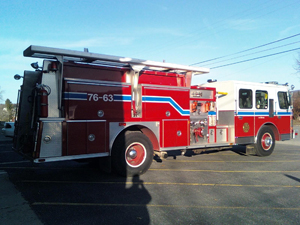 Repurposing and refurbishing fire apparatus is taking on new importance these days as fire departments continue to struggle with dwindling financial and staffing resources, and manufacturers try to find ways to fill in the holes in fire department fleets.

Precision Fire Apparatus in Camdenton, Missouri, has a case in point, says Jim Keltner, who owns the business with Brad Johnston and Stacy Robertson. “We recently completely refurbished a 1989 E-ONE pumper on a custom chassis that we bought from a fire department in New Jersey,” he says, “and compared with a new pumper, the newly-titled Precision pumper will save between $50,000 and $65,000 for an end user.”

The Refurb
The vehicle in question was built on a Spartan MetroStar X chassis with an advanced protection airbag system, Keltner says. “That’s the Spartan limited option chassis that’s designed to carry an engine up to 450-horsepower (hp),” he points out. “We cut the beavertails off the back of the vehicle, made it into a flatback pumper, and then tested and reviewed the gearbox and all the vales on the Hale 1,500-gallon-per-minute (gpm) QSMG pump, which flowed 1,630 gpm after our tests and repairs.”

Precision installed a new 1,000-gallon UPF Poly tank in the vehicle; updated all of the apparatus lighting to Whelen LED warning, compartment, and scene lights; refinished the inside of all the compartments; checked the body for cracks or stress areas and made repairs where needed; repainted the entire apparatus, installed chevron striping on the rear; and added non-slip material to all walking surfaces. All the compartmentation remained the same, except for the beavertail compartments that were removed.

The time frame for completing a refurbishment can vary depending on the amount of work needed, as well as the availability of parts. In this particular case, Keltner says the new Spartan chassis arrived January 14, 2013, and Precision rolled out the finished product on February 8.

Stocking Refurbs
Keltner notes that Precision Fire Apparatus anticipates refurbishing a number of vehicles and putting them into its stock this year. “We’re working on one now that started life as a 1992 E-ONE Hush pumper,” he says. “We will put it on a Spartan MetroStar X chassis, but it’s a challenge because we have to change the gear box, shaft ,and drive components on the Hale 1,500-gpm pump and make sure all the drive angles are correct. There’s about $8,000 worth of parts plus labor just to modify the pump.”

Keltner points out that Precision has a working relationship with another company he owns—Jon’s Mid America Fire Apparatus, of Rogersville, Missouri, which has been a KME dealer for the past 15 years covering Missouri, Arkansas, Oklahoma, and Kansas. “We’re also one of the largest used fire truck dealers in the country,” he says. “Buying and reselling used fire apparatus is the largest part of our business.”

Precision Fire Apparatus also has an ongoing relationship with Sutphen. “We’ve built many rear-mount and other pumpers on Sutphen chassis,” Keltner says, “and we’ll continue to support their Sutphen-Precision dealer network around the country.”

He adds that “Our strengths boil down to having a lot of good, talented people who do amazing work in turning out a quality product.”