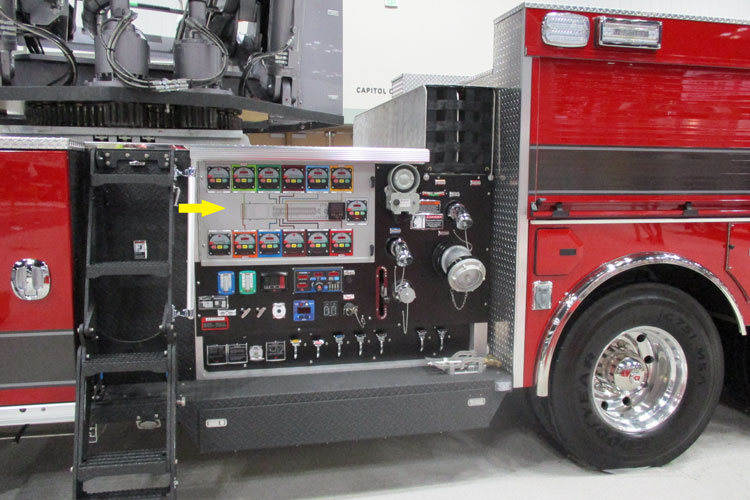 A computer-literate Raisin brought a laptop to morning coffee for the Raisin Squad to review trade show photos I saved on one of those plug-in flash-something do-hickeys. Contrary to public opinion, Raisins are not just senile, toothless old white hairs yearning for the days of riding the tailboard, spittoons in the fire hall, and open cabs. There are a few past chiefs, a fire commissioner, retired people from the fire truck business, and some former firefighters wanting to remain relevant. Although biased to yesteryear, some of them can pick out features the younger generation doesn’t always see. Unlike hair, teeth, eyesight, and hearing, experience can’t be taken away although occasionally forgotten. Their occasional critical and condescending comments about the rigs and each other are in italics. Mine are not. 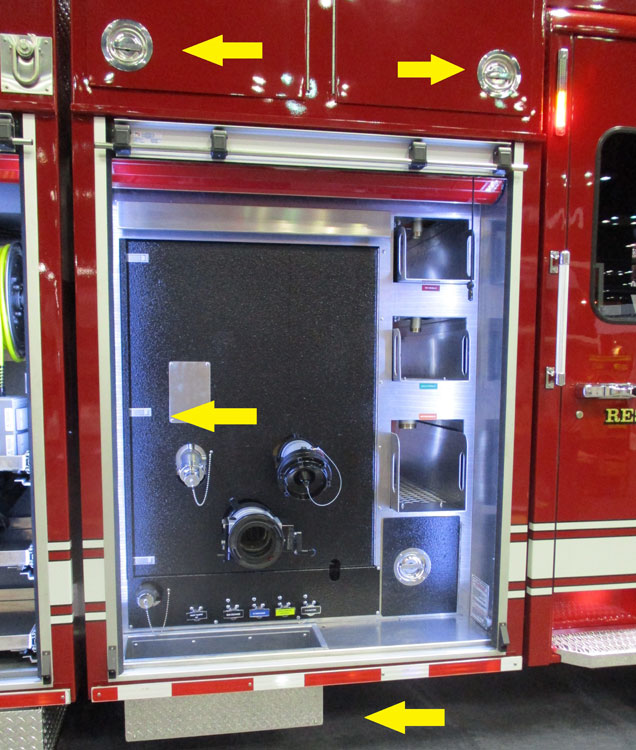 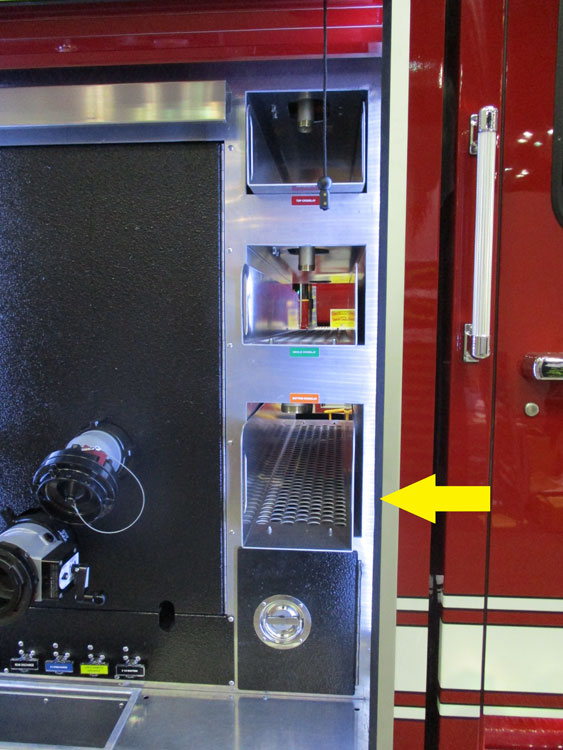 These curbside views of an enclosed pump panel drew pro and con comments. It’s nice and clean. There’s a full-height hinged access panel as wide as the pump house. Pop off three fittings and there are only three latches to open it. That’s well and good, but how the hell do you reach those latches on the compartments above the panel. You can’t get anything out of them. There ain’t no slide-out step under the panel ‘cause they put a hose trough there. One geezer noted the metal trays for the speedlays had perforated drain holes. Betcha they don’t weigh as much as them plastic ones. It should keep the hose dry, so it doesn’t smell like your socks. You should change your socks more than once a week. 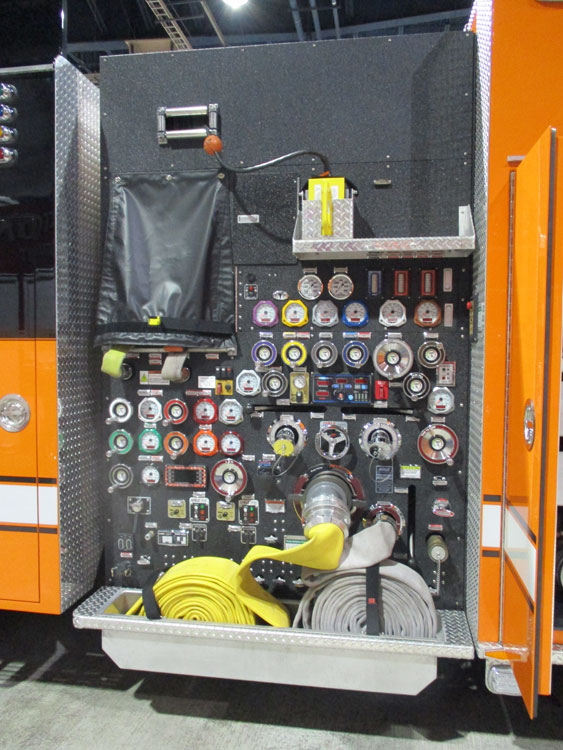 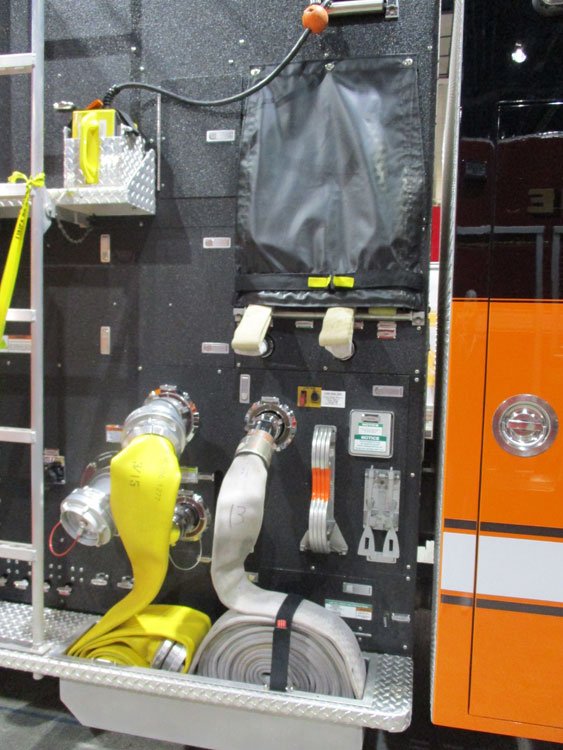 The pump panels on this rig got them going. There are too many gauges. The old Mack only had three—water in, water out, and the tach. This one’s too confusing. Why all the preconnected curb jumpers? The rig has short stubbys on a 2½-inch discharge, an LDH discharge, an LDH inlet and a 2½-inch pony suction. What difference does it make if you disconnect a hose, a plug, or a cap to hook up a line? The curb jumpers are there if you need them and not taking up compartment space. I don’t like the way it looks. At least donut rolls are easy to stretch. I said panel-mounted 2-inch discharges (two each side for the crosslays) are easy to reach. Yeah, with my arthritis, I can’t reach inside and hook hose to them chicksan swivels. 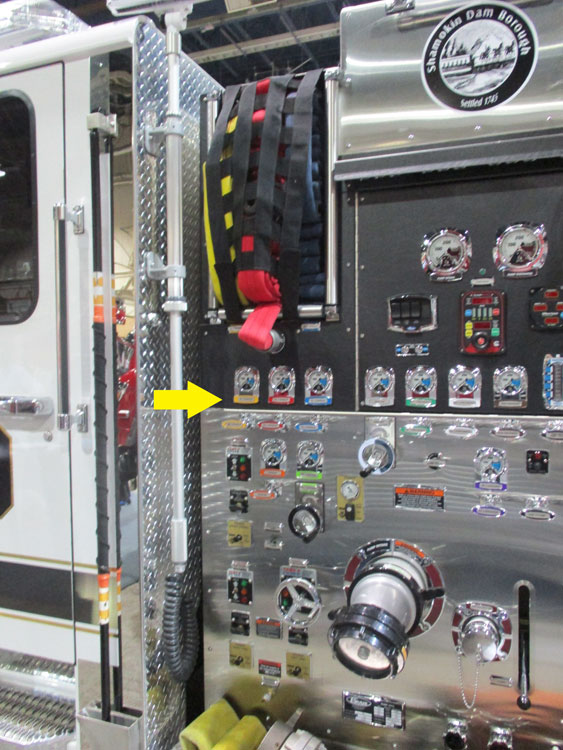 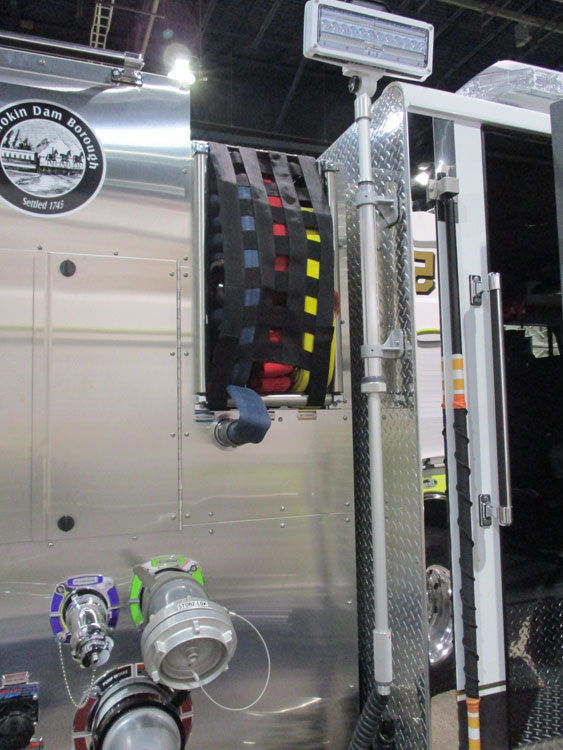 The crosslays on this pumper had them baffled. One noticed only two of them had hose connections on each panel—one each side. That’s a good idea having a dead crosslay with spare hose. You’re right; no one carries spare hose anymore. Yep, lately they only carry preconnects and supply line. One with better eyesight said, Look at the pump panel gauges you old fools. That third crosslay’s supplied by a swivel. There’s three gauges with handles directly below them including the yellow one (arrow). I said the yellow crosslay could go either way. Don’t start that transgender stuff with hose loads! But, but, where do they carry the spare hose? 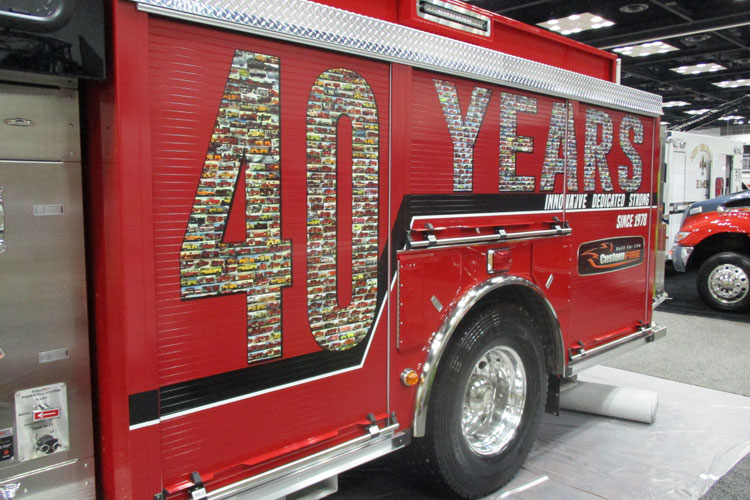 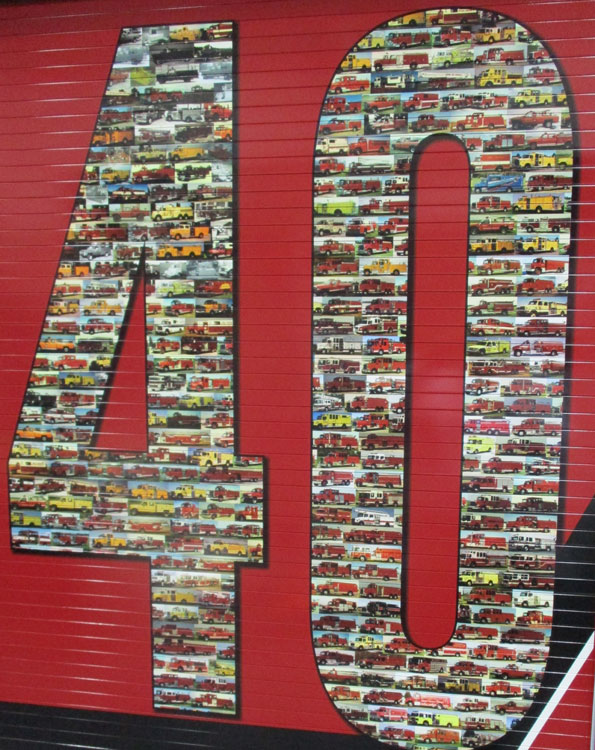 One raisin who forgot his glasses didn’t like the gold leaf job in photo 7. It’s awfully blurry. He got straightened out, You’re as blind as a bat. That ain’t gold leaf. Its pictures of all the rigs that company (CustomFIRE) has built. 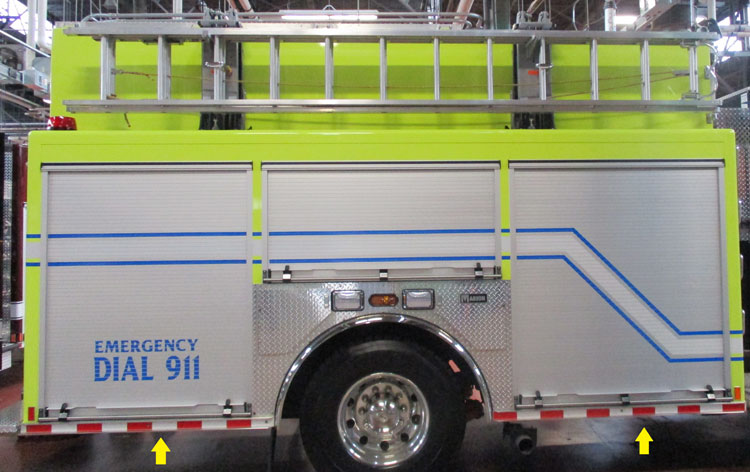 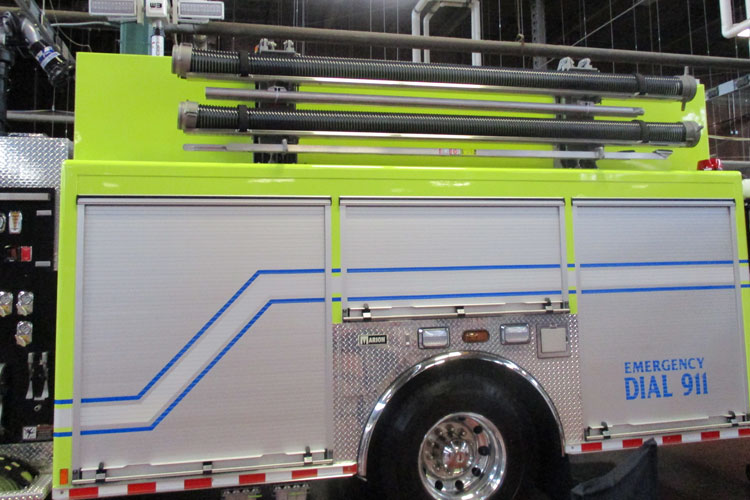 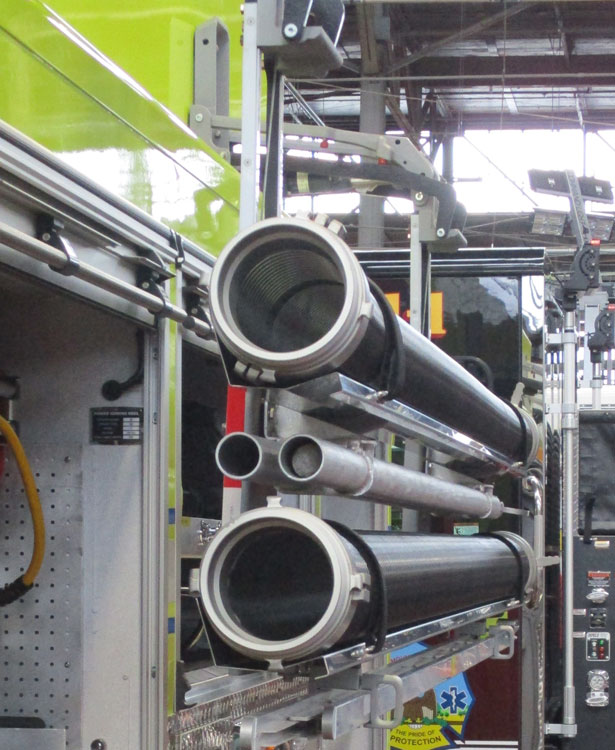 These pictures started a marathon about ladder racks. This pumper has an out-and-drop down rack on each side attached to the hosebed side sheets. That’s dumb having them up so high. I explained it’s a good place to put stuff that isn’t used that often. Maybe they only use ladders and suction hose once in a blue moon. Besides, sliding them in the rear takes up compartment space or displaces water in the booster tank, raising a rig’s overall height. Well, the racks are too close to the doors when lowered. You hafta get your stuff out of the compartments before you lower it. They didn’t care if the apparatus manufacturer made the racks, if a third party supplied them, or if you can have them extended further away from the doors. And, they didn’t want to hear if they were center pivot, had the arms on the ends, or if the ladders were stored flat or on their beams. I said Ziamatic’s catalog has eight pages describing various rack systems. It ain’t natural. Your hair and teeth aren’t either. Maybe I’ll do a piece on ladder racks. Only if you can remember.

One overly critical white hair said These compartments ain’t the same. What? Count the Scotchlite strips.  What? He noticed there’s fewer alternating red and white strips in the rub rail beneath the compartment behind the rear wheels than in the one ahead of the rear wheels. So what? It’s not right. They should be the same. A lengthy explanation on OH (the distance from the centerline of the rear axle to the rear step) affecting the rear angle of departure fell on deaf ears. This geezer had his mind set that the compartments should be the same size.

He had a point but not a valid one if it was only because it doesn’t look right. Shane Krueger, Sales/Product Development Manager for Marion Body Works said “I’m a big fan and try to encourage customers to use equal sized compartments before and after the axle unless job specific equipment requires the width to be specialized. This allows the customer flexibility later to move trays and shelves. Who knows what equipment they’ll have to carry in the future?” 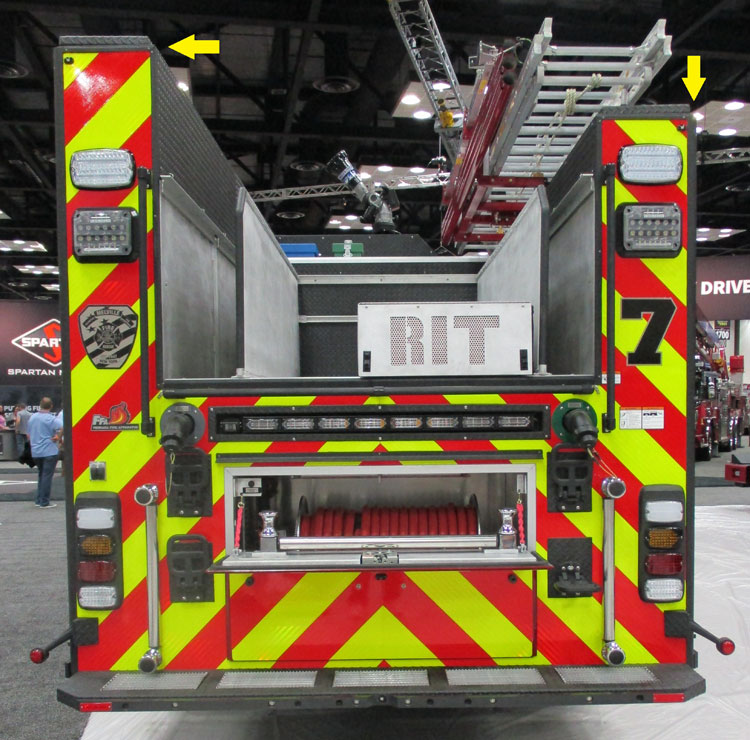 Photo 12 showsa ladder rack with horizontal (flat) storage extending over the hosebed and half-depth upper compartments. Ya hafta raise it to load the hose. Saying it was a small price to pay and the alternative would be losing space in the hosebed, the compartments or the booster tank were ignored. Are the left side compartments higher than the right side so it looks level? I don’t know. You ought to. You used to sell this stuff. 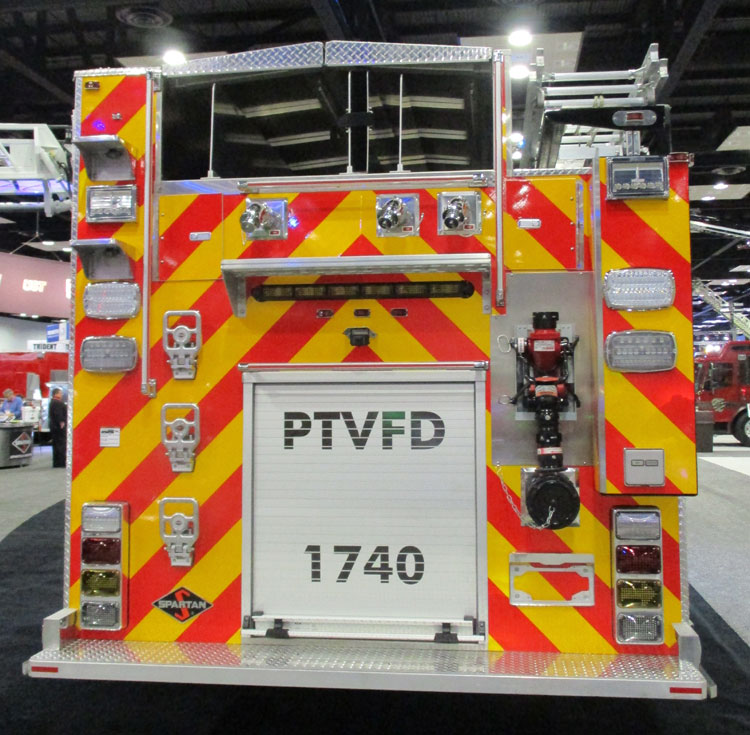 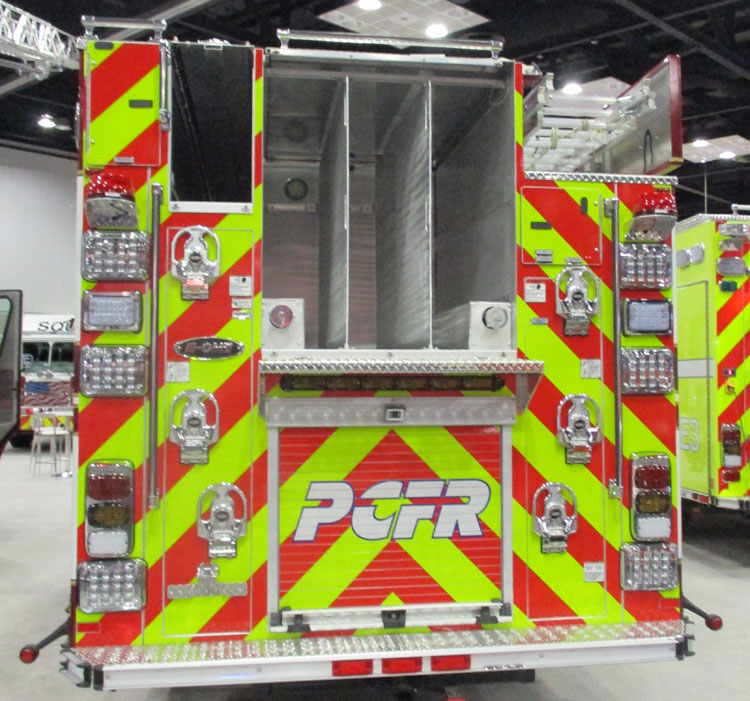 The rig in photo 13 has a similar rack with storage above full-depth compartments as does the one in photo 14. Just because more than one company builds them doesn’t mean it’s right. Some crotchety old people wouldn’t be happy with apple pie, sunshine, fresh air, and sliced bread. Thankfully they are no longer in a position to buy—or sell—fire trucks. 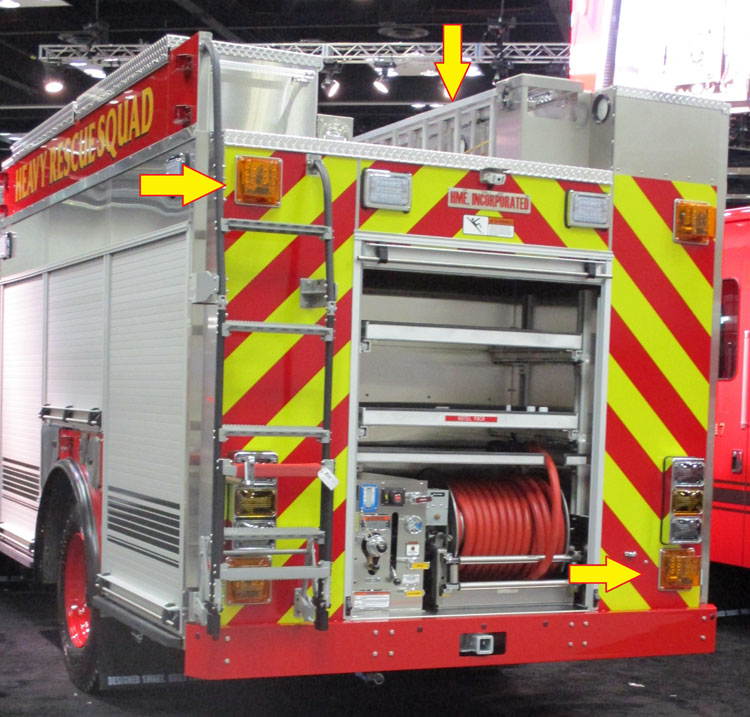 They jumped all over a heavy rescue for Detroit in photo 15. Why are they carrying a ladder on a squad? Why ain’t it lower where ya can reach it? I said it was Detroit’s business what they carried where. Detroit is a busy and big enough department to know what they’re doing. Besides, I only took the photo to show how ladders can also be carried in the same area as the hosebed on a pumper. It’s a squad; it’s not a pumper. Why are you trying to confuse us? Because it is easy. Then one of them popped off about the rear warning lights (horizontal arrow shows one of four. This thing doesn’t have any rear red lights; they’re all amber. He didn’t care if NFPA says you can have amber in the rear. It’s not right. All fire trucks have red lights. 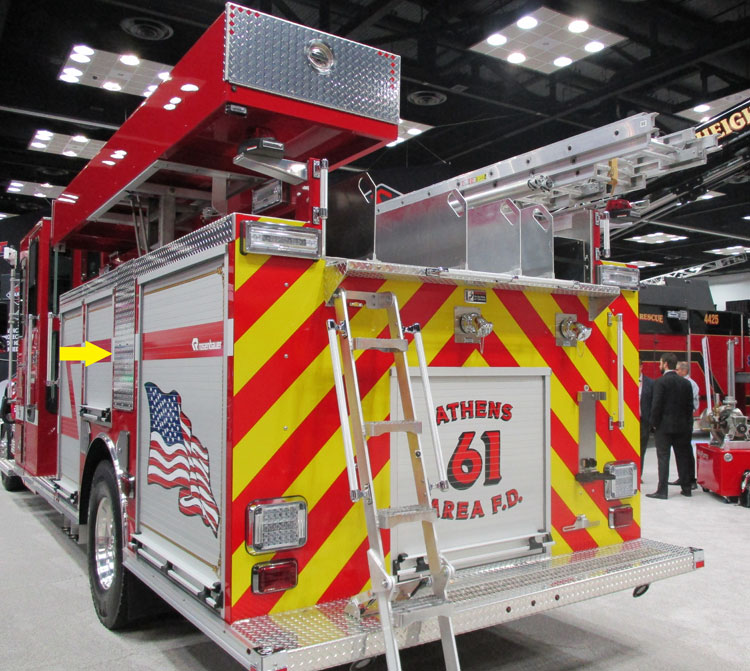 The dual racks in photo 16 really got them going. Regardless of the functionality of the rig, the Raisins tore it up. Its ugly looking. I said it looks like it works. They’ve got a decent ladder complement on the curb side and probably hard sleeves, et al in the enclosed “box” on the road side. And, they didn’t lose any tank or hosebed capacity. It appears the box and ladders in the raised position are about the same overall height as the crew cab. They only lost part of the over-the-wheel well compartment for the center pivot (arrow). Well, it ain’t pretty looking. It looks like the manufacturer built the rig around what the department wanted to carry. Young ones today are more interested in looks than how it works. 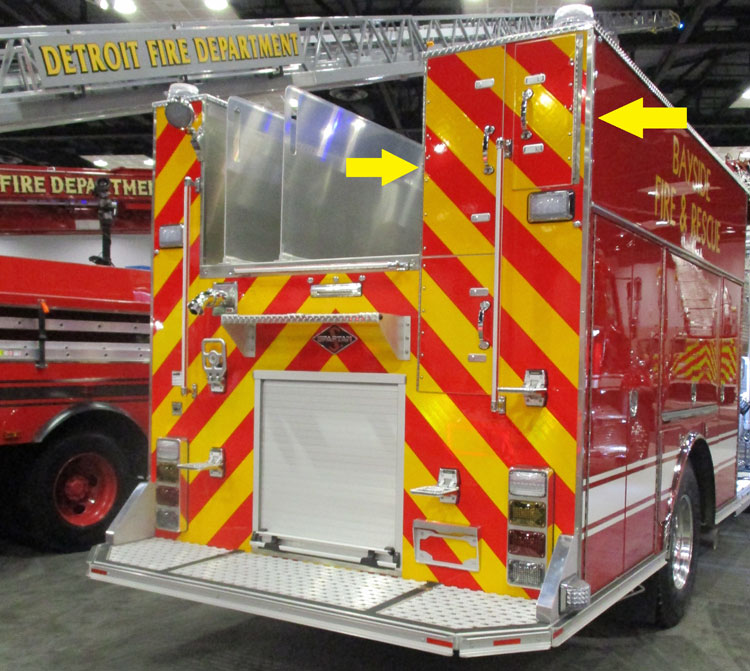 The squad jumped all over the rig in photo 17 because the two upper compartments on the rear right side are so high up in the air. One old-timer commented, It shouldn’t be too hard to reach because there’s a big rear step. It’s full width and 24 inches deep. Yep, ya don’t see steps like that anymore. Reminds me of our ’51 La France. We could carry at least a half dozen or so guys back there. You can carry more people on this one. He forgot his department pulled firefighters off the back step in the 1980s. 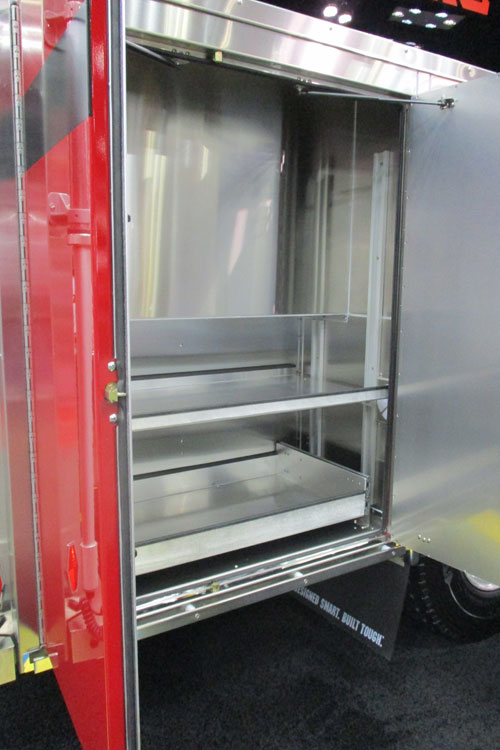 Photo 18 shows the interior of a stainless steel compartment. Why didn’t they paint the inside? It don’t look right. It probably can save the department a lot of money, perhaps thousands depending if they paint it or use a coating like Line-X. That’s a good reason. 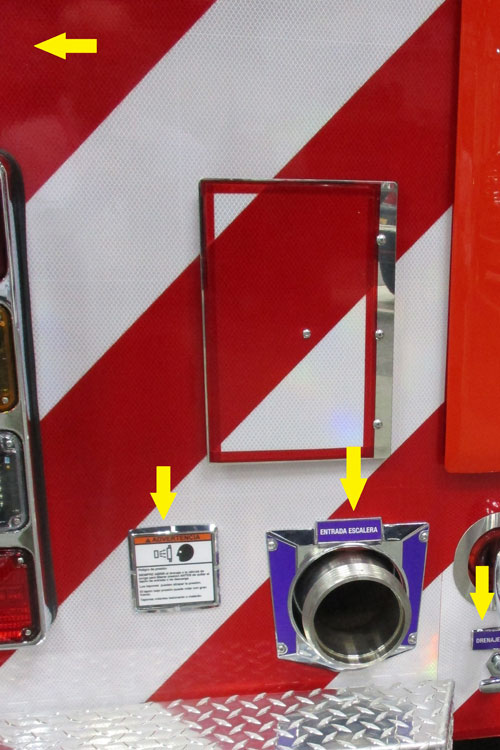 Look at that—the words are in Spanish! was the reaction to photo 19. Why in the world is the lettering in Spanish? Probably because it’s going to a country where they speak Spanish. Oh, I didn’t think of that. (And, this guy used to drive a fire truck!)

You don’t often see “diagrammatic” pump panels on quints like the one in photo 20. Why do they need a picture of the fire truck on a pump panel? If they’re smart enough to drive it, they should be smart enough to read the words on the gauges. What’ll they come up with next? 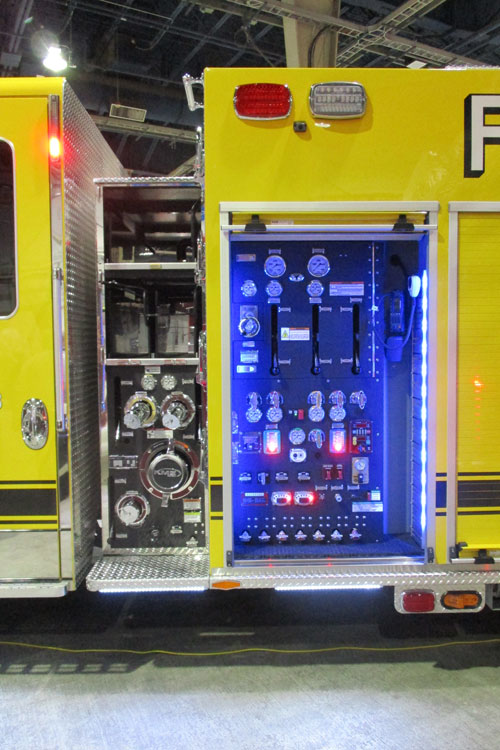 The pumper in photo 21 has blue lights illuminating the pump panel. Didn’t you have a picture LAST YEAR that showed the same thing? I told them I took this picture a couple months ago and can’t remember what pictures I took last year. That figures. You’re as old as we are.