A pump, water tank, and hose storage space carried on an aerial ladder or platform has become a common sight in fire department fleets. The popularity of quints, which carry a pump, water tank, hose, aerial device, and ground ladders, can’t be denied, and firefighters are praising the versatility, offensive capability, and handiness of these rigs.

Randy Hummer, aerial account manager for Spartan ER, says interest in the quint concept, which took off in the 1980s, has steadily increased over the years, especially in rear-mount ladder applications. “We’re seeing an increased interest from suburban departments that have never had a quint before but are purchasing quints in rear-mount or tractor-drawn aerial (TDA) configurations because of their multifunction ability and maneuverability,” Hummer points out. “We are seeing a lot more activity in 75-foot aerial quints, and we expect that to continue through 2021.” 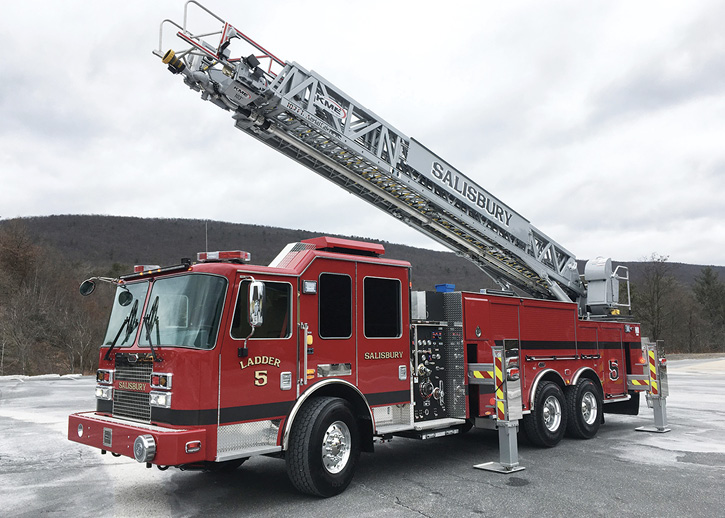 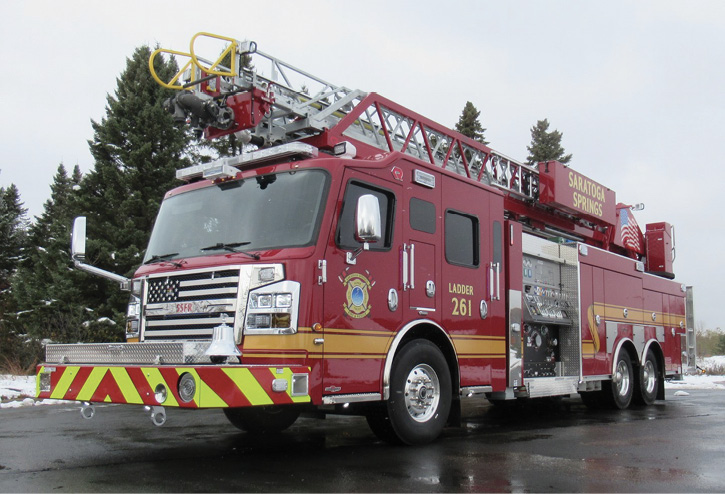 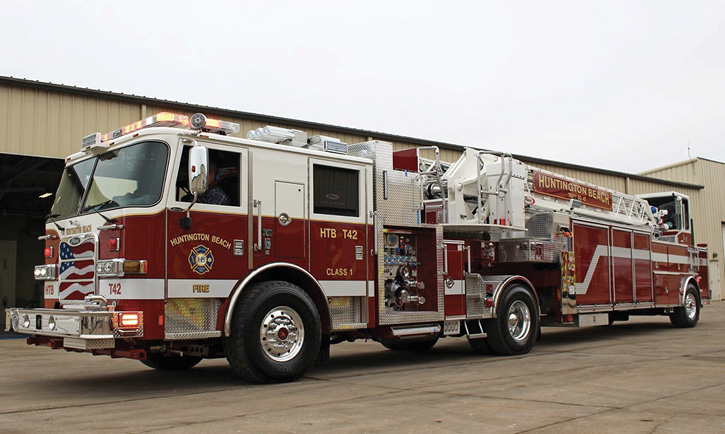 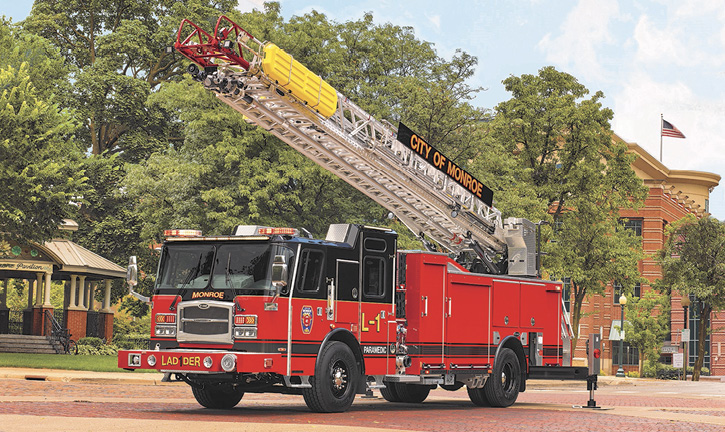 Pete Hoherchak, product manager for KME, says KME makes its Tuff Truck™ in a quint configuration with a cab and body width as narrow as 96 inches and with a wheelbase as short as 198 inches. “It’s built to navigate around tight city streets,” Hoherchak says, “and is designed with four H-style stabilizers that fully extend to only 12 feet, allowing for positioning and setup on up to an 11-degree slope. The Tuff Truck quint has a 103-foot four-section ladder with a tip load of 500 pounds that can go from negative 12 degrees to plus 80 degrees, can be built on any cab and have any pump, has a water capacity of 650 gallons, and has up to 249 cubic feet of body compartment capacity.”

Brandon Whittaker, aerial sales manager for Rosenbauer, says, “There are still areas in North America that run strict truck companies with no pump or water tank, but most departments are buying quints so they can show up with water for fire suppression and use the rig as a multipurpose vehicle.” He notes that Rosenbauer’s Viper 100-foot and 109-foot Viper aerials are very popular when outfitted as quints, each model typically carrying at least a 1,500-gpm pump and a 500-gallon water tank in addition to a full ground ladder complement and a supply line hosebed.

“Our Cobra platforms, the 100-foot midmount, 101-foot rear mount, 104-section rear mount, and 101-foot King Cobra with an articulating jib boom, all can be set up as quints, as can our 115-foot T-Rex articulating platform,” Whittaker points out.

Tim Smits, senior sales manager of aerial products for Pierce Manufacturing Inc., estimates that approximately 80 percent of the aerials that Pierce builds are quints. “Fire departments want more versatile, maneuverable, Swiss-Army-knife-type vehicles, and a quint fits that description,” Smits says. “They also are popular because of reduced budgets where departments are trying to combine two vehicles into one instead of purchasing a pumper and an aerial. Also, some departments have staffing issues where they don’t have the personnel to man both an engine and aerial.”

Smits says that Pierce’s single rear axle Ascendant 107-foot aerial ladder quint and the Ascendant 110-foot aerial platform quint have found great popularity. “Departments can run them as both an engine and a truck, and they’re also being used on emergency medical services (EMS) calls because in terms of maneuverability, they are like driving a pumper. Most of our quints are running 2,000-gpm pumps, carry four discharges to meet the pump capacity, three crosslays, 500 gallons of water, ground ladders, and supply line in a hosebed.” Smits adds that another quint model that’s gaining in popularity is Pierce’s midmount quint TDA, which has a reduced wheelbase to improve its maneuverability and reduce tail swing.

Paul Christiansen, aerial sales manager for Ferrara Fire Apparatus, says that almost every aerial that comes off Ferrara’s production line has a pump and tank on it. “We’ve seen quints on longer aerials more and more in recent years,” Christiansen observes, “with 100-footers overtaking the 75-foot quint market. The typical quint carries 500 gallons of water and a 2,000-gpm pump, and a quint we recently built for Travis County ESD #2/Pflugerville (TX) has full depth and height compartments on both sides, with LDH storage in the ladder tunnel and a 50-inch-long hosebed at the right rear for high-rise packs.” 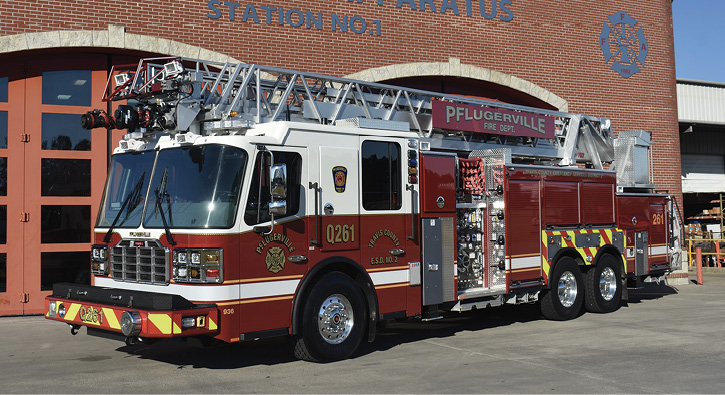 Joe Hedges, product manager for chassis and aerials for E-ONE, says E-ONE can make a quint out of any of its aerial models including 75-, 78-, and 100-footers. “The 100-footers and 75-footers are the most popular versions in quints,” Hedges points out. “Departments like them for the multiuse role the vehicle fills—that is, fire suppression, ladders, and carrying lots of equipment. Plus, they are small and maneuverable. About 60 to 70 percent of the aerials we build have pumps and tanks on them.”

Zach Rudy, director of sales for Sutphen Corp., says Sutphen makes three models of quints: the SL75, SP70, and SL100 midmount aerial ladder quints. “The SL75 and SP70 are both single-axle, short-wheelbase quints that drive and ride like a pumper but with an aerial device on top,” Rudy says. “We are able to put a pump and tank on any of our aerial products but also can offer an all ladder company truck if that’s what the department wants. Our SL100 aerial ladder quint usually carries a 1,500- to 2,000-gpm pump, up to 500 gallons of water, and has up to 300 cubic feet of usable compartment space.” 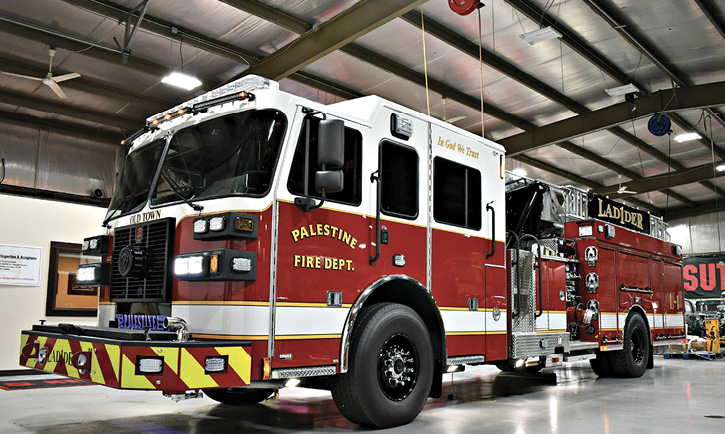 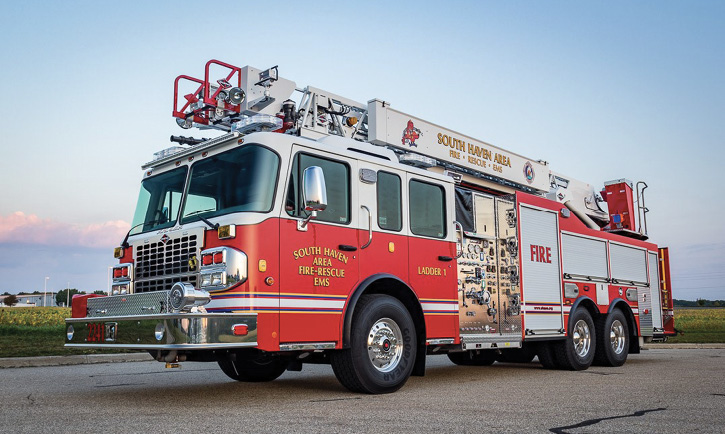