Quick-Attack Trucks, Mini Pumpers Continue to Be Mainstays in Many Departments

Shorter wheelbases for quick maneuvering, speedy response times, and the ability to easily get water on a fire fast all are advantages that proponents tout when talking about quick-attack trucks and mini pumpers.

From east to west and north to south, fire departments are having manufacturers build smaller units that are carrying larger pumps and performing many functions that typically are done with Type 1 pumpers.

Darryl Rhyne, general manager of Sutphen East Corp., says that Sutphen has built a variety of smaller fire vehicles in the past year that fall into two distinct categories. “One group of customers wants the best quality and a big option base to choose from to provide flexibility in the design elements,” Rhyne points out. “The other group treats a smaller pumper more like a commodity vehicle where they use it for a certain period of time and then turn it over like they would with an ambulance.”

Rhyne says Sutphen recently built a mini pumper for the St. Hedwig (TX) Fire Department on a Ford F-550 chassis with a split-shaft Hale 1,250-gallon-per-minute (gpm) pump, a 300-gallon water tank, recessed LED lighting, a brush guard at the front, and a Line-X-style blackout package instead of tread plate. Likewise, the Port Ewen (NY) Fire Department had Sutphen build a similar mini pumper on a Ford F-550 with a Hale 1,250-gpm pump and 300 gallons of water, while the Madisonville (PA) Fire Department got a Sutphen-built mini supply truck on a Ford F-550 chassis and flatbed body with a Hale 1,250-gpm pump but no water tank. “The mini carries hard suction lengths and supply line hose,” Rhyne notes, “and is designed to go to a water source, draft, and pump.”

Todd Nix, apparatus consultant for Unruh Fire, says Unruh is building a mini pumper for the Mid County (MO) Fire Protection District with a split-shaft Waterous 500-gpm pump, a 300-gallon water tank, a 12-foot rescue body covered in Line-X inside and out, and Super Single wheels and tires. The rig will have two preconnects and a booster line off the rear.

Troy Carothers, AutoCAFS manager for W.S. Darley & Co., says Darley has built a lot of quick-attack pumpers on Ford F-550 chassis and more recently on the Ram 5500 chassis because of its 300-horsepower (hp) diesel engine option and transmission that can lock up to take a midship pump. “The fire departments that think of them as quick attacks use them as first-out vehicles to get to the scene and put water on the seat of the fire quickly,” Carothers says. “These lower and narrower vehicles are able to get into tough driveways that might have steep inclines or declines because they are more maneuverable than full-size pumpers.”

1 Sutphen built this mini pumper for the Port Ewen (NY) Fire Department on a Ford F-550 chassis with a Hale 1,250-gpm pump and a 300-gallon water tank. (Photo courtesy of Sutphen East Corp.)

Carothers says Darley always recommends four-wheel drive on its quick attacks, and more often than not installs four-door cabs with the rear bench seat removed and replaced by Bostrom self-contained breathing apparatus (SCBA) seats. “Limestone (OK) Fire Protection District has bought a lot of Darley trucks over the past 20 years, and almost all of them have been compressed air foam system (CAFS) trucks,” he points out. “They have our Wildland Attack Structure Protection (WASP) pumper on a Ford F-550 chassis with a midship Darley PSMC 1,500-gpm pump, 300-gallon water tank, 25-gallon integral Class A foam tank, FoamPro 2001 foam system, and 120-cubic-feet-per-minute (cfm) rotary screw air compressor.”

The Limestone Fire Protection District also is having Darley build two quick-attack rescue units, Carothers adds. “Each will have a 350-gpm Darley HM350 power takeoff (PTO) driven pump and 300 gallons of water on a Ram 5500 four-door chassis,” he says. “The copolymer tank is integrated into the rescue body, which has three compartments on each side with slide-out and roll-out trays in the full-height compartments and an integrated Stokes and backboard storage slide-out in the transverse cabinet.”

Mike Weis, president of Weis Fire & Safety Equipment Co., points out that Weis Fire has been building a lot of trucks for fire departments to be used primarily for deployment to western states. “These are four-wheel-drive vehicles with four-door cabs, large equipment storage, 400 gallons of water, a booster reel, foam, spray bar nozzles, and a small gasoline or diesel pump tied into the chassis fuel system.”

Mike Sweitzer, director of sales for Pierce Manufacturing Inc., says customers who come to Pierce for mini pumpers or quick-attack vehicles usually don’t want to run their Type 1 pumpers on every call, often are concerned about fuel consumption and maintenance, and want the maneuverability that a smaller rig offers. “Two years ago, we completely redesigned our mini pumper to reflect changes that Ford made to the F-550 chassis, allowing us to make dramatic changes to the body and compartments,” Sweitzer says. “All pump controls are behind a roll-up door; the crosslays and speedlays are in removable trays; the over-wheel-well compartment is now at waist height; and we use fender panel areas for configurable items such as wheel chocks, SCBA bottles, fire extinguishers, and flares.” 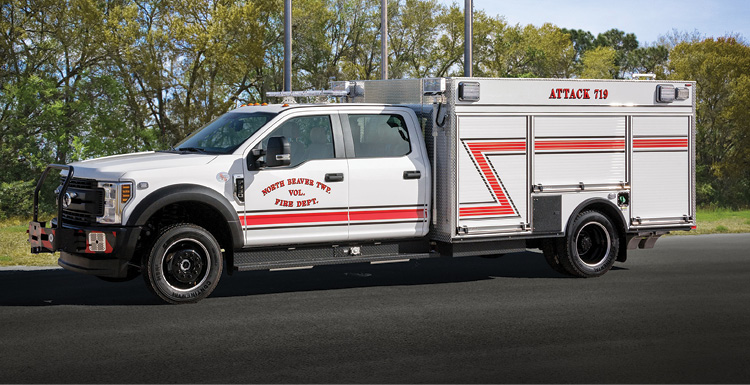 Sweitzer notes that Pierce offers a Waterous 1,500-gpm midship pump on its mini pumper along with a 300-gallon water tank and either a Pierce Husky 3 foam system or a FoamPro 1600 foam system. “The 96-inch body is all aluminum and has 190 cubic feet of compartment space with load ratings of 500 pounds for the body compartments and 100 pounds for those in the fender areas,” he says. “The mini pumper also has a good size rear compartment, and we can enclose ladders in the body, along with hard suction and long tools. The mini pumper has become a very versatile vehicle for fire departments.”

Amey Kelkar, product manager for pumpers and tankers at E-ONE, says his company recently built a mini pumper for Pasco County (FL) Fire Rescue for use to protect a remote travel trailer/recreational vehicle 55-and-over resort. “Their closest fire station is 20 minutes away, and the vehicle was to be staffed by volunteer firefighters on site, so they wanted an ease-of-use truck, easy to maneuver, with a low hosebed and low crosslays,” Kelkar says. “We built it on a Ford F-550 4×2 chassis and four-door cab with a 1,000-gpm Hale MG pump, 300-gallon water tank, two 1¾-inch crosslays, and enclosed ladder and backboard storage. There are no SCBA in the cab, instead there are three SCBA above the rear wheel compartment.”

Bret Cerini, sales manager of wildland products for KME, says most of the quick-attack rigs KME has sold have been to departments east of the Mississippi River. “They usually have access issues where there are congested, tighter roadways that a quick-attack truck lends itself to,” Cerini says. “There are other departments with access issues in more rural areas where a full-size rig can’t get down a driveway, so they use the quick attack to lay a line in from a water source and provide initial attack capability, and if it’s an extended fire attack, the vehicle becomes a water manifold.”

6 The Cub Run (KY) Fire Department had Unruh Fire build this mini pumper on a Ford F-550 chassis with a Waterous 500-gpm split shaft pump, a 300-gallon water tank, and a 12-gallon Class A foam tank.

Craig Weeks, vice president of apparatus design at Boise Mobile Equipment (BME), says BME has seen “a significant volume of purchases in Type 6 vehicles, which are relatively inexpensive, are typically 4×4 and four-door, are cost-effective, can get places where larger apparatus can’t, and don’t need special licensing to drive them.” Eighty percent of the Type 6 rigs BME has built have diesel-powered pumps that will provide 120 gpm at 150 pounds per square inch, usually a Darley 1.5 AGE model but sometimes a Hale HP100.

Joe Messmer, president of Summit Fire Apparatus, says departments have asked Summit to build mini pumpers on Ford F-550 chassis because “they want something smaller to get out of the station and get the job done. Another reason is to get down long, narrow driveways not accessible to larger pumpers or to get around behind subdivisions where the going is tight,” he adds. “With a drop-drive shaft on the F-550, we can use up to a 1,250-gpm pump and then add a 300-gallon water tank.” 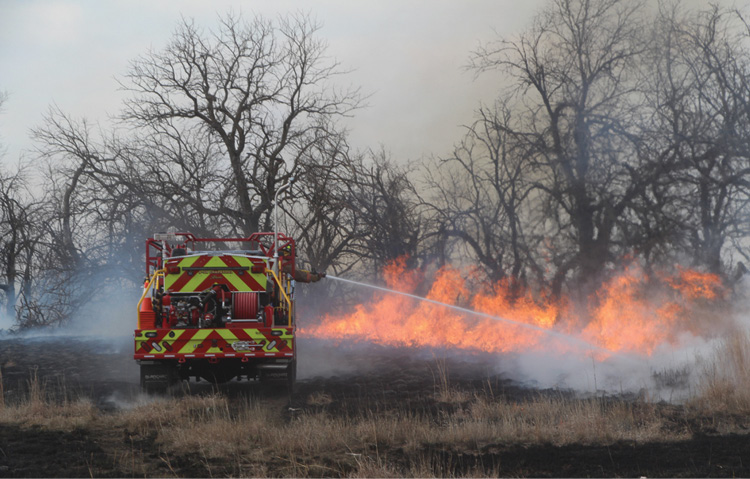 Jim Keltner, president of Jon’s Mid America Fire Apparatus Inc., says Jon’s recently sold a small rescue first-response unit built on a Dodge 3500 chassis to the Chadwick (MO) Fire Department. “They’re a small volunteer department and wanted a vehicle that could be a wet rescue and brush truck for them,” Keltner says. “This unit carries a Tri-Max 30-gallon CAFS on it, so they have fire suppression capability when they go to motor vehicle accidents.” 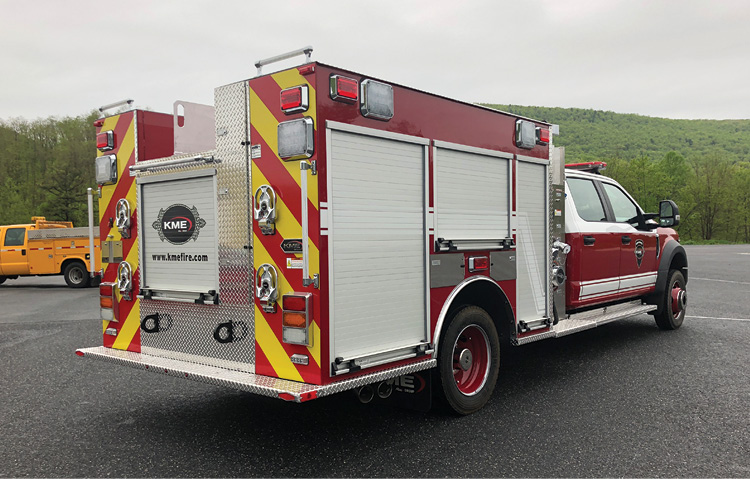 10 KME builds mini pumpers and quick-attack rigs like this one on a Ford F-550 chassis and four-door cab carrying a 1,250-gpm pump and 300-gallon water tank. (Photo courtesy of KME.)

Bill Doebler, vice president of sales at HME Ahrens-Fox, notes that the company brought out its MiniEVO quick-attack mini pumper about five years ago and has been successful with it. “It has a 1,500-gpm midship pump, carries either 300 or 400 gallons of water, and can be packaged with either foam or a CAFS,” Doebler points out. “These vehicles can make an initial attack like a Type 1 engine. But, they aren’t replacing the Type 1; they are an addition to the department’s capabilities.”

Doebler says HME Ahrens-Fox can put a 24-inch-wide pump house on the MiniEVO to allow it to maximize the size of the body for storage. “If the department is carrying a lot of equipment, we steer them toward a 300-gallon water tank,” he adds, “but if they will be light on equipment or using the vehicle for rescue first response, then we would consider a 400-gallon tank.”

Jason Black, president of MTECH Inc., says his QTAC Fire division is building mini-pumpers on Ram 5500 chassis using a PolyTough™ body and carrying a Waterax B2X high volume pump, a 400-gallon water tank, and preconnects and a remote turret at the front.

Bill Davidson, vice president of Skeeter Brush Trucks, says the 6×6 Ford F-550 chassis Skeeter has been building on is getting a lot of notice. “It has the capabilities of a Type 3 pumper but not the expense or size of a Type 3,” Davidson says. “The vehicle has two rear drive axles, and the suspension is lifted for Super Single wheels and tires. Wheelbase is 204 inches for the four-door model, and the vehicle carries a 500-gpm pump and 500 gallons of water.”

Greg Blanchat, president of Blanchat Manufacturing, notes his company has installed 500-gallon water tanks on Ford F-550-chassis mini pumpers and has started putting 600-gallon tanks on the chassis with added rollover protection. Typically, there’s a single pump on the rigs, often a Hale HP200 pump that delivers 120 gpm at 120 psi for pump-and-roll. 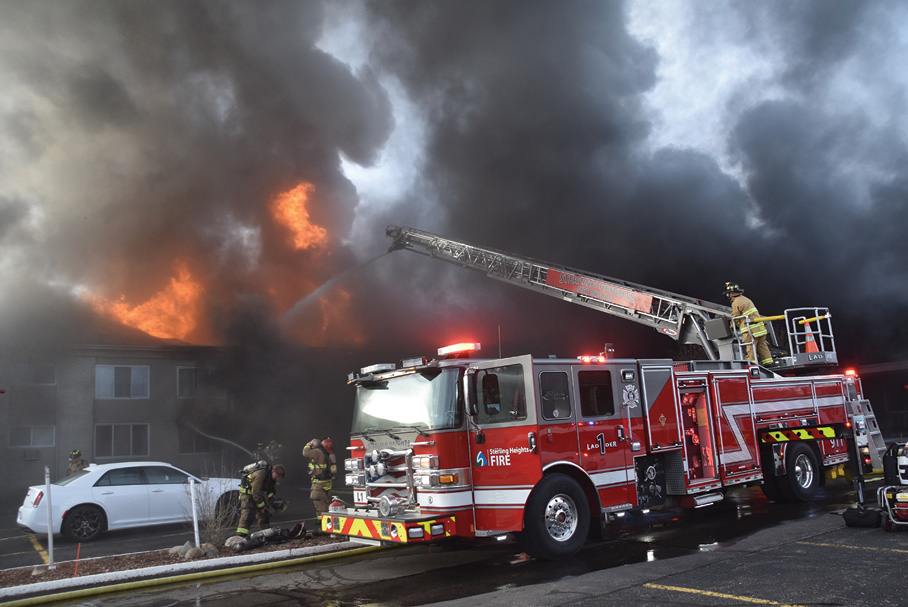 Sterling Heights (MI) Fire Department Ladder 1, a 2017 Pierce Enforcer PUC with a 1,500-gallon-per-minute pump, a 500-gallon water tank, and a 107-foot Ascendant aerial, responded to a three-alarm fire that did heavy damage to an occupied apartment building. (Photo by Daniel Jasina.)