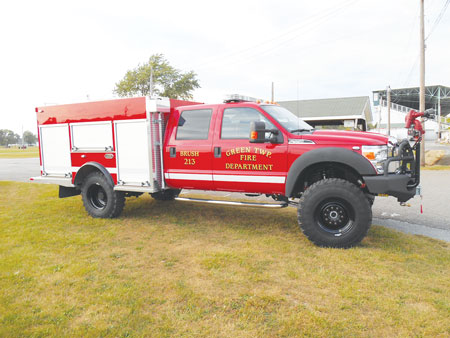 The Green Township (OH) Fire Department needed to replace a 1968 Jeep brush truck that had a single seat, a pump beside the driver, no roof, and no heater. But, the department wanted its new truck to be a multiple-use vehicle that could also run to vehicle, dumpster, and rubbish fires as well as serve as a backup medical rig.

“We also wanted the new truck to haul multiple firefighters, which meant a crew cab,” says Todd Baird, Green Township’s chief. “The other major thing we wanted was a truck with super singles on it, instead of dual rear wheels, because of all the mud we have to deal with in Ohio. We have a lot of farmland where we often have to get to the other side of a plowed field in order to put out a fire.”

Ray Capezzuto, apparatus salesperson for Warren Fire Equipment, which sold previous KME pumpers to the department, got together with the truck committee and helped design a quick-attack truck to fit its needs. “The department got a Federal Emergency Management Agency (FEMA) grant and used the Ohio State Terms Schedule (Ohio STS) to purchase the vehicle from KME,” Capezzuto says. “One of the things they did was to go with a gasoline engine instead of a diesel because of the weight differential between the two types of motors, with the gasoline motor being lighter.”

The resulting quick-attack truck is on a Ford F-550 4×4 chassis with a crew cab, powered by a V10 Triton gasoline engine and a Torqshift six-speed automatic transmission. The rig features KME’s 122-inch-long 3⁄16-inch aluminum skid unit body that holds a Hale HPX 200-B18 skid pump driven by a Briggs & Stratton 18-horsepower gasoline engine putting out 60 gallons per minute (gpm) at 150 pounds per square inch (psi), 150 gpm at 100 psi, and 245 gpm at 25 psi.

The vehicle has a 300-gallon water tank with a 10-gallon integral foam tank, a FoamPro 1601 direct-injection foam system, all stainless steel piping, an Akron Brass 3465 forestry monitor controlled by a 6035 CAN joystick inside the cab, two Elkhart Brass ¾-inch cone spray ground sweep nozzles mounted under the front bumper, and a Hannay booster reel with 150 feet of one-inch hose.

Doug Kelley, product manager for KME, says that to give the multipurpose unit greater mobility in muddy terrain, KME converted the Ford’s dual rear wheels to a super singles conversion. “We put a lift kit on the truck that raised the chassis six inches,” Kelley says, “and had to modify certain features in the chassis wheel well and front fender flares so the tires wouldn’t scrub when turning. We installed Continental military-grade 40-inch tires that are more aggressive, knobby, and beefy.”

Kelley adds that the advantages in converting a brush truck to super singles include better ground clearance, allowing the vehicle to go over larger obstacles; the much more aggressive tread to the tires, which gives the truck a better grip; and the ability to operate in muddy or soft soil, where dual rear tires will get stuck because of mud sucked in between them.

Baird points out that the department has had the KME quick-attack truck “off road numerous times on calls, and the lift kit and super singles have worked out really well. We haven’t been stuck yet.”

KME also built a transverse compartment in the vehicle behind the cab for a Stokes basket and backboards, Kelley notes. “That fits in with the department’s need to use the quick-attack truck as a general response vehicle for small fires and car wrecks besides brush fires,” he says. “Also, they wanted it to serve as a backup medic unit to their ambulances.”

The vehicle’s front bumper is also out of the ordinary. “We spec’d a Buck Stop heavy duty steel bumper and brush guard,” Baird says, “which we had KME finish with Line-X. In fact, we finished all of the compartments with Line-X too.”

Regarding the department’s use of foam on the quick-attack truck, as well as on three of its pumpers and pumper-tankers, Baird says it was to improve the department’s Insurance Services Office (ISO) rating. “The reason we’re carrying foam is to get our ISO rating lower,” he notes. “We’ve been able to lower our rating from a 9 to a 5 because of the foam, which we only use when we need to, like last year when a homeowner poured gasoline around in his house and lit it. We used 40 gallons of foam on that fire because we were told he was still in the house, but it turned out he wasn’t.”

Service area: Provides fire protection, rescue, and EMS services to 32 square miles of Green Township, Ohio, with a population of 4,000. Coverage area is primarily residential and farmland, a mix of flat and hilly geography that includes woodlands and farm ground requiring off-road access.