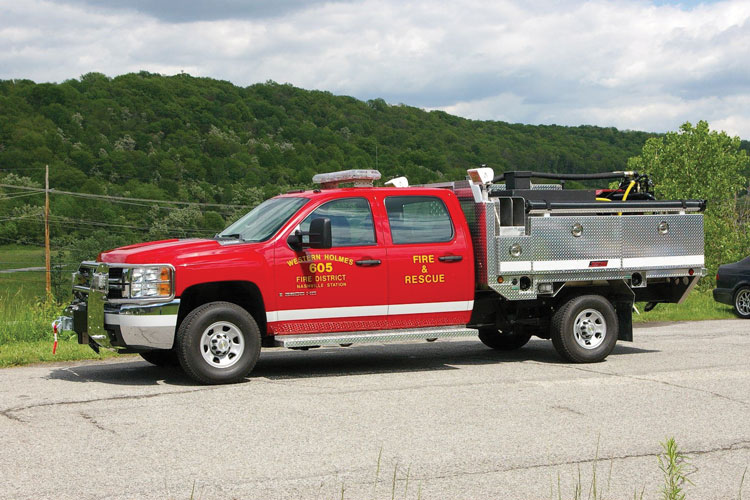 Typically, these vehicles have short wheelbases; have gross vehicle weight ratings (GVWR) under 20,000 pounds; carry a modest-sized pump, around 300 gallons of water, and perhaps some foam; and are charged with fire knockdown duties and sometimes even rescue operations.

Joe Messmer, president of Summit Fire Apparatus, says that departments coming to Summit say they want smaller pumpers with the ability to get into and out of areas where larger vehicles might have trouble. “They want vehicles that are able to get in quicker, and their firefighters often don’t want to drive large trucks,” Messmer says. “They tell us they want a vehicle that’s more agile and able to get around better in tighter areas.”

As a slight step up from the typical mini pumper, Messmer says Summit built a “midi pumper” for the Clinton Warren (OH) Fire Department on a GM 5500 four-door chassis with an emergency medical services (EMS) compartment in the crew cab. The rig has a Hale 1,000-gpm midship pump, a 300-gallon UPF Poly water tank, a Hale 2.1A FoamLogix foam system, all Akron Brass valves, and a 10-kW SmartPower generator.

“Fire departments are trying to pack as much as they can on one truck,” Jensen observes. “They often want rescue tools on a mini pumper so they can use it for motor vehicle accidents, as well as in fire suppression activities. If they go to a structure fire, most departments use the vehicle for getting a line out to protect neighboring structures but not for going into the building that’s burning because they don’t carry enough water.”

Grady North, product manager for E-ONE, notes that many fire departments would like to take a full-size pumper and shrink it into a mini pumper that’s faster and multipurpose, but often they try to do too much with the rig because most smaller chassis have a limitation of a 19,500-pound GVWR. “We do a lot of the extended cab versions where the department can store medical supplies in the cab,” North says. “We get some four-door cab requests, but they become pretty cramped when the firefighters are in there wearing turnout gear.”

Jason Darley, North American accounts manager for W.S. Darley & Co., says Darley uses PolyBilt® bodies “to provide weight savings over other types of material, which helps with the amount of water the mini pumper can carry.” Darley notes that the Ford F-550 chassis is limited to a maximum of a 1,500-gpm pump because of the horsepower rating of the chassis engine and that a typical water tank on a Darley mini is a 300-gallon model with a 25-gallon integral foam tank. “If you put a compressed air foam system (CAFS) on the vehicle, it makes the water go further, making a rig that can’t carry a lot of water that much more effective.”

North points out that most of the pumps that E-ONE has put on mini pumpers are 1,000- to 1,500-gpm units. “They are heavy and take up quite a bit of space,” he says, but the department gets Insurance Service Offices points for pumping capacity.”

Mike DuFrane, vice president of sales for the Midwest region at Pierce Manufacturing, says that by using voice of customer groups, Pierce determined that storage capacity and bigger pumps were the two most important elements fire departments wanted on mini pumpers. “We make an initial attack mini, a light rescue mini, and a utility mini pumper,” DuFrane says. “It’s a single-body architecture where we redesigned the body and mounting style to eliminate the pump house, so the pump structure is now mounted in the body. That means the over-the-wheels compartments are larger and in a more central area of the truck, while there are smaller compartments in front of the wheels for self-contained breathing apparatus (SCBA) and SCBA bottles.”

Ryan Slane, product manager of pumpers and tankers for KME, says the typical mini pumper that KME offers has either a PTO or split-shaft pump ranging from 250 to 1,500 gpm and carrying 250 to 300 gallons of water, depending on the hose load, compartmentation, and equipment. “Because the total weight of the vehicle is driven by the chassis weight capacity, we might have to adjust the water tank capacity, depending on how much equipment the department wants to carry,” Slane observes.

“For pumps, we’ll put on 250- to 750-gpm PTO units or split-shaft pumps up to 1,500 gpm,” Slane says. “For the larger split-shafts we would use the Waterous CX series, the Darley PS series, or the Hale DSD series – all of which are pedestal mounted pumps – and we would build the manifolds for them.”

Wade Kirvida, sales engineer for CustomFIRE, says his company prefers to make mini pumpers with rear-mount pumps. “We are able to set up the drivelines better with a rear-mount pump,” Kirvida says, “and it also gives us more control with weight distribution, allowing for a very clean design.”

Tyler Meekins, sales assistant at 4 Guys Fire Trucks, believes that fast-attack pumpers are getting more popular because the cost of custom pumpers continues to get higher. “A lot of departments use a mini pumper like a full-size pumper,” Meekins says. “Some minis we make have 1,250-gpm pumps on them and 300 gallons of water, and you don’t need a commercial driver’s license to drive it.”

Meekins says 4 Guys recently built a mini pumper for the Gorman (MD) Fire Department on a Ford F-550 chassis with a Hale 1,000-gpm pump, a 290-gallon water tank, a 10-gallon foam tank, and a FoamPro 1600 foam system. 4 Guys also built a quick-attack pumper for the Whitney Hostetter (PA) Volunteer Fire Department on a Ford F-550 four-door chassis with a CET PFP-19-hp pump, a 250-gallon water tank, roll-up doors, and FRC Spectra LED scene lights on each side of the body.

Todd Nix, apparatus consultant for Unruh Fire, says Unruh put a hydraulically driven pump on a mini pumper that it sold to the West Des Moines (IA) Fire Department. “It’s a Hale AP-25 250-gpm pump, hydraulically driven so it can do pump and roll,” Nix says. “The rig is on a Ford F-550 chassis and carries 300 gallons of water with an integrated 20-gallon foam tank. The department is using it for EMS response, vehicle fires, brush fires, and dumpsters.”

Nix also serves as a lieutenant at the Sedgwick County (KS) Fire Department, which purchased a mini pumper from Unruh Fire. “We had a fully involved garage fire that had living quarters above,” Nix says. “Our mini has 300 gallons of water and a Hale HBX-200 B18 200-gpm pump and foam. As a quick-response vehicle, we got there quicker than our Type 1 pumper. We had the fire knocked down when the first engine pulled up to the scene. I wouldn’t hesitate to use a quick-attack pumper with foam to darken down a structure fire.”

Ken Lenz, vice president of engineering for HME Inc., says fire departments want the solution of a smaller truck so they don’t have to run their full-size pumpers around, but they don’t want to give up the capabilities of the larger rig. “With the smaller pumpers, we can give them 1,500 gpm in a midship configuration with 400 gallons of water,” Lenz says. “If they are heavy with extrication equipment, we’ll give them a 300-gallon water tank, but if it’s a wildland firefighting vehicle, we’ll give them 500 gallons of water.”

Lenz points out that HME also makes mini pumpers with CAFS. “It’s a hydraulically driven compressor up to 100 cubic feet per minute (cfm), where it’s a balance pressure system, allowing the operator to flip a single switch to turn the compressor on and then use foam,” he says. “It’s an option that fire departments select quite often.”

Trapper Meadors, sales engineer for Precision Fire Apparatus, says, “A lot of fire departments use mini pumpers to run to nuisance calls, fire alarms, and even as rapid intervention team vehicles. Very often these vehicles have rear-mount pumps, although we do see some midship pumps.” Meadors notes that Precision is most comfortable putting a 300-gallon water tank on a mini pumper chassis, “because you have to scrutinize the department’s weight load and the equipment it wants to carry to not go over the GVWR.”

Often a department will opt for a Super Single conversion, Meadors says, in which case Precision ships the chassis to a maker in Texas, which removes the stock Ford axles and installs new Dana 80 series axles, wheels, tires, and brakes.

Kirvida says CustomFIRE recently built a mini pumper for a customer in northern Wisconsin on a Ford F-550 4×4 chassis with a 1,250-gpm Waterous pump and a 300-gallon water tank “because they wanted to be able to take the truck offroad where they couldn’t get a full-size pumper. For other departments, the mini enhances the fleet by taking the less critical calls so their first-out pumpers don’t have to run to everything.”

About the future for quick-attack and mini pumpers, Messmer observes, “There will always be a desire for these smaller pumpers, and the resurgence in interest we’ve seen recently is proof of their continued popularity.”