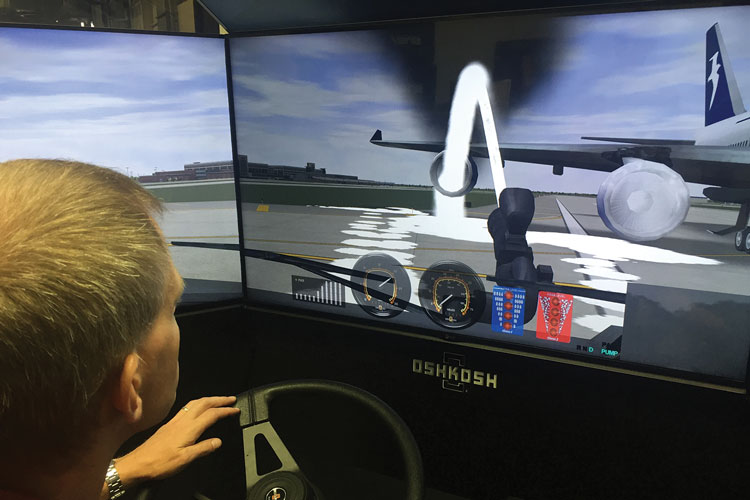 The company’s Ascendant aerial has proven to be the most popular aerial product it has ever produced, and it has been working hard to keep up with the demand for its Enforcer chassis, introduced at FDIC International 2014. I recently made the trip out to Appleton, Wisconsin, to catch up with what the company has been up to. This wasn’t any ordinary visit though. The folks at Pierce had a pretty packed agenda for me while I was there, including a trip to the Pierce Industrial Park Plant (IPP) facility to demo the Striker simulation system, tour the plant, and get a ride on a Striker-not something I had ever done before-and to go to the Oshkosh proving ground for a ride in some of the company’s military vehicles. Although you might wonder what military vehicles have to do with anything, read on.

My day began at the IPP facility. Before I toured the facility, Sam Lowe, marketing representative for Oshkosh Airport Products, walked me through the Striker Simulator. I had seen the simulator at Interschutz 2015 in Germany but hadn’t had an opportunity to go through a simulation. Actual Striker aircraft rescue and firefighting (ARFF) apparatus operators I’m sure would do much better than me on these simulations. I managed to put out an engine fire and a cabin fire with a Striker. Having operated fire apparatus for many years of different sizes, I figured, how difficult could this be? But, operating a Snozzle and piercing nozzle from inside the cab of a Striker is a lot different than hopping out and going to a pump panel and engineer’s compartment to operate everything. So, not only did I do a little simulated driving and firefighting, I also learned a little more about the steps it takes to generate foam on these rigs.

When you sit in front of the simulation screens, you’re basically sitting in a Striker cab. All the controls for generating foam and operating the boom are to your right, and there are a number of steps to go through to produce foam. Aiming the front bumper turret so the foam mixture actually hits your target takes some getting used to as well. Bottom line: I walked away with newfound respect for ARFF truck operators.

After the simulator, I met with Jason Shivley, director of engineering at Oshkosh Airport Products, who filled me in on some of the upcoming Striker products. Expect to see a number of enhancements to Striker 8×8 rigs. According to Shivley, the big changes are to the body and the driveline. The updates are almost a relaunch, as there haven’t been major changes since 2001. Currently, Striker 8x8s feature a 950-horsepower (hp) Caterpillar engine. Upcoming, however, will be units featuring two engines side by side (dual Scania D16 engines delivering 550 to 750 hp each) and dual Allison 4800 EVS transmissions. The firefighting systems will include a roof turret, a bumper turret, 4,500 gallons of water, 630 gallons of foam, and a 1,950-gpm pump at 240 psi. It will also feature an around-the-pump foam proportioning system.

From Shivley, it was time to meet up with Bill Proft, Pierce rescue program director, for a tour of the IPP plant floor.

Pierce’s IPP facility is mostly responsible for heavy fabrication. Custom cab fabrication and assembly occur here, as well as painting repeatable parts. Some finish work painting is also done here, such as for heavy rescue bodies and pump houses. Bodies for fire apparatus are also fabricated at the IPP facility, as well as pump modules. Although ARFF unit assembly was still being performed at IPP at the time of my visit, Pierce is preparing to move ARFF assembly to another facility.

The IPP plant is also where Pierce assembles its Encore product. Pierce Encore rescue bodies are modular bodies bolted together in lengths from 11 to 23 feet in stainless steel or aluminum.

At the end of my tour at the IPP plant, I got to take a ride in a Striker vehicle. Although I didn’t get to drive it or operate it, I had a front row seat watching an operator do for real what had been simulated for me only an hour or so before.

It might sound a bit daunting sitting down with a group so large, but what resulted was a real down-to-earth conversation about Pierce and about the fire industry in general. As McLeish said, the purpose of the Platform Team is to tie everything together: engineering, product development, and sales.

The conversation began on the subject of Pierce’s challenges as a manufacturer. Trinkner remarked that keeping specifications compliant with National Fire Protection Association (NFPA) 1901, Standard for Automotive Fire Apparatus, was a challenge, as well as ensuring that the company provides what the customer wants. This parlayed nicely into a needs vs. wants conversation, with Proft remarking, “If there’s stuff you don’t need, take it out,” adding that customers need to spec what they need and only what they need. The group’s advice to fire departments is to put together a clear and concise spec and follow it.

From challenges to Pierce, the discussion turned toward its fire service customers and their challenges as Pierce sees them. McLeish commented that funding remains one of the biggest challenges for the fire service. There are departments that are in a good position to buy right now, but they have to catch their fleets up, which means they have to be creative with the funds. And, McLeish adds that this problem is not a city problem. The suburbs are in the same boat, and the departments that are generally experiencing this issue, according to McLeish, are in the medium to large customer space.

Naturally the conversation eventually turned to Pierce and its recent successes. Its Enforcer chassis product has been performing very well, and its Ascendant aerial product continues to be very popular, particularly in its Quint configuration.

But, really Pierce’s greatest successes are its people. Moore said, “People make Pierce. They are our secret weapon.” According to Moore, Pierce’s tenured workforce generally has been with the company for an average of 23 years-with employees in the shop having been around even longer. Additionally, McLeish adds that the pool for skilled labor is strong because of the company’s location in Wisconsin, which has a history of manufacturing. Moore comments that when new people come into the organization, they go to “Pierce University.” There is also a mentoring program where recent retirees return to bring the new employees along.

One item Moore also brought up during the Platform Team meeting is Pierce’s current backlog. It’s enough of a backlog that the company has had to expand to space across the street from its facility to use as a “Blue Floor Annex” of sorts. Pierce had arranged for me to take a look at a tiller truck for the City of Pooler (GA) Fire Department. The department’s truck committee was there for final inspection of the rig. Sold by Jeff Amlong, of Ten-8 Fire Equipment, the tiller was spec’d by Pooler’s apparatus purchasing committee under the leadership of Chief Wade Simmons. (Visit http://bit.ly/2cmqPyt for our coverage of this rig.)

During the Platform Team meeting, McLeish said that one of Pierce’s strengths is its parent company, Oshkosh Corporation. Pierce became a subsidiary of Oshkosh Corporation in 1996. Since that time, a number of Oshkosh innovations have found their way into Pierce products. Many of these innovations have started out on the military side of Oshkosh’s business. One example is the TAK-4 independent suspension, and another is Oshkosh’s E-Coat.

Because so many of Oshkosh’s products are for the military, taking photographs was not an option during my tour. However, I was able to get a look at the entire E-Coat process.

So, what is E-Coat? It is a product that provides corrosion and chemical resistance that also provides a surface for paint of any color or finish. It was originally designed for military products. Although “coat” is in the name of the product, it’s not the type of coating you’d normally think of. When going through the E-Coat process, entire frame rails are dipped into 16 tanks as they go through a four-part process that includes prepping the metal, coating the metal, rinsing the metal, and curing the metal. Tanks one through four clean the metal. Five through seven perform an acid cleaning. In tanks eight through 10, the metal receives a zinc phosphate coating, which will stop corrosion from going under the paint. Tanks 11 to 13 are where the metal is pretreated, sealed, and rinsed. Tanks 14 through 16 are the electrodisposition process. After going through all 16 tanks, the metal is cured. Once fully cured, frame rails with E-Coat are chemically resistant to oils, fuels, and many acids. Any substrate can go through the E-Coat process.

The tanks that are part of the E-Coat process are up to 36 feet long, eight feet deep, and 3½ feet wide, so entire frame rails for Pierce’s variety of chassis can be submerged in one piece.

My final stop was the Oshkosh proving ground. Again, I couldn’t take any photos here, but the company did provide me with some for this article. The proving ground was very busy when I was there, because Oshkosh recently secured a government contract for military vehicles to replace the Humvee. I did not have an opportunity to demo one of the new vehicles, but I did get to take a ride in an M-ATV, which is a vehicle used by the Army, Marines, and Navy, and an LVSR, used by the Marines.

Both vehicles were equipped with TAK-4 suspension, and it’s hard to get a real understanding for how TAK-4 behaves until you get a ride on the proving ground; you are in a 10-wheel LVSR; and you go up and over a hill that is on a 60-degree grade where the driver stops so the rear six wheels are up in the air, the cab is pointed down, and all the weight of the vehicle is on the second set of wheels. You also come away with a whole new respect for the men and women in our armed forces and the vehicles that protect them as they go into harm’s way.

Pierce really rolled out the red carpet for me and put me through my paces during what was a packed day and a half at the facility. It had been a while since I visited, and there was definitely a lot to see. This issue of the magazine also contains an article covering what to expect from 2017 and the health of the industry. It talks a lot about mergers and acquisitions, which we have seen a lot of in 2016. A major takeaway from the trip was not only that the fire industry continues to rebound after 2008, but also that mergers and acquisitions, though they sometimes get a bad rap, often work to enhance a company’s product offerings, which then benefits the entire market. There will continue to be bumps in the road, but the fire industry continues to rebound, and industry suppliers continue to invest in their operations to continue pushing the limits of product innovation.

CHRIS Mc LOONE, senior editor of Fire Apparatus & Emergency Equipment, is a 23-year veteran of the fire service and an assistant chief with Weldon Fire Company (Glenside, PA). He has served on past apparatus and equipment purchasing committees. He has also held engineering officer positions, where he was responsible for apparatus maintenance and inspection. He has been a writer and editor for more than 20 years.