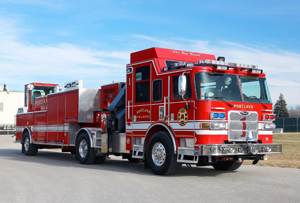 APPLETONWI – Pierce Manufacturing, an Oshkosh Corporation (NYSE:OSK) company, delivered a heavy-duty rescue vehicle unlike any fire apparatus in company’s history. Built for the Portland (OR) Fire & Rescue (PF&R) Department, the apparatus is built on a tiller configuration, except that the rig features a heavy-duty boom—instead of an aerial ladder —mounted directly behind the cab. The heavy-duty boom is manufactured by Iowa Mold Tooling (IMT), an Oshkosh Corporation Company. In addition, PF&R has ordered a Pierce 100-foot medium-duty tiller vehicle.

“With multiple earthquake faults in the region, the new Pierce heavy-duty rescue tiller boom was built to support urban search and rescue operations, including a large scale emergency,” said Tony Snook, firefighter at the PF&R and 21-year veteran of Heavy Rescue Squad 1, who led the department’s development of the vehicle. “The new apparatus carries an IMT heavy-duty rescue boom mounted directly behind the cab on the tractor, and the trailer becomes, in effect, a huge heavy rescue body. We’re a specialized heavy rescue team built for just that – tough rescue challenges.”

When placed into service, the heavy-duty rescue tiller with aerial boom will respond to a wide range of emergencies throughout the tight and congested areas of Portland, including trench rescues, confined space rescues, tunnel collapses, and more. The vehicle is built on a Pierce Arrow XT™ chassis with a 16-inch raised roof cab and seating for six firefighters. The vehicle, with a GVWR of 74,300 pounds, features Pierce’s TAK-4® independent suspension on both the front axle and the rear tiller trailer. The IMT articulated boom is built by Pierce sister company, IMT. The body features 15 compartments with a wide array of slide-out and tilting trays, shelves, and toolboards for rescue equipment, compressors and hydraulic hoses.

The second apparatus is a 100-foot medium duty aerial tiller built on the Arrow XT chassis. It features a raised roof cab, seating for six firefighters, watertight sealed compartments, an array of slide-out trays and toolboards, LED floodlights and spotlights, both backboard and stokes basket storage, 11 ground ladders ranging from 12 to 45 feet long, and a 100-foot medium-duty aerial ladder.

Is This How You Treat Your Chainsaw at Home?