Pierce Manufacturing Inc. turns 100 this year. The business that began as Auto Body Works in Appleton, Wisconsin, in 1913 by Humphrey and Dudley Pierce has grown into the largest fire apparatus manufacturer in North America.

When Jim Johnson was appointed president of Pierce in July 2010, he was very impressed with the work ethic that he found throughout the Pierce organization. He found a total commitment to listen to the needs of the customers and the fire apparatus industry and design, test, manufacture, and service products to provide the product and the performance the customer and the industry expects.

Many Firsts in 100 Years

In 100 years, there have been many changes in the type of products Pierce offers. There has also been a long series of “firsts” during its time in the fire apparatus manufacturing industry.

Johnson shares that although Pierce continues to be the leader in market share of North American fire apparatus deliveries, the current United States economy and the trickle-down effect on municipalities’ spending has had a significant impact on the fire apparatus manufacturing industry. Although domestic deliveries may be down as much as 30 percent, recent increased sales activity and orders from the Asian market have allowed Pierce to retain its workforce. This workforce totals nearly 2,000 people and works with a dealer network of more than 300 dedicated sales representatives in North America. Pierce products are supported around the globe. Every product is backed by 24-hour service and parts support. Johnson is optimistic that North American sales will move forward in 2013 and beyond.

The name Doug Ogilvie is mentioned in the list of “firsts” (see sidebar) in this feature. To many in the fire apparatus manufacturing industry, Ogilvie is “Mr. Pierce.” During his 41 years with the company, he established a culture of listening, caring, quality, and customer service that set the gold standard for the fire apparatus manufacturing industry. He led by example, believing that every employee should be fully engaged in his position in the company and that each had a significant role to play in Pierce’s success. He was a regular visitor at the coffee shops and restaurants near the Appleton, Wisconsin, plant, where dealers and customers would be on hand during inspection visits to the plant.

Now in his 90s, Ogilvie returns to Pierce from time to time and is warmly received by all. Ogilvie says that along with the work ethic that was so important in the building of Pierce as a leader in the industry, timing, market changes, the opportunity to partner in the Snorkel program, and the availability of a fire pump were very important pieces that allowed Pierce to become a major supplier to the industry.

Humphrey and Dudley Pierce started the company in 1913 as a truck and auto repair shop. In 1917, they incorporated the company as Auto Body Works and moved to a plant on Story Street in Appleton, Wisconsin. Building utility truck and delivery bodies was a main thrust of the business into the 1940s. The company constructed its first fire truck bodies in 1939. By 1957, the company was building fire bodies for W.S. Darley, an arrangement that would continue into the 1970s.

Ogilvie joined Auto Body Works in 1948 as a sales engineer, having completed his studies in engineering at the University of Wisconsin. He was named vice president and general manager of the company in 1958, the same year the company built a body unit with storage compartments on a chassis with a Pitman Snorkel articulating boom and platform with an attached fire hose.

Although this unit was to be demonstrated to Chicago area electric companies for use in washing power line insulators, Robert Quinn, commissioner of the Chicago (IL) Fire Department, attended a demonstration and recognized the value such a piece of equipment would have for the fire service. The next year, Art Moore, of Pitman Snorkel, had Auto Body Works design and manufacture the body for a unit that would be featured at the International Association of Fire Chiefs in Grand Rapids, Michigan. This was the start of a long and successful working relationship between Pitman Snorkel and Pierce.

Ogilvie was elected president of the company in 1960, and the company’s name changed to Pierce Auto Body Works. Sales grew to more than $1 million in 1961. In 1962, Pierce was able to obtain the rights to purchase and use the Waterous fire pump. The high acceptance of Pierce bodies on Snorkel apparatus led to many requests for Pierce to build a complete fire engine. Now with a pump supplier, Pierce was ready to enter the fire apparatus manufacturing industry. Pierce displayed its first fire apparatus at the International Association of Fire Chiefs in Louisville, Kentucky, in 1969. That same year, the company changed its name to Pierce Manufacturing, Inc.

Starting in 1970, increased demand for Pierce product resulted in construction of a 52,000-square-foot facility to house a new assembly plant. Pierce also entered into an agreement to purchase aerial and platform devices from LTI to add aerial units to the product line. Pierce also offered pumpers, minipumpers, tankers, rescues, and Snorkel units in its apparatus catalog.

In 1975, Saudi Arabia ordered a combination of rescue units, trailers, and Snorkels that totaled 700 units. Additional plant expansion in 1979 included offices and a refurbishment center. Sales topped $27.5 million. The Pierce Arrow all-aluminum custom cab was introduced. In 1982, Pierce began a ground-up production of the Arrow (chassis, cab, and body), becoming a single-source custom fire apparatus manufacturer. Additional apparatus models followed, including the Dash custom tilt cab in 1984, the Lance custom split/tilt cab in 1985, the Saber in 1992, and the Quantum in 1995.

Ogilvie became CEO in 1986. At that time, Pierce had more than 850 employees operating out of three facilities. A change in ownership occurred in 1987 when Ogilvie and others sold their stock in the company. Ogilvie felt that it was time to step away from day-to-day operations. Pierce would see one more change in ownership when Oshkosh Truck bought the company in 1996.

The transformation and growth of the company during the 41 years that Ogilvie was involved in the company are a major part of the Pierce story. A few years ago, Ogilvie shared a few thoughts on his years at Pierce. The ability to work as a team with people with common goals was the key to success, according to Ogilvie. Working together, respect for the customer, and service to the customer were the building blocks to build Pierce. “Every day was an opportunity,” Ogilvie said. While Pierce was becoming a major manufacturer of fire apparatus, there were plenty of established competitors, many with their own custom product lines. Ogilvie explained, “While some competitive apparatus was custom built, there were a limited number of options offered. We at Pierce listened to the needs of the customer. Engineers did their best to find a solution that could be designed and manufactured to meet the need. We were a true manufacturer of custom fire apparatus.”

The 1996 purchase of Pierce by the Oshkosh Truck Corporation (now Oshkosh Corporation) would prove to be a very good and lasting fit. That year also marked the introduction of the Command Zone fully integrated multiplexing throughout the entire apparatus. The Husky foam proportioning system, able to simultaneously discharge multiple foam viscosities for Class A and B fires, was also introduced.

Pierce launched the Contender series of commercial and custom apparatus in 1999. This was a separate line with features and benefits never before available at their price but still backed by Pierce quality. Pierce joined with Kenworth to introduce the T300 chassis for use with the Contender line.

Starting in 2000, the Contender Line was built in a then newly acquired facility in Bradenton, Florida. Pierce also introduced the Enforcer custom chassis and a midmount aerial platform at the Appleton, Wisconsin, facility. That year it also built its 10,000th custom fire truck.

The company introduced TAK-4 independent front suspension in 2001. The system improves braking performance, ride quality, and overall durability. It remains one of the most requested options on custom apparatus Pierce builds today.

Pierce introduced the Husky 10 foam system in 2002, allowing firefighters to run Class A or B foam at up to 10 gallons per minute (gpm) using the rig’s water tank, a high-pressure hydrant, or drafting from another source. The Hawk Extreme wildland fire engine, built on an Oshkosh Truck chassis, provided all-terrain movement with firefighting ability.

The past decade has continued to bring more firsts. The Arrow XT cus- tom chassis came along in 2003. This apparatus meets the needs of high-run fire departments. In 2006, Pierce was named Wisconsin Manufacturer of the Year and the Pierce Velocity chassis was introduced, which included many features requested by firefighters. The Pierce Ultimate Configuration (PUC) was introduced in 2007. This apparatus removed the bulky pump house without compromising firefighting capabilities, making room for more storage and making the units easier to service. The PUC line expanded in 2008 to include a top-mount pumper, a 75-foot aluminum aerial ladder, and a Contender PUC pumper. In 2009, Pierce introduced a 100-foot aluminum aerial platform. The Responder stock vehicle program was launched to offer a comprehensive line of firefighting vehicles available for quick delivery with a limited selection of options.

When asked about Pierce’s future goals, Johnson doesn’t mention units sold or market share. Rather, his goal is to continue to move Pierce forward, using the standards that brought Pierce to where it is today so that Pierce employees may well observe 125 and 150 years of quality, continuous operation.

Bobby Williams, vice president of sales and marketing, credits Pierce’s strong dealer network for the company’s success. There is an internal culture to drive forward and at the same time listen and spend time to understand the customer’s needs and be able to adjust to change. Williams also credits Pierce factory employees. “Time after time a customer will share that while at Pierce and on the plant floor, employees will proudly take the time to explain a work-related process and explain the details,” he says. Although fairly new to his position at Pierce, he is excited about the activities being planned for marking Pierce’s 100 years.

Ed King, vice president, manufacturing, stresses that Pierce is constantly evaluating all manufacturing processes to ensure that the best product is delivered to the customer. Pierce has an aggressive capital program to ensure it has the most current equipment to do the job. High-speed lasers, water jet cutting, and the latest in Miller welding equipment are just a few examples of the equipment used by Pierce.

King also points out the passion that employees have for their jobs and for the product they assemble. For example, the turnover rate for employees is very low. There are several examples of two and even three generations of one family working at Pierce. One manufacturing engineer is completing 47 years of service.

King stresses the passion the employees have for their jobs at Pierce and, in many cases, their volunteer time as firefighters at area departments or districts.

For several years, Pierce has partnered with nearby Fox Valley Technical College to provide a trained workforce that is ready to go to work at Pierce following graduation. These students can work at manufacturing facilities located at the Industrial Park Plant (IPP); American Drive plant; a refurbishment facility at Weyauwega, Wisconsin; and the aerial production facility at Kewaunee, Wisconsin. Fabrication and welding takes place at IPP. That facility also is the final assembly location for aerial, heavy-duty rescue, and Oshkosh ARFF units. All other final assembly is completed at the American Drive plant. The refurbishment plant can refurbish all makes of fire apparatus and handles a large workload. 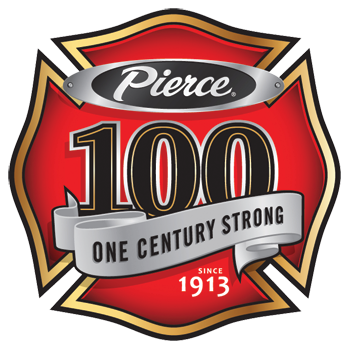 1917-Company is incorporated as Auto Body Works and moves to a plant on Story Street to meet expanding business needs. Truck and delivery bodies are built and were the main product well into the 1940 era.

1970-Construction begins on a 52,000-square-foot manufacturing and offices facility.

1996-Pierce is purchased by Oshkosh Corp.