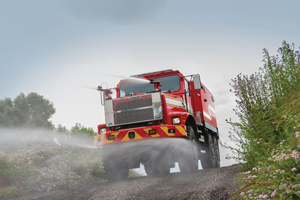 “Pierce’s 100th Anniversary celebrates the rich history of our company as we conclude our first – and begin our next – one hundred years,” says Jim Johnson, Oshkosh Corporation executive vice president and president Fire & Emergency. “Along with an excellent display of apparatus – including the Dash CF® chassis – we are showcasing a century of Pierce milestones and achievements.”

Also on display is a DD13 engine which, through a recent five-year extension to the original agreement between Pierce and Detroit, remains available exclusively on Pierce custom chassis including the Dash CF, Quantum, Velocity, and Arrow XT.

The 1976 vintage Pierce custom pumper on display is a piece of living history, with roots reaching back to America’s bicentennial year, when it was unveiled at FRI in Las Vegas. “As part of Pierce’s living history, we are proud to display a red, white and blue custom pumper from Jonesboro, Indiana originally displayed at this very show in 1976,” adds Johnson. “It’s even more amazing when you understand this truck is still on duty at its department…as is one of the firefighters who first drove it to FRI during America’s bicentennial celebration thirty seven years ago!”

Pierce is also showcasing its Support for the Long Haul initiative to benefit the NFFF. Through October 1, 2013, participants who visit www.supportforthelonghaul.com to make a $10 donation to the NFFF will automatically be entered for the chance to win the firefighter inspired, customized Ford F-150 4 x 4 SuperCrew pickup truck seen at booth #4431. The sweepstakes winner will be announced in November 2013.