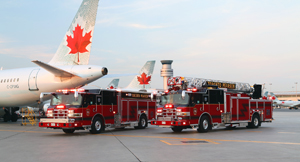 Toronto Pearson Fire & Emergency Services responds to 5,000 calls each year with an operational crew of 17, and a minimum of 11 people on duty at any time. Toronto International Airport is the largest and busiest airport in Canada. In 2011, it handled 33.4 million passengers and it is currently the world’s 23rd busiest airport.

Integration of EMS and Hospital System Is Key to Ambulance Service...