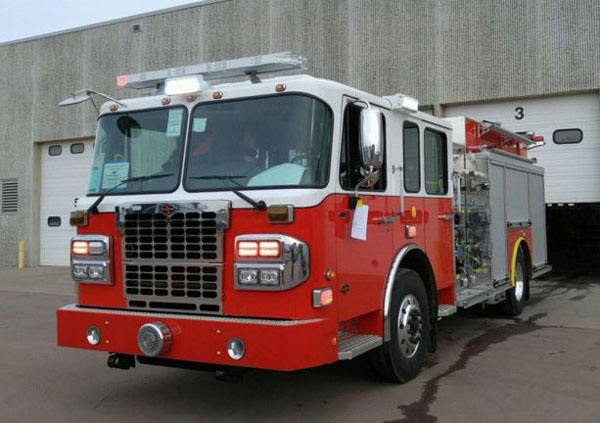 I recently had the pleasure of sitting down with Deputy Commissioner Robert Corrigan and Battalion Chief Jim Mueller, of the Philadelphia (PA) Fire Department, to talk about its new Spartan ER pumper order and recently delivered tractor-drawn aerials. The Spartan ER order brings the department back to Campbell Supply Company, a dealer the department has had a relationship with for some time, going back to when Philadelphia purchased a number of American LaFrance engines and TDAs. Philadelphia’s front-line apparatus includes rigs from various manufacturers including KME, American LaFrance, Freightliner. The Spartan ER order is part of Corrigan’s five-year plan to upgrade the Philadelphia Fire Department’s apparatus fleet so no front-line vehicle will be over 10 years old and no reserve vehicle will be over 20 years old. The first two Spartan ER rigs are in production and department representatives recently paid a visit to the factory to check on their progress. new spartan

Some features of the new pumpers are tried and true for the department, and some are new to the fire department but reflect current trends. According to Corrigan, the design of the trucks is a collaborative effort and many features are based on firefighter feedback. One example is the hosebed design on the new rigs. Based on firefighter input, the hosebeds on the new rigs will be very low—40 inches above the tailboard. Other features reflect a return to what the department knows has worked. One example is the return of a mounted deck gun on the rigs to give company officers the option of quickly leading off with a blitz or exterior attack. Mueller cites another example, which is returning to a short front bumper and no front intake. Part of the reason for this is an issue faced by many fire departments in old cities: being able to maneuver fire trucks on tight streets. The rigs will also feature lower ground ladder storage and LED backlit exterior grab rails. The pumpers will feature Waterous 1,500-gpm two stage pumps and 500-gallon tanks, a staple across the city’s pumper fleet. All handlines deploy from the rear of the truck—no crosslays—and all city rigs carry two hard sleeves.

Seating on the new pumpers accommodates six personnel, and after the first to pumpers in this order, Corrigan says the engines will feature 10-inch raised-roof cabs. Another feature of the Spartan ER rigs is a compartment for backboard storage in the pump house. Mueller states that when the new engines arrive they will be put to the test in the department’s busiest companies

From the department’s headquarters, I traveled to the quarters of Ladder 14 to see one of the new KME TDAs. The firefighters at Ladder 14 gave me a tour of the truck. The next TDAs to arrive will be slightly modified. The cabs will feature 10-inch raised roofs, and two compartments at the rear of the rigs will be removed to increase visibility for the tillerman.

I am looking forward to returning to the department when it receives the two new Spartan ERs, not only to see them when they arrive but also once they’ve been in service for a time. Corrigan’s plan to upgrade the fleet is aggressive, and goes through fiscal year 2021. In FY2017 alone, the plan is to replace four pumpers, four TDAs, 10 medic units, and the department’s heavy rescue. These are currently funded. Plans call for replacing one platform aerial, three more pumpers, and five command vehicles, but these are currently unfunded. During the past two years he has made a lot of headway in discussing the state of the fleet with city and department leadership and has communicated the exact state of the fleet. Communication with the leadership is key, but so is communicating with the rank and file, and Corrigan has been using social media to communicate with firefighters regarding plans for new apparatus, apparatus in production, and modifications to current specs. Follow Corrigan at https://twitter.com/PFDDepCommish.