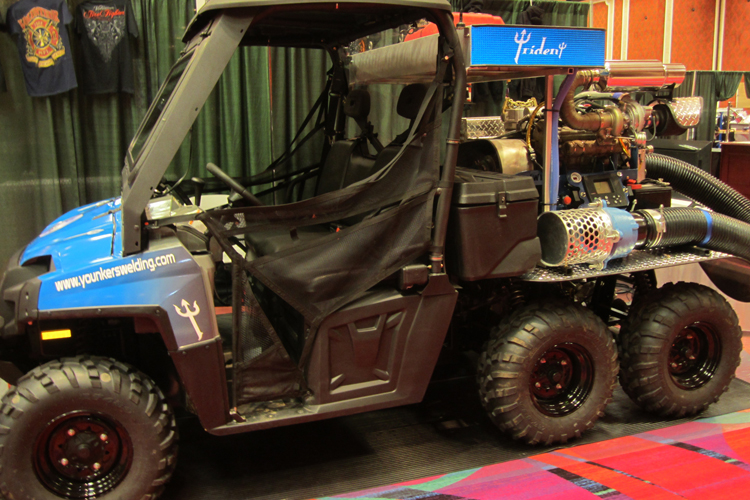 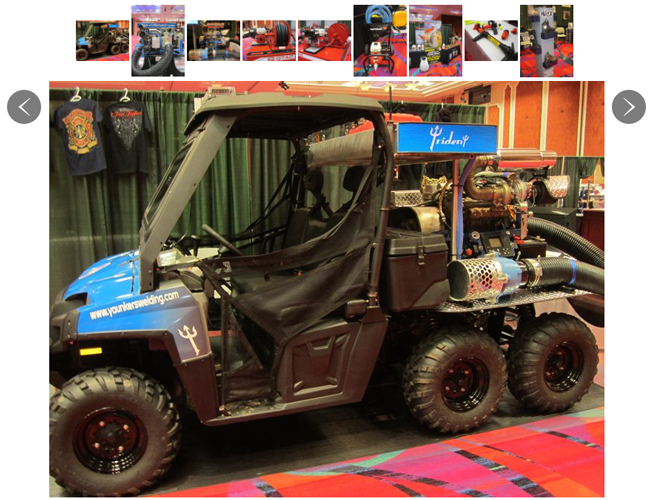 The recent Wildland Urban Interface (WUI) conference run by the International Association of Fire Chiefs (IAFC) at the Peppermill Resort in Reno, Nevada, provided an opportunity for wildland firefighters and incident commanders to handle a variety of equipment and gear used by wildland teams in suppressing fires.

Kevin Younker, owner of Younkers Welding and Trident Pumps in Alberta, Canada, exhibited the Trident Pump in Reno, a 3,000-gallon-per-minute (gpm) pump mounted on a Polaris 6×6 utility task vehicle (UTV) designed to be able to get into wildland areas inaccessible to traditional wildland pumpers. Younker says the Trident Pump can be driven into an area or dropped in by helicopter.

“We have two models, 3,000-gpm and 5,000-gpm,” Younker says, “that can be deployed in any body of water that can support a draw of 300,000 gallons an hour. This pump is designed to drive to a stream, lake, or other water source where you can drop its suction hose into the water and pump into a bladder, portable tank, or to supply lines. The Trident Pump can draft water from depths as shallow as six inches.”

Younker notes that his company had two Trident Pumps operating at the massive Fort McMurray wildfire in Alberta in 2016. “The Trident Pump can run for weeks at a time with a two-person crew, and has a built-in auto shifting transmission that allows for the movement of water great distances at extreme head,” he adds. “Multiple pumps can be linked to reach distances of 10 miles for those fires that have no water source close by.”

In addition, MTECH makes the 300S, a skid unit with a WATERAX Versax 6 105-gpm pump and 300-gallon water tank as well as the 200S, firefighting skid with a Versax 105-gpm pump and 200-gallon water tank. Black points out that MTECH also manufactures welded copolymer truck bodies. “They are lightweight, dent- and impact-resistant, and corrosion-proof,” he says. “Copolymer bodies are more durable than aluminum, are lighter than steel, and are able to withstand the rigorous demands of wildland firefighting.”

Hale Products Inc. displayed several pump offerings, including its PowerFlow model wildland pumps with maximum pressures of 220 to 375 psi, giving maximum flows of 110 to 155 gpm. Hale also makes high-flow portable pumps that give flows of 300 to 500 gpm at 100 to 165 psi maximum pressure. In addition, Hale makes the Fyr Pak, a compact backpack pump configuration that is driven by a two-cycle 8-hp engine and weighs 34 pounds, as well as the Fyr Flote, a floating pump that will pump water from as little as four inches in depth.

WATERAX displayed several of its products, including the Versax cart system, a self-priming two-stage fire pump powered by a Honda engine on a cart that can be used near a lake or private pool. It also exhibited the Mini-Striker® pump that pairs a single-stage pump end with a Honda 2.5-hp four-stroke Honda engine; and the Mark 3 series, offered in four, three, and two-stage configurations with a 185-cc engine.

Phos-Chek, a maker of fire-retardant foams and gels used in wildland firefighting, displayed several of its wildland fire retardants, as did Tyco Fire Protection Products with its Chemguard line of concentrates and foams, Consumer Fire Products Inc. with its FoamSafe products, and BlazeTamer 380 with its aerial water enhancer elastomer.