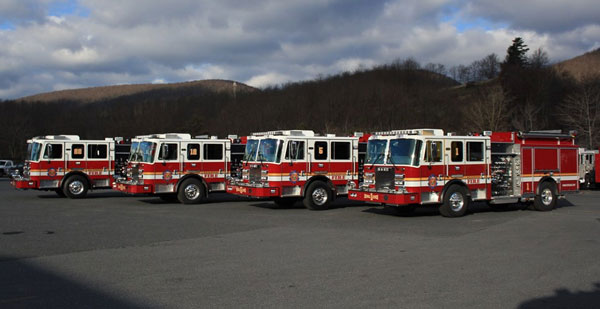 When the city of Richmond (VA) city council allocated enough funds through it’ Fleet Services Department for Richmond Fire & Emergency Services to purchase four new pumpers, the fire department got busy developing specs, looking at what other departments were doing with pumpers, and deciphering trends in the market. The end result, says a captain intricately involved in the process, was determining precisely what the department needed to allow firefighters to do their jobs well.

“With this set of specs, we decided the pumpers had to perform exactly what we needed them to do,” says Richard Lewis, Richmond’s captain. “We looked at what we needed in terms of pump flow, the overall layout of the engine, and the equipment it would carry. We built our specs around what we have to do with the apparatus, not what we would like it to do. We ended up building four safe, sturdy, functional pumpers.”

The resulting pumpers, built by KME, are all identical, Lewis points out. Each pumper is built on a KME Predator™ Severe Service 4×2 LFD chassis with a flat-roof cab and 22.5-inch front bumper extension and powered by a 400-hp Cummins ISL 9 engine, and an Allison 3000 EVS automatic transmission. Each pumper has a Waterous 1,500-gpm Waterous CSU-C20 single-stage pump, a United Plastic Fabricating (UPF) 500-gallon Poly water tank, and a manual Task Force Tips deck gun.

Lewis says the truck committee considered adding a compressed air foam system (CAFS) to each vehicle, but decided against it because a number of the department’s other apparatus already had CAFS or foam capabilities. “It was a price issue, but we also looked at the history of how we use foam in the city,” Lewis points out. “We have a foam unit, two foam tenders, and a couple of quints that already have foam capability. With the excellent water grid in the city, there is no shortage of water for us, so foam was an expense we couldn’t justify on the engines.” 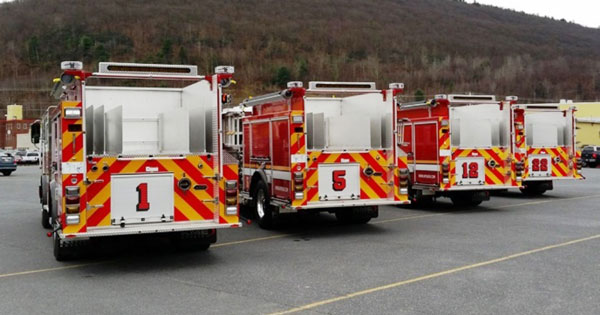 The hose bed floor on the four new KME pumpers for Richmond Fire & Emergency Services is 54 inches off the ground. Each vehicle has three discharges and a rear suction at the back. (Photo courtesy of KME.)

Richmond Fire & Emergency Services covers the city’s 62.5 square miles, with a population of 220,289, from 20 stations with 57 pieces of front line fire apparatus. “We recently switched back from a total quint concept to a truck and engine concept,” Lewis notes. “Now we run six truck companies (mostly quints) and 16 engines, along with three rescue companies that specialize in hazardous materials, high angle and technical rescue, and water rescue.”

Ryan Slane, product manager for pumpers and tankers at KME, says Richmond Fire wanted a very maneuverable vehicle that would closely match its current fleet in design. “They wanted a short wheelbase on the vehicle, not too wide, with a good turning radius, and a low hosebed configuration,” Slane points out. “We built the pumpers on our Severe Service Predator chassis with a 96-inch-wide cab, a 140-inch-long Flex body, and seating for six firefighters. The wheelbase is 189 inches, and the pump box is 59 inches wide to standardize with their fleet, although we could have designed in a more compact pump panel if they wanted it.” 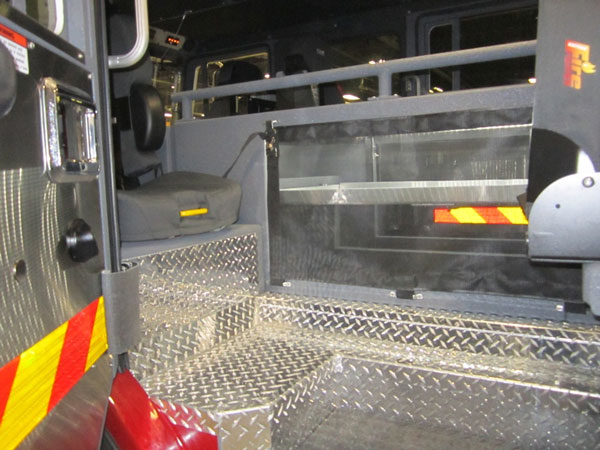 The crew cabs on the Richmond pumpers built by KME are covered with Line-X and have New York-style EMS compartments running lengthwise between the crew seats. (Photo courtesy of KME.)

The hosebed floor is 54 inches off the ground, Slane notes, and each vehicle has three discharges and a rear suction at the bottom rear of the body, as well as a handline discharge in the front bumper and another suction inlet. “There are no crosslays on the trucks,” he says. “There are preconnects off the front and back of the truck, which gives the operator the ability to either drive past the address or stop short if needed,” he adds.

Scott Zingaro of Goodman Specialty Vehicles, who sold the pumpers to Richmond, says the Task Force Tips deck gun has an 18-inch Extend-a-Gun feature and is removable so it can be mounted on a ground-base monitor stand. 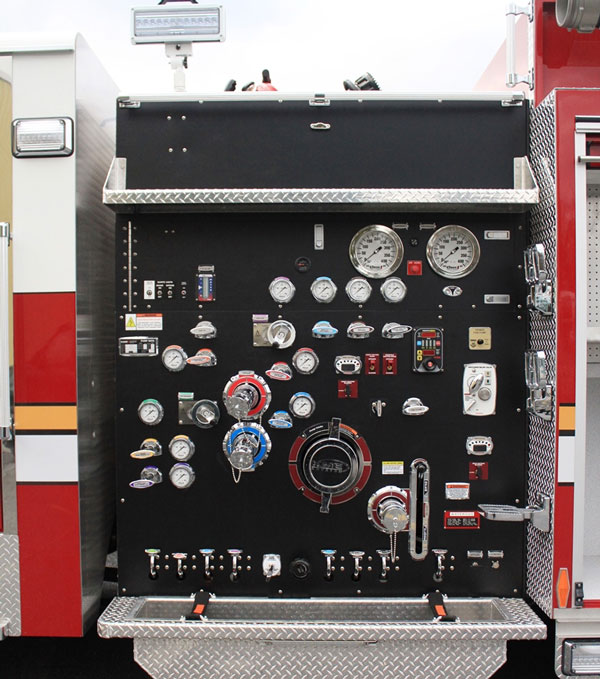 The KME pumpers built for Richmond each have a 1,500-gpm Waterous CSU-C20 single stage pump. (Photo courtesy of KME.)

“Inside the cab,” Zingaro points out, “they changed their design from vertical emergency medical services (EMS) compartments with roll-up doors to the New York style, which is where the compartment starts at the back of the doghouse and runs to the back wall. The compartments are about two feet high, accessible from both sides, and have drop-down mesh covers.”

The interior of the cabs are fully covered in Line-X, Zingaro adds, “to make the truck more durable.” Price on each of the pumpers came to $480,000.

Lewis notes that the pumpers have received a solid “thumbs up” from the firefighters using them. “We’ve had a good response with the engines since they went in service,” he says. “Engine 5 got the first one, and the first week they ran 86 calls with it. It’s all positive feedback; the firefighters enjoy the rigs.”