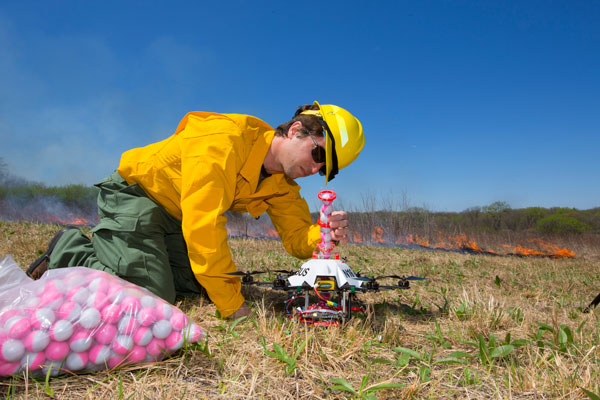 Researchers at the University of Nebraska-Lincoln (UNL) have come up with a drone that releases ping-pong-like balls filled with chemicals that ignite in order to clear brushy and grassy areas before they can be burned by wildfires. 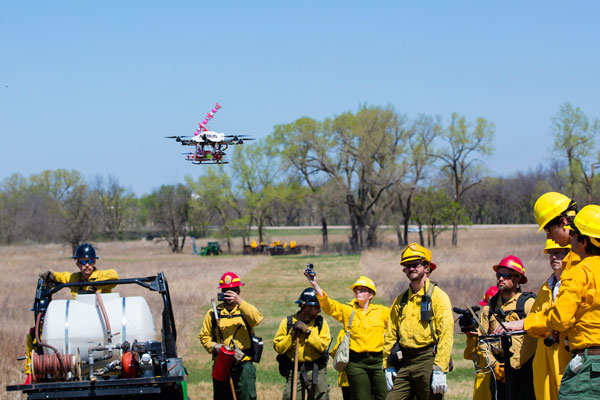 Researchers at the University of Nebraska-Lincoln fly a drone that releases plastic sphere dispenser balls to ignite brush and grassy areas to clear them in controlled burns. The testing was done on public land in Beatrice, Nebraska, in cooperation with the National Park Service, Department of the Interior, and Homestead National Monument. (Photo courtesy of the University of Nebraska-Lincoln.)

Carrick Detweiler, assistant professor at UNL, says his team recently demonstrated the functionality of the fire-starting drone on public land in April, working through the National Park Service, Department of Interior and Homestead National Monument in Beatrice, Nebraska. “We also have had interest in this technology from the U.S. Forest Service and the Department of Agriculture,” Detweiler points out. “We started this project two years ago with a design and put together a prototype, which then was tested in a lab, then went to indoor testing in larger areas, and outdoor testing on private land before the Homestead test.”

Detweiler says his team purchased an unmanned aerial vehicle (UAV) from Ascending Technologies, in Germany, and developed the fire ignition device that would be carried by the drone. “Our ignition device had to be robust enough to go on a small UAV with high level controls,” he says. “We used ping-pong-style balls that are the same that manned aircraft use to start controlled burns. These are plastic sphere dispenser (PSD) spheres filled with a chemical that, when injected into another chemical, produces a hot flame.”

A PSD is a compact aerial ignition device dispenser, typically made of aluminum and filled with a high-grade potassium permanganate powder, that when injected with glycol, causes a chemical reaction and a 20- to 40-second delayed ignition, depending on the ambient temperature. The ignition burns for approximately two minutes and allows fire to effectively take place during burn operations. 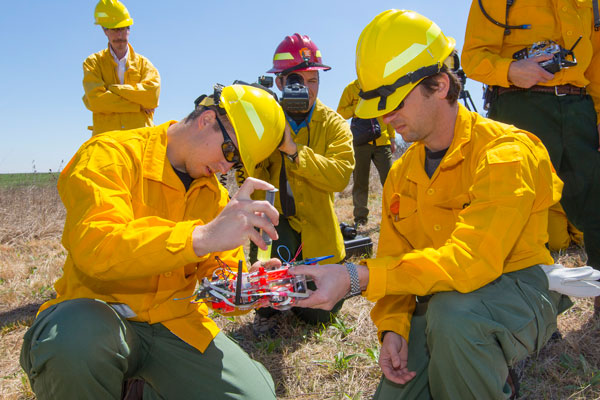 Sebastian Elbaum, professor of computer science and engineering, and a member of the team, says that the team developed a series of mechanisms to inject the glycol while the drone is flying, monitor the location of where the balls are dropped, determine if they are on the proper preprogrammed location, and also if the balls are live or not. “This is a semiautonomous process,” Elbaum notes. “We program in a sequence for the drone’s locations and drops but also have a safety pilot who can take over for the drone if necessary. We are able to operate farther than line-of-sight, but because of current Federal Aviation Administration (FAA) regulations, we work in line-of-sight, which for our demonstration was about 250 yards away.”

Elbaum says the team worked with the fire boss on site to determine where the fire boss wanted the balls dropped. “We programmed those locations into the drone,” he says. “When we’re flying, we are able to adjust the program to meet changing fire behavior, if necessary.”

Detweiler says that the drone the team uses has six rotors, is two feet in diameter, weighs four pounds including its payload, and carries between ten and 50 fire-starting balls in a hopper, depending on the configuration of the vehicle. “For our test demonstration, we carried 15 balls, but also had sensors and a camera on board to collect data on how the unit was operating,” he points out. “We have a temperature sensor on board to get a better sense of how the vehicle behaved when it flew over flames.”

Detweiler adds that during the test, the UAV was flying about 20 meters high, between 60 and 80 feet, because the researchers wanted to get a clear heat map at that altitude. “We are allowed to fly at up to 400 feet altitude by FAA regulations,” he says. “We found that there was very little effect of heat currents on our UAV during its flights.”

He notes that his team is still computing the best altitude to drop the balls for the best precision. “A lot of the drops are determined by the wind,” Detweiler observes. “We were trying to get the balls within a yard of the target, but the fire boss told us that within 100 feet is okay.”

Detweiler wants to push the autonomy of the UAV a bit more. “My dream is for firefighters to have these in their backpacks, where a robust Smartphone application can program the drone in the field,” he says. “We also want the UAV to be able to identify hot spots or areas that have been ignited that were unexpected, which will give situational awareness to firefighters on the ground.”