While the department wanted to keep the engines similar to its existing pumpers, it wanted to make some modifications to the cab that would improve the integrity of its emergency medical services (EMS) supplies.

“The department is a cross-trained agency in which all paid firefighters are required to be trained as emergency medical technicians (EMTs) or paramedics,” says Chief Scott Cassin. “All of our 26 front line engines are paramedic engines and carry medical equipment for EMS response. With the new pumpers, we decided on a longer cab, which came as a result of a firefighter’s suggestion. We were concerned about the integrity of our EMS supplies because of the warm weather we experience, so we had E-ONE incorporate an additional compartment inside the cab to store our medical supplies in an air-conditioned environment.”

Service area: The department provides fire protection, rescue, and ALS and EMS to a population of 565,000 residents in 750 square miles of Pasco County including the cities of Dade City, San Antonio, and Saint Leo.

Chris Beville, REV Fire Group’s REV Technical Center sales account manager for northern Florida, says that instead of the 58-inch cab that E-ONE put on Pasco County’s previous pumpers, the four new engines have 80-inch-long cabs that incorporate 24-inch-wide advanced life support (ALS) cabinets at the backs of the cabs, accessible from both inside and outside the rigs. “The ALS cabinet has a 110-volt air-conditioning system that keeps the medical equipment and supplies cool and has a shoreline that allows the cabinet to be cooled even when the engine is in the station,” Beville points out. 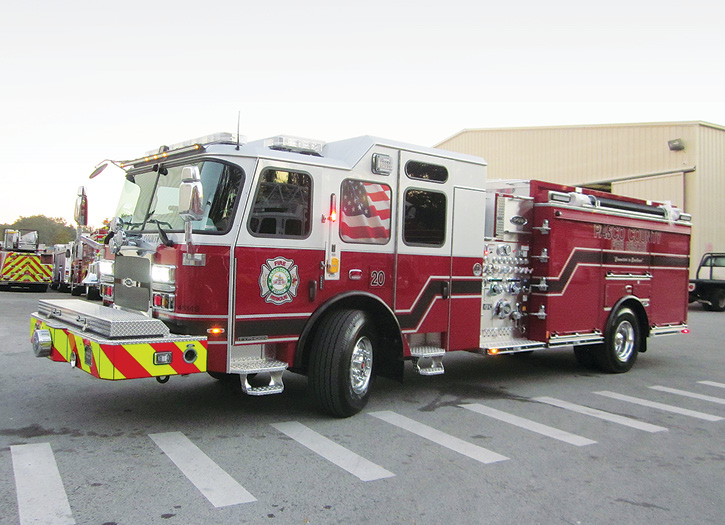 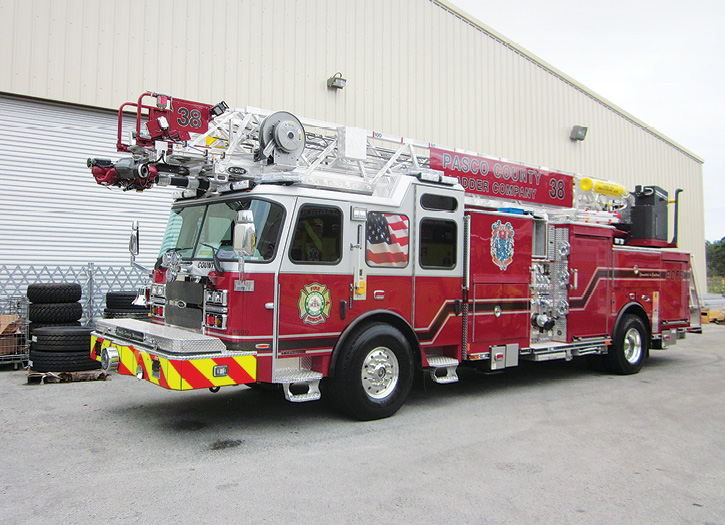 2 The HR100 aerial ladder quint has a Typhoon chassis and cab with a 12-inch raised Vista roof and seating for five firefighters and is powered by a Cummins 450-hp L9 diesel engine and an Allison 3000 EVS automatic transmission with a Jacobs engine compression brake. 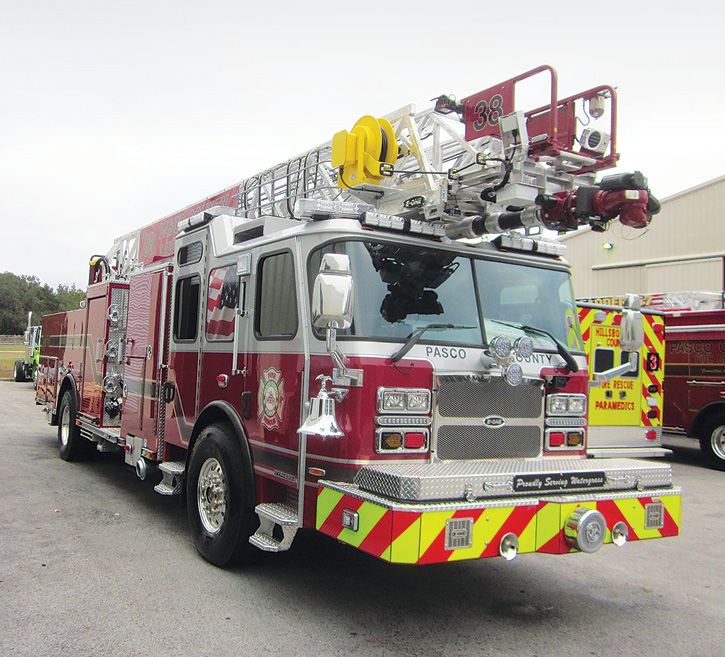 The rescue-pumpers have 28-inch extended front bumpers with full-width covered compartments, Cassin says. “All of our front line engines are rescue-pumpers, where each crew is responsible for light rescue,” he notes. “So, the extended front bumpers each have Hurst Jaws of Life eDRAULIC® tools, a spreader, a cutter, and a ram in the front compartment.”

He says the rescue-pumpers have Hale Qmax 1,750-gallon-per-minute (gpm) pumps, 750-gallon water tanks, Hale pressure relief valves, and Task Force Tips deck guns with Extend-A-Guns. They have 6-inch and 2½-inch intakes on each side, 1¾-inch hoselines in the front bumpers, two 1¾-inch crosslays and one 2½-inch crosslay above the pump houses, 2½-inch discharges in the hosebeds, and ¾-inch valved decon discharges on the right sides of the pump houses.

Beville notes that the HR100 aerial ladder quint is on a Typhoon chassis and cab with a 12-inch raised Vista roof and seating for five firefighters in 911 Seats seating, four of which are SCBA seats, with a SideStacker four-jack 100-foot rear-mount aerial ladder. The rig has a 28-inch extended front bumper with a full-width covered compartment and rides on a Dana 20,000-pound front axle and Meritor 35,00-pound single rear axle with Hendrickson Roadmaxx air ride suspension.