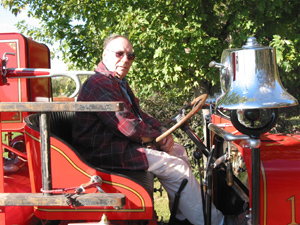 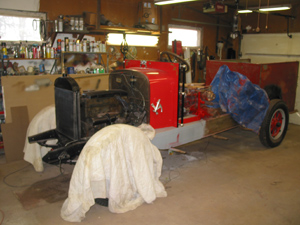 In 1927, the rural mid-central Illinois community of Washburn was ready to purchase its first piece of motorized fire apparatus. Its choice was to bring a triple combination chemical/pumper unit to town. Its search for an apparatus took it the Logansport, Indiana and the Obenchain-Boyer Company. A Reo Speed Wagon chassis was being used to build up a demonstrator apparatus. Washburn was able to have a few modifications made to the unit. In early 1928 the Boyer-Reo was delivered. The rig had a six-cylinder engine, a Hale 400-gpm pump, two 40-gallon chemical tanks, 150 feet of chemical hose, two 10-foot hard suction lengths, and a 10-inch search light.

The rig would remain with the Washburn Community (IL) Fire Department for the next 40-years, half of that time as a front-line piece of fire apparatus. By the late 1970s, space in the fire station was at a premium and the rig was declared surplus. An implement dealer in the nearby town of Henry, Illinois, Francis Reed of Reed Bros. Inc., bought the fire engine to use in local parades and to give rides to his grandchildren. For several years the rig was a regular participant in the July 4 parade. For the past decade the rig was parked away in a box car at the implement dealership.

This could have been the sad end for the Boyer-Reo, except that Bob Reed, Francis’s son, saw a 2009 feature in the Peoria Journal Star Sunday paper on a group of fire enthusiasts that were holding a muster in Tremont, Illinois. The article included a picture of a 1924 Chevrolet/Pirsch chemical rig that Heart of Illinois Fire Enthusiasts & Collectors (HOIFEC) member Dennis Deppert from East Peoria had restored. Reed gave Deppert a call, and before he knew it, Deppert had his fourth fire vehicle to restore. 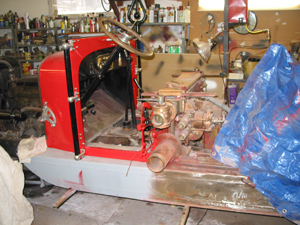 The HOIFEC is a downstate Illinois chapter of SPAAMFAA—a national organization that promotes the preservation of motorized fire apparatus. His first fire-related restoration was to make a 1931 Chevrolet two-door sedan into a fire chief’s car. That car came out as a quality restoration and caught the attention of other members of the fire club. Soon Deppert was with the club and working on his second project—a front-mount 1933 Chevy fire pumper. Both restorations then found their way to other owners in the area. That led to the Dike, Iowa 1925 Chevrolet/Pirsch chemical unit project that was displayed in Tremont.

Complex Restoration
Not many months after Bob Reed’s call, the 1927 Boyer-Reo was delivered to Dennis. Bob guaranteed the Reo would run, but it had been many years since the last trip. Restoration was very close to a complete “frame off” job. Dennis worked on the mechanicals first, with engine, brakes, and tires being addressed. Next it was on to body work, seat, and  upholstery; new running boards; locating missing accessories; rechroming and renickeling of some parts; locating a full set of wooden ladders; and painting and striping. The project took two-years and hundreds of man hours to complete. Deppert advises that you don’t even want to go where the cost in dollars comes into the picture. There were many challenges along the way. The most difficult one to solve involved a hard starting issue. Dennis found a Caterpillar Inc. machinist that built a new air intake tube for the engine to solve that problem. A trip to Braidwood, Illinois found an almost identical apparatus that had been restored by that fire department and was on display at their fire station. Pictures of the Braidwood unit aided Dennis in the final restoration appearance. 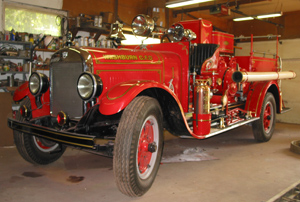 When Dennis rolled out the finished product last fall for some portrait photos, the Boyer-Reo looked spectacular. It is possible that there are more bells and whistles added than the rig ever had when it was in service, but it is a piece of fire service history that will be admired at many central Illinois parades and shows this season. July 4 for the parade in Henry, Illinois sounds like a great new beginning!

Defining Vintage
The preservation and restoration of vintage fire apparatus is becoming more and more of a lost art. For one thing there are many interpretations of what is a vintage rig. From a technical standpoint a vehicle over twenty-five years old qualifies as vintage. In the case of the Reo in this feature, that apparatus is more than eighty-five years old! Wow! When you stop to think about it, this represents some of the first motorized apparatus placed in service in many fire departments. Another factor is to find the people with the skills to do restorative work on an old truck. The mechanical skills and the paint and body skills are not easily found in our society, which tends to busy itself with computers and electronics.

The other major component is money. It takes a considerable amount of cash to be able to complete a restoration on a piece of equipment that is in even “fair”condition. Basket cases require even more infusions of cash. Hats off to people like Dennis Deppert that have an interest in vintage fire apparatus, plus bring their time, skills, and money to bring about a successful restoration. The next time you are at a fire muster and see a beautifully restored treasure, be sure to thank the owner for their dedication to the hobby and for his generous sharing of the rig with everyone. 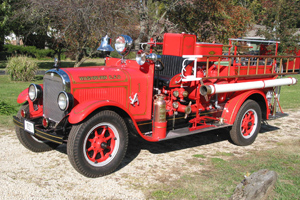 This summer the Washburn (IL) Fire Protection District will observe its 50th anniversary. Chief Jesse Erkman has kept in touch with Deppert and the HOIFEC group as he makes plans for an open house. Once the date is set, Jesse will invite Deppert to bring the Boyer-Reo back to Washburn to be on display as a big part of their celebration. Erkman thinks that there is one long-time trustee that may remember when the rig was on the roster as a reserve piece “way back when!”

What is in your fire station? Do you have a vintage piece of apparatus that could use some attention and be made parade ready for events in your community? Fire trucks are always a bit hit in a parade, and vintage rigs do bring back plenty of memories for many of your citizens. There are many levels of what makes a rig parade-ready—I’ll leave that up to you!