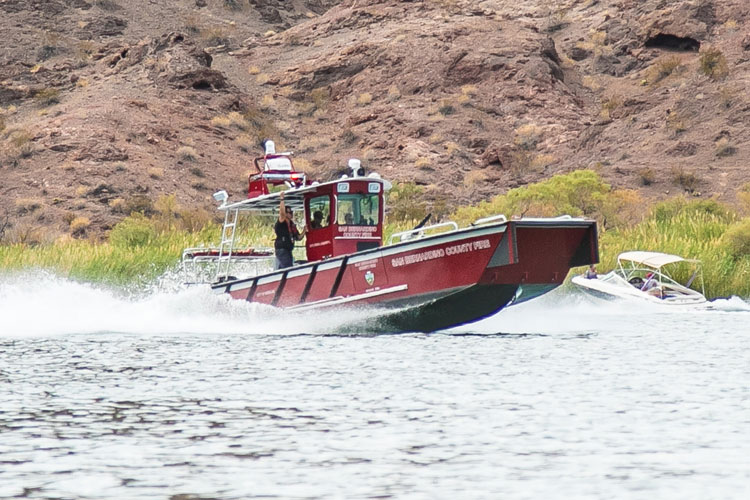 Lake Assault Boats has delivered two fire and rescue boats for service with the San Bernardino County (CA) Fire Department, both landing craft style vessels, one 28 feet long that serves on the Colorado River, and the other a 26-footer stationed at Lake Arrowhead. Both boats are equipped to handle a wide range of emergency response scenarios. 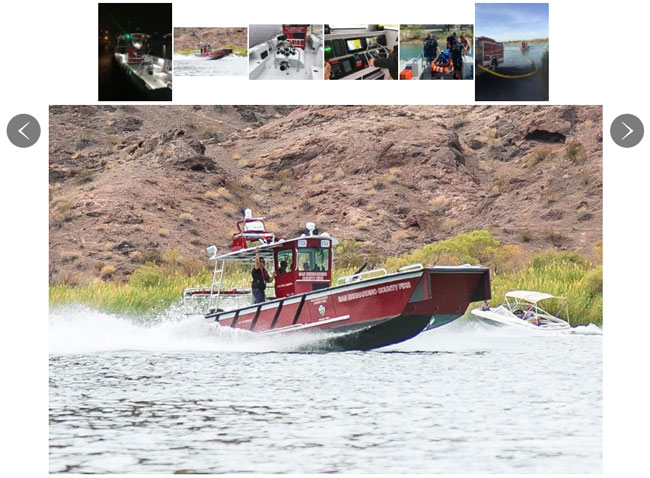 “Having two of our boats on duty with the San Bernardino County Fire Department is an honor,” said Chad DuMars, Lake Assault Boats vice president of operations. “San Bernardino County is a highly regarded department that is charged with serving a very large and diverse fire protection district, and we are proud to help enhance their on-the-water emergency response capabilities.”

The 28-foot craft is stationed in Needles, California, and serves on the Colorado River, says Brian Wells, engineer at San Bernardino County Fire Department. “This boat serves multiple purposes along a vitally important stretch of the river,” Wells says. “We can directly fight fire or support ground-based operations, and it has comprehensive dive and rescue capabilities. The boat also is designed to serve as a wildland team personnel carrier and all terrain vehicle (ATV) transport, addressing just about any emergency scenario that we encounter along the river.”

The 26-foot boat provides protection to resources along Lake Arrowhead and Big Bear lake. “This mountainous region has a history of wildfires, and one of our unique challenges is protecting the many large houses that are close to shore, but inaccessible by road,” Wells says. “We can station this boat at the backside of a house and use our deck monitor, or draft from the lake and take hoselines up to the fire scene. We also can lay hoselines to support land-based fire apparatus.”

The fireboats are each outfitted with twin 300-horsepower Mercury Verado outboard engines and include Lake Assault’s Skyhook Digital Anchor and Joystick Piloting systems. Both feature a 1,500-gallons per minute (gpm) Darley PSDE pump powered by a dedicated V8 engine, along with a Task Force Tips monitor and three discharge ports. The boats have a 63-inch hydraulically operated bow door with an integrated ladder, dual dive doors, a davit crane with twin socket locations, and a full width T-top pilothouse. The onboard electronics include dual 12-inch touch screens mounted on the dash, Garmin radar and sonar with SideVu and DownVu, chart plotting, and a forward looking infrared (FLIR) system.

Gary Smith, director of sales and marketing for Lake Assault Boats, says his company introduced joystick steering to the fire department, which had not used it in the past. “The Joystick Steering and Skyhook Digital Anchor is a system we pioneered with Mercury,” Smith points out. “The joystick is for slow speed maneuvering and docking, which can be some of the most difficult parts of boat operation. The joystick allows control shifting, throttle manipulation, and steering with one movement of the lever.

Smith continues, “When they are fighting a fire, they use the joystick to move the boat left or right, forward or aft, to aim their water stream instead of having to physically move the monitor. The Skyhook allows the boat’s operator to press a button on the binnacle control to lock in a compass heading and GPS coordinates, which then will hold the boat on that spot to plus-or-minus about five to eight feet.”

“We first learned about Lake Assault through another fire department in the Tahoe area, and a couple of our guys flew up there to check it out,” Wells says. “When we started looking into their build quality, and ability to customize to meet our department’s requirements, they floated to the top of our list. They are a first-class builder, and provided three days of on-the-water orientation before the boats were put into service.”

Wells points out that the Darley pump is able “to pull 1,500-gpm out of 18-inches of water without stirring up the bottom of the late. The water scuttle design doesn’t pull material from the bottom and send it into the pump.” He adds that the boats each have one four-inch and two 2½-inch discharge ports, which are helpful in assisting firefighting crews on land by beaching the boat and providing water supply and hand lines to wildland crews fighting fires along the Colorado River bottom.

Wells notes that because the boats are used in conjunction with San Bernardino County Fire’s dive team, the Skycrane on each boat can be set up to move something underwater if the divers need to recover a body, or in one recent incident, lift a jet ski accident victim out of the water in a Stokes basket.

San Bernardino County, at 20,160 square miles, is the largest county in the continental United States and has a population of more than 2.2 million residents. It encompasses extremely diverse environments that stretch from Los Angeles County on the west, to the Colorado River on the east, to the Nevada state line and Kern and Inyo counties to the north. San Bernardino County Fire protects more than 60 communities, including the cities of Needles, Fontana, Grand Terrace, Victorville, Hesperia, Yucca Valley, and Adelanto. The department has 81 different facilities, 1,200 employees, and hosts the California Urban Search and Rescue Team.