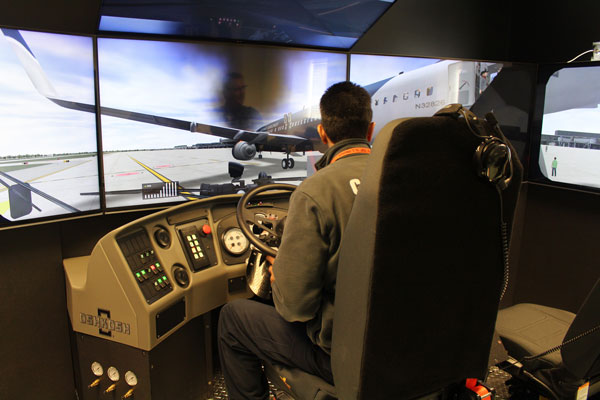 Virtual reality training is becoming more common across a wide range of applications and industries. From laparoscopic surgeons to aircraft fighter pilots, trainees everywhere are benefiting from this state-of-the-art technology. The trend has advanced to a new level of realism in the realm aircraft rescue and fire fighting with the Striker Simulator virtual reality aircraft rescue and fire fighting (ARFF) training system by Oshkosh Airport Products.

The Striker Simulator began as a stand-alone project for Chicago’s O’Hare International airport. “The O’Hare ARFF team requested that we build a simulator to enhance their driver and incident command training,” says Richard Voakes, Oshkosh Airport Products western regional and government sales manager. “We’ve also built a demo unit for our customer acceptance area as well as for trade shows.”

A “green solution” with zero environmental impact, the Striker Simulator is engineered to depict a nearly endless array of situations and scenarios. The system incorporates video footage and illustrated environments of Striker trucks in action—with views from both inside and outside of the cab and with a full audio track—for a giant leap forward in realism. Hundreds of hours of footage was created to capture the endless array of emergency response scenarios the Striker Simulator can recreate. The system depicts different environmental and weather conditions such as rain, snow, fog, night, and bright daylight. It can accurately depict the delivery of firefighting agents such as dry chemical, foam, water, and even Halon. In addition, the Striker Simulator can mimic scenarios that can’t be safely accomplished at a traditional training center, such as a fuel spill or people exiting an airplane.

The Striker Simulator offers unmatched control of each training scenario. The system includes a Scenario Toolbox that enables incident commanders to develop highly realistic and varied emergency situations from an easy-to- use drop-down menu. “The incident commander has total flexibility to custom design scenarios,” adds Voakes. “For example, these can feature a large number of airplanes, multiple fires and fuel spills, and even people on the ground—it’s basically unlimited.” While a traditional ARFF firefighter may typically participate in real-world training once every year or every other year, the Striker Simulator training can be ongoing and on a regular schedule. The typical 24-hour firefighter shift schedule presents an ideal opportunity for blocks of time that could be used for training, and the Striker Simulator enables realistic, more varied, and more intensive training. 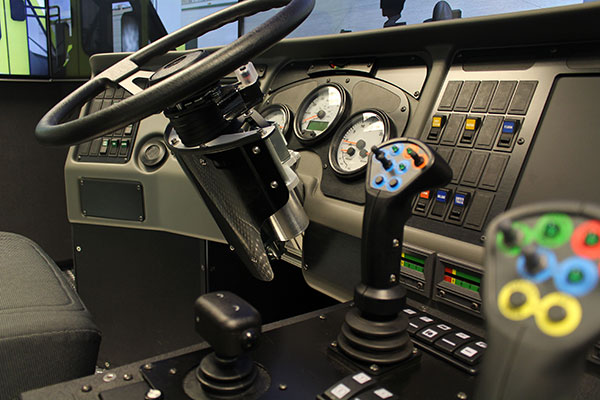 At its most basic configuration, the Striker Simulator includes a laptop computer that is synchronized with the steering wheel, joystick control, and pedals. This advanced configuration includes actual Striker cockpit components and a complete 180-degree view ahead—featuring up to three 70-inch widescreen HD monitors—and a fourth overhead. “It’s one thing to see photos or video of the Striker Simulator, but quite another thing entirely to operate it from the simulator’s driver’s seat,” said Voakes.  “You are buckled into an actual driver’s seat; it’s unlike anything else available.”

The benefits to the ARFF industry are significant and far-reaching. In order to train using a real ARFF vehicle, the apparatus must be taken out of frontline duty “rescue readiness”. Plus, there are significant incremental expenses involved when training with a real truck – such as additional fuel costs, vehicle maintenance, and tire wear, for example—that can be avoided with the simulator.

The trend to customizable simulators is gathering momentum. “It’s never going to completely replace driving the actual truck,” notes Voakes. “However, the younger generation of drivers all grew up on video games. My gut feel is that one day, in the not too distant future, everyone is going to have this type of advanced simulator in their firehouse.”

A “Tip” for Everyone from the Extrication Crew to the Can...