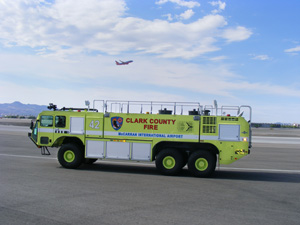 The new Striker 6 x 6 at McCarran features a 680-hp engine, TAK-4® independent suspension and a seven-speed automatic transmission. Its firefighting systems include a 3,000-gallon water tank, a 420-gallon foam tank, and both a roof turret and low attack front bumper turret (each rated at 625/1,250 gallons per minute). The vehicle also features 460 pounds of Halotron that is delivered through a 150-foot hose reel as well as a second hose reel in a lower compartment for water and foam discharge.

McCarran International Airport is the nation’s ninth busiest, and is located five miles south of downtown Las Vegas. The airport is owned by Clark County, Nevada and is operated by the Clark County Department of Aviation.