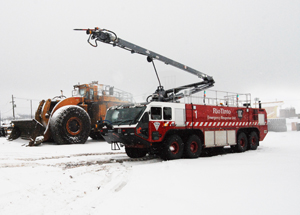 OSHKOSH, WI—Oshkosh Airport Products Group, a division of Oshkosh Corporation, placed an Oshkosh® Striker® 8×8 aircraft rescue and fire fighting (ARFF) vehicle into service with the Iron Ore Company of Canada (IOC)—Canada’s largest iron ore producer—at its facilities in Labrador City, Newfoundland and Labrador. The Striker’s large water capacity, combined with its maneuverability and reputation for operating at heights in and around the mining operations, make it uniquely qualified for this application.

“With the Oshkosh Striker, we’re blazing a new trail,” said Jamie Stagg, IOC Superintendent, Emergency Services and Security. “Our engineering team evaluated a wide range of traditional fire apparatus, including aerial ladders and platforms that can operate at heights. But when we reviewed our number one fire protection priority—the mine site itself (with its rugged road and no water supply) – we decided to go with the Striker.”

The Oshkosh Striker is built to perform under extreme conditions, and is equipped with proprietary technologies such as the Oshkosh TAK-4® independent suspension system, triple agent firefighting capabilities, and Command Zone™ advanced electronics for maneuverability, firefighting power, and reliability. The Striker on duty in Labrador City features a 4,500-gallon water tank, a Snozzle® high-reach extendable turret (HRET), a foam system, a dry chemical system, a structural firefighting package (with preconnected hand lines), and a winterization system for temperatures that can plummet to –40ºF.

The Oshkosh Striker also features the Eagle Eye™ Driver’s Enhanced Vision System (DEVS) that combines a moving map display with an infrared thermal imager for enhanced visibility and situational awareness in poor conditions. In addition, the Eagle Eye system (with its wireless data link) allows for critical information exchange—in real time—between the Striker’s crew and command center for heightened communications during an emergency.

“Around our processing plants, the roads are paved and have accessible fire hydrants—but then you transition to eight kilometers of gravel roads to reach the mine site,” said Stagg. “In the springtime, when the winter snows thaw, those gravel roads in and around the mine can be slippery and difficult to navigate. With rough terrain and 320-ton haul trucks the size of airplanes, the Snozzle will allow us to quickly respond to any type of emergency while keeping our Emergency Services & Security team out of the line of fire. That’s why we believe the Striker is the ideal truck for our application.”

Photo caption: This Oshkosh® Striker® 8 x 8 is in service at the Iron Ore Company of Canada in Labrador City.