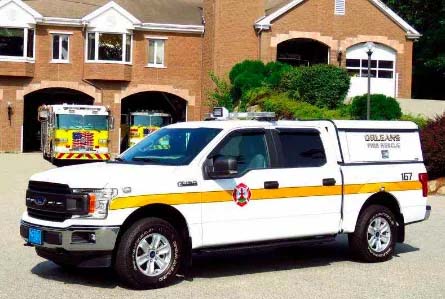 Orleans (MA) Fire Department and some town officials think a new fire station is in order and are eyeing land owned by the Nauset Regional School District as a possible site, according to a report published by WICKEDLOCAL.com.

The town hasn’t committed to a building a new fire station, but did appropriate $100,000 to help decide to whether to renovate or build on to the current structure.

The town’s architectural consultant said the cost of bringing the current station up to code, as well as the cost of the temporary structure might cost more than building a new fire station, the report stated.

The selectboard members agreed to research expanding the feasibility study to see whether the funds could be allocated for designing and building a new fire station, according to the report, which also stated that there remains $48,000 in the original appropriation.

The site under consideration at the school might not be as readily available as thought as the report indicates there is a lot for the school district to consider.

Taking out two to three acres from the school site would require relocations of playing fields and the reduction of the overall space in which sports could be played, the report said.

Although the Orleans selectboard doesn’t have money to build a new fire station yet, or even to design one, the selectboard members agreed to start talking to the school district to see if there was any room for negotiations on the land.

With representatives on the school district board from Brewster, Eastham, Wellfleet, as well as Orleans, the board will have the first say in what happens to the land, the news report says.