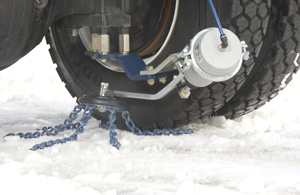 On July 18, 1988 Patrick Freyer, employee number one, made the first phone call on behalf of Onspot of North America, Inc. and its three investors from his basement in Trumbull, Connecticut. That was 25 years ago.

Today, Onspot automatic tire chains can be found as a factory-installed option from 211 OEMs and more than 1,400 Onspot dealers throughout North America.

The Company (ONA) purchased the North American marketing rights to the Swedish invention in 1988. ONA imported the product into the United States from 1988 to 1992. During 1992 the original Onspot Company, located in Linkoping Sweden, was purchased by VBG Group of Vanesborg Sweden who still owns the Onspot name, drawings, and patents today.

Freyer and his partners were convinced that the only way they could stay competitive, and offer quick availability was to manufacture in the United States. They chose North Vernon, Indiana, as the factory location since it was centrally located, had a skilled workforce, and was considerably less expensive to operate compared to the east coast. After leasing a building for five years, Onspot built its own factory one block away in North Vernon and has since added to the factory twice allowing a total of 30,000 square feet. In 2012, ONA purchased a 7,400-square-foot building and three-acre parcel next door to the factory that is used for warehousing.

Knowing that customer service is paramount, Onspot also employs five regional managers in Connecticut, Indiana, Colorado, and California who are well versed in sales as well as the service aspect of the product.

Now entering 2013, Onspot has just completed its best year despite budget cutbacks on the municipality side of the business, Onspot’s biggest market. The safety and convenience advantages of Onspot automatic tire chains has dramatically gained popularity among end users who operate fire trucks, ambulances, school buses, utiilty trucks, fuel oil delivery trucks, and over-the-road tractor trailers to name a few. “With thousands and thousands sold every year, we have come a long way since 1988, when the company sold a grand total of 126 sets of Onspots–and no, we did not make any money that year,” says Freyer who is still Onspot’s president today.