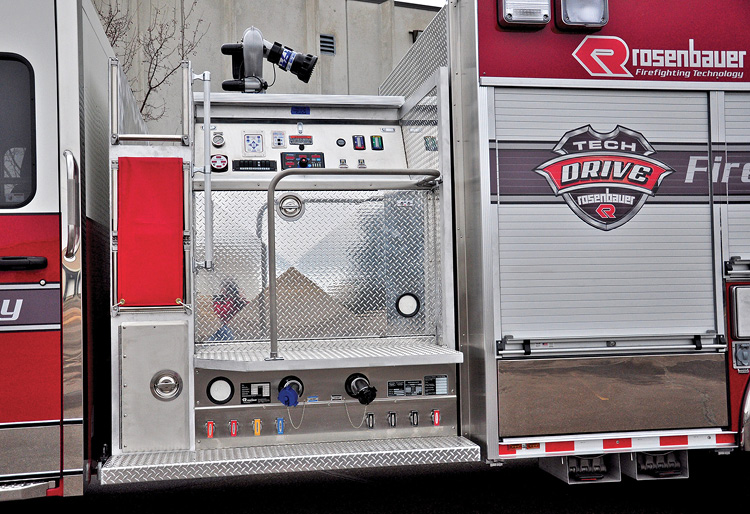 Stop in any fire department and ask about preferences for pump panel location, and you’re likely to get involved in a lively discussion. 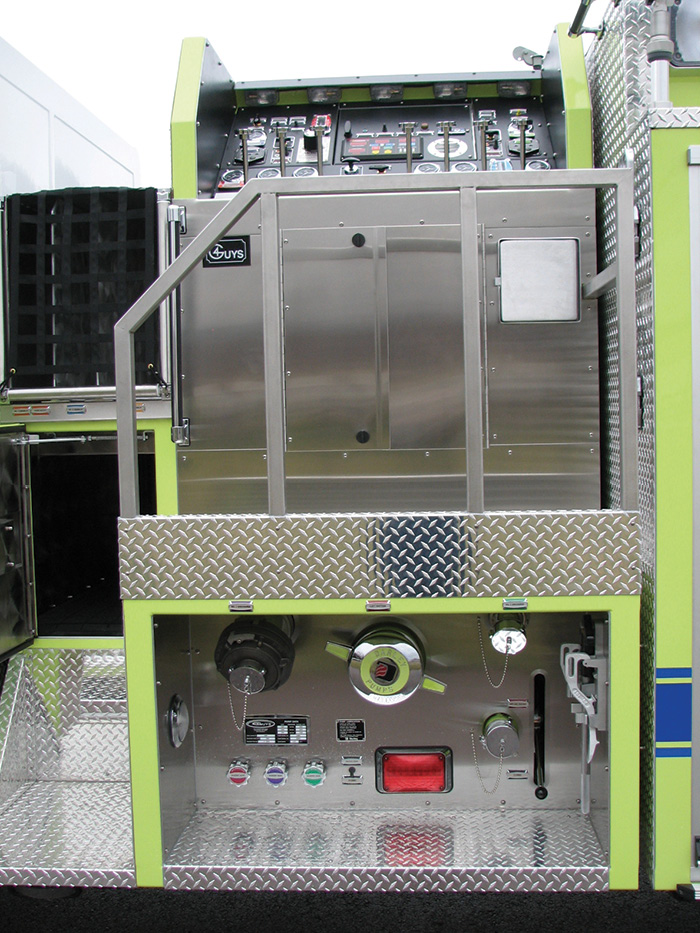 1 District 16 North Branch (MD) Fire Department had 4 Guys build this pumper on a Spartan chassis with a pump panel raised above the driver’s side running board and facing the center line of the vehicle. (Photos 1 and 2 courtesy of 4 Guys Fire Trucks.) 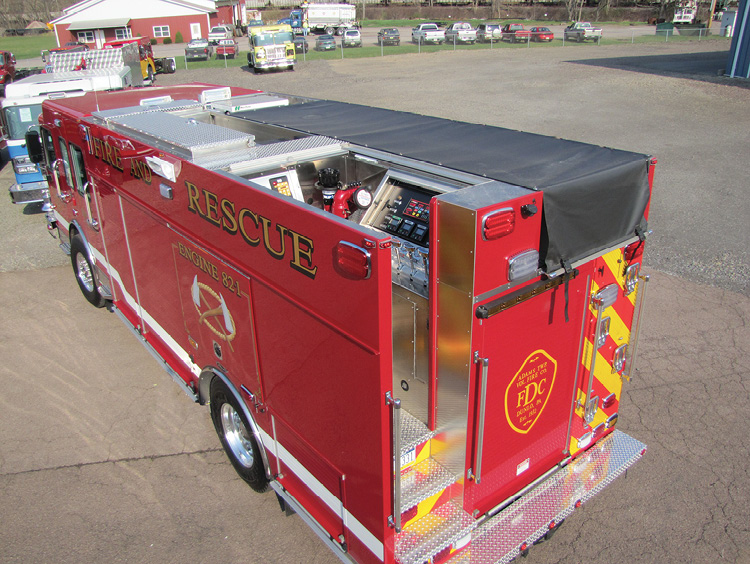 2 4 Guys built this rear-mount pumper on a Spartan chassis for the Adams Township (PA) Fire Department with a pump panel at the top left rear of the vehicle, accessed by a three-step stairway.

Mark Brenneman, assistant sales manager for 4 Guys Fire Trucks, says the most unusual pump panel location that 4 Guys has put on a pumper is a top-mount panel accessible from only one side of the vehicle. “We built a pumper for District 16 North Branch (MD) Fire Department on a Spartan chassis that has an 18-inch-wide compartment behind the cab over which are the crosslays,” Brenneman says. “The pump panel for the 46-inch side-mount pump is one step up from the running board and is aligned along the axis of the truck, facing the officer’s side.”

4 Guys also built a similar top-mount pump panel for a rear-mount pumper for the Adams Township (PA) Fire Department. “On the driver’s side of the pumper, where the taillights would typically be, is a three-step stairway to the operator’s panel that’s on the axis of the truck,” Brenneman says. “The pump is a Hale RME 1,500-gallon-per-minute (gpm), and all the pump outlets are in a rear compartment behind a roll-up door.”

John Schultz, director of pumper and custom chassis products for Pierce Manufacturing Inc., says Pierce has built a number of inward-facing top-mount control panels on its PUC pumpers. “The pump panel is located in a nontransverse walkway accessible from the driver’s side of the pumper and sits up high in the body panel,” Schultz notes. “Its advantage is that it’s a high perch for the pump operator and gives a wide field of view, especially to the officer’s side of the vehicle and also to the rear.”

3 Rosenbauer built this “Safe Scene” top-mount pump panel that’s 18 inches above the side-mount pump’s discharges and intakes, facing the officer’s side of the rig. (Photos 3-5 courtesy of Rosenbauer.) 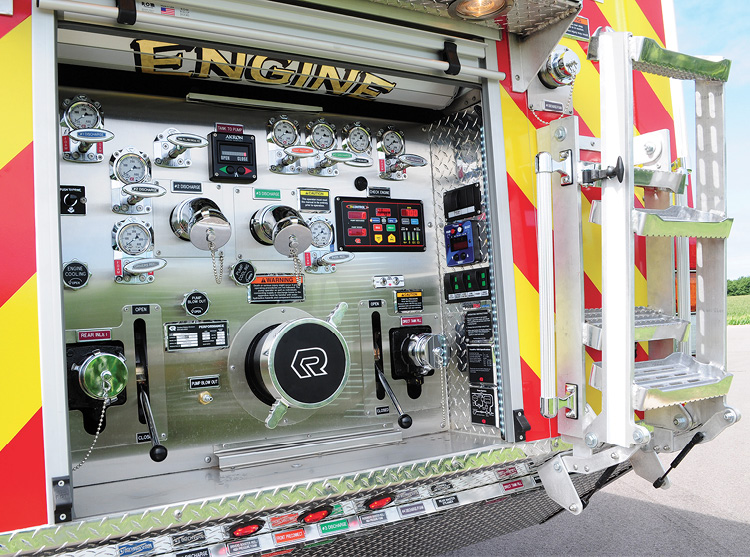 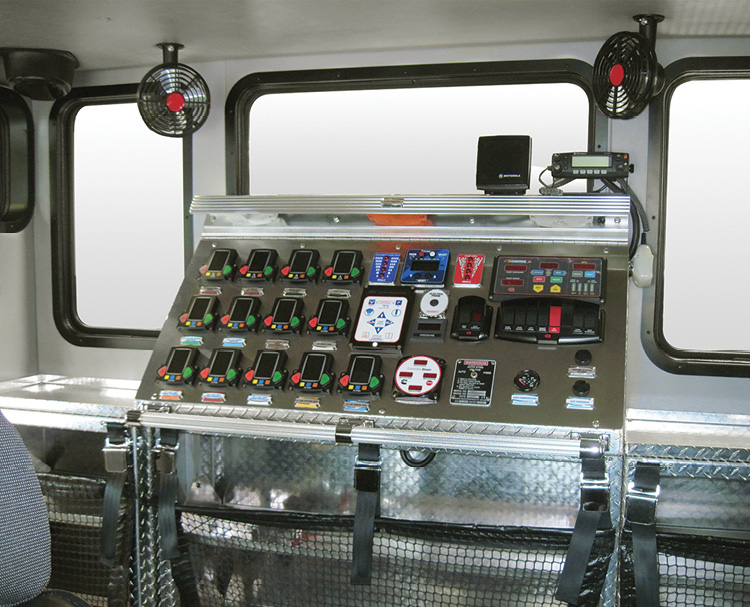 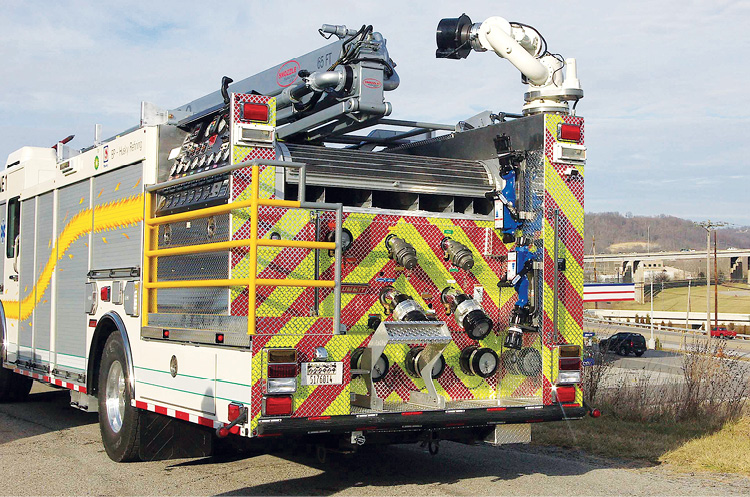 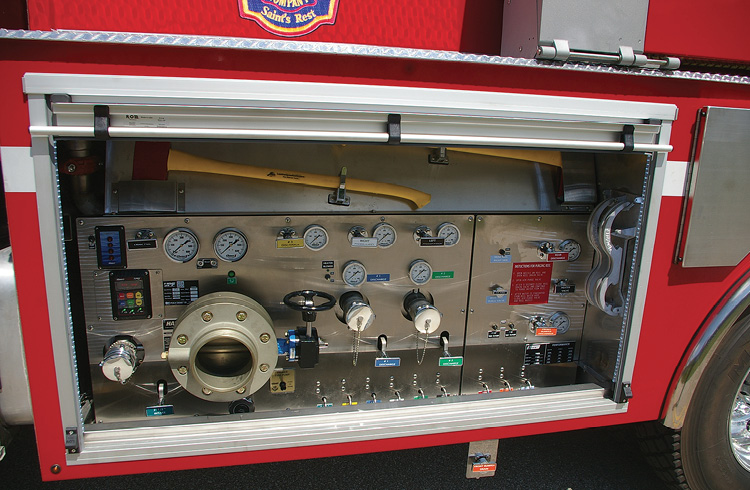 7 This pump panel is located behind a roll-up door low on the driver’s side of a pumper-tanker Summit built for the Candor (NY) Fire Department.

Donley Frederickson, purchasing manager for Rosenbauer, notes that the three major locations where Rosenbauer places pump panels are on the side, the top, and the rear of pumpers. “The side control panel is the one seen most often, followed by top-mounted panels and rear mounts, which can be in either left- or right-side compartments or at the rear,” Frederickson says.

Roger Parker, Rosenbauer’s central regional sales manager, points out that closed top-mount pump panels are popular in both hot-weather and cold-weather climate areas of the country. “We build a lot of closed top mounts on custom chassis, and they can be both heated and air conditioned,” Parker says. “And, many of the side-mount and rear-mount pump panels are going behind roll-up doors to keep them out of the weather. We’ve even put roll-up doors and vinyl covers on top-mount panels.”

Schultz points out that Pierce has built a considerable number of enclosed top-mount pump panels for various customers. “We’ve located the pump panel in the cab for a lot of extreme-climate customers,” he observes. “A lot of them go to clients in northern climates because of extreme cold weather, but we’ve also done quite a few for customers in southern and southwestern climates where they need air conditioning to beat the heat.”

Rosenbauer also builds what it calls the “Safe Scene” pump panel, which puts a top-mount pump panel platform 18 inches above a side-mount pump’s discharges and intakes. “Because the top-mount controls face into the truck, the operator is able to see over the pumper to the other side of the fireground as well as to the front and the rear,” Parker says.

Summit Fire Apparatus has built a number of rear-mount pumpers with what president Joe Messmer calls a “pulpit-mount pump panel.” Messmer says that Summit’s pulpit pump panel is located on the left side of the pumper above a slide-out platform where the operator would stand. “The pump panel is built into the body of the truck facing in toward the center of the vehicle,” Messmer points out. “The operator is up high on the truck, so he can look over the top and see what’s happening on the opposite side. We recently built three 3,000-gpm rear-mount pumpers with pulpit pump panels for BP, with one on a Spartan custom chassis and cab that went to its Toledo, Ohio, facility and two on HME chassis with right-hand drive for their facilities in Australia. 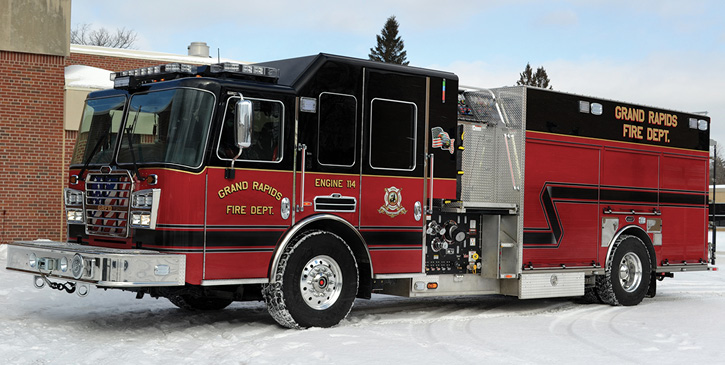 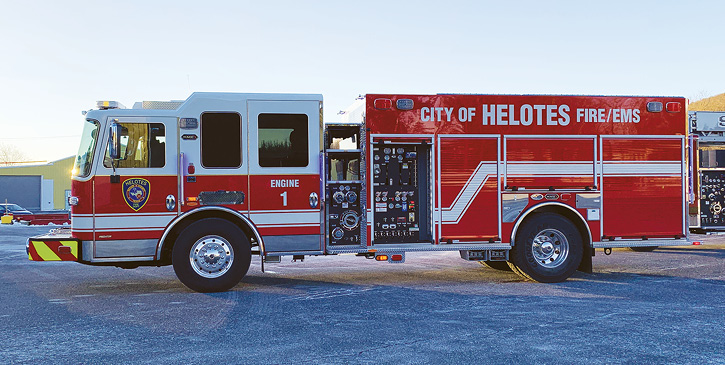 9 Helotes (TX) Fire Rescue had KME build this PRO pumper with a narrow-width side-mount pump and a pump panel located in the adjacent L1 compartment behind a roll-up door. 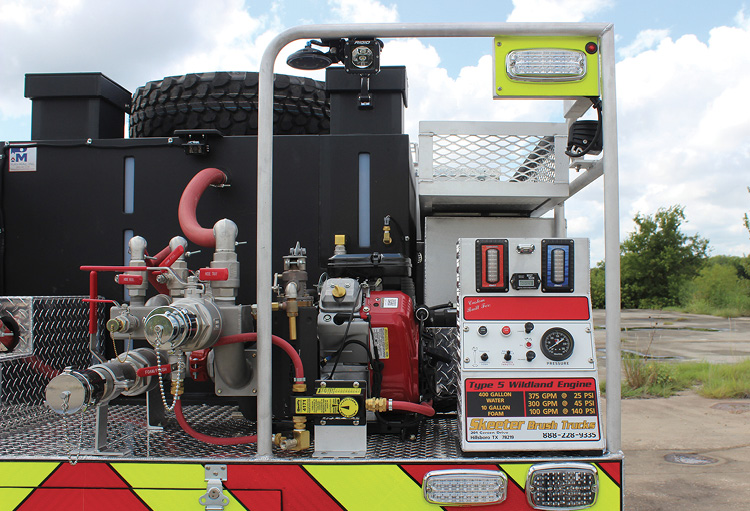 11 Fifty percent of the wildland and brush trucks that Skeeter Brush Trucks builds now have remote controls in the cab for pump-and-roll operations and also a remote key fob to allow the pump to be operated from the end of a hoseline.

13 The White House (TN) Fire Department had Unruh Fire build this rear-mount wildland pumper with a pump panel at the rear of the rig.

Mark Kopunek, product manager for KME, says KME builds a PRO configuration side-mount pumper with a top-mount control panel. “There are pull-out steps and a platform above them holding the pump panel that faces the officer’s side of the pumper,” Kopunek points out. “A hand rail at the top is designed to swing behind the operator and serve as a safety rail. We built one for the Grand Rapids (MI) Fire Department with a Waterous CSU 1,500-gpm single-stage pump that the department liked so much, they bought a second one.”

KME also offers the PRO pumper with a notched cab over the pump that gives the benefit of additional compartmentation made available by compressing the pump panel configuration, Kopunek says. “The notch allows us to shorten the overall length of the vehicle,” he adds, “like the PRO pumper we built for the Helotes (TX) Fire Department with a compressed Hale CXS 1,500-gpm single-stage pump and panel in the L1 compartment.”

Kopunek adds that KME recently built a pumper for the Lewiston (NY) Fire Department that uses the Scene Apparatus Manager (SAM) operating system, which is a joint venture of IDEX and Akron Brass Company. “The Class 1 UV800 display screen on the pumper controls all the electric pump functions on the truck—from discharges and valves to the engine pressure governor, primer, and more,” he says. “And, there’s a separate removable notepad device that provides remote access to all those functions that are controlled.”

Bill Davidson, vice president of sales for Skeeter Brush Trucks, says the standard location for pump panels on the wildland pumpers Skeeter has been building is on a pedestal on the passenger side rear deck of the body facing rearward. “We also have options that build the pump panel into the rear face of the vehicle or in an aluminum housing fitted around the pump,” Davidson notes. “About 50 percent of the trucks we build now have remote controls in the cab for pump-and-roll operations and also a remote key fob to allow the pump to be operated from the end of a hoseline.”

Larry Segretto, vice president of Boise Mobile Equipment (BME), says BME-built wildland apparatus pump panels are typically at the side or the rear of the pumper. “CAL Fire runs a left-side pump panel for its 500-gpm midship pump, while the discharges are all at the rear on its Model 34 Type 3 engine,” Segretto says. “On Type 6 vehicles, because they are used on a lot of two-track roads in heavy brush, there’s often not a lot of room to stand at the side of the truck, so they want their pump panel at the rear of the engine.”

Jason Kline, Colorado and Wyoming sales manager for SVI Trucks, says that many fire departments are trying to minimize the size of pump panels and their layouts. “They accomplish that by using electronic valves so that the valve and the handle don’t have to line up because you’re not running linkages,” Kline points out. He adds that SVI has not done many top-mount pump panels lately but more rear mounts, where discharges are at the rear of the vehicle and the pump panel is located in the end compartment on either the driver’s or officer’s side.

Schultz says Pierce has built small pump panels for nontraditional pumps on some of its aerial apparatus. “The vehicle is typically set up as a truck company with a small auxiliary pump that has a small panel, usually in the transverse compartment,” Schultz points out. “We’ve even done something similar where we have a small pump panel on the front bumper to a small pump to run a front bumper trash line.”

Todd Nix, apparatus consultant for Unruh Fire, says the location of a pumper’s pump panel depends on the department’s needs and the type of vehicle it wants built. “On brush trucks, the pump panels are usually on the rear of a flatbed,” Nix says, “but some departments want the pump panel in the middle of the truck on a walkway behind the cab where a firefighter can control water to fight the fire while the driver operates the vehicle. On quick-attack vehicles, most of the time pump panels are at the rear of the vehicle, but we’ve also done some curbside pump panels, usually behind roll-up doors.”