to the rescue carl j. haddon

Six or seven years ago, I stood in front of a classroom full of students at FDIC International and spoke about the future of automobiles and how it would affect vehicle rescue practices.

This included such things as vehicles whose computer systems took control of the car in the event of an imminent accident, cars that parked themselves, and autonomous or driverless vehicles. My attendees looked at me like I had three heads and chuckled. So, how do you like me now?

This all started for me in 2007 when a colleague made a statement about how the new Volvo XC90 was made of materials that were so tough none of the rescue tools from that time could conquer it. Although he was correct to an extent, another firefighter and I set out on a mission to prove my colleague wrong, which we did. That was 10 years ago. The 2017 model year version of that same vehicle now contains five times the amount of ultra-high-strength steel as the 2007 release did!

Up to the Task

If you were to ask me if today’s hydraulic rescue tools are five times better or stronger than the new ones we were using in 2007, I’d have to answer no. That said, many manufacturers have made improvements in blade, arm, cutting and spreading force, and mechanical advantage designs. Others have simply added new color schemes, lights, and other nonessential wiz bang creature features. There certainly has been vast improvement in the battery-powered tool lines, as battery technology has improved from when the first manufacturers tried introducing battery-powered tools in the 1980s. 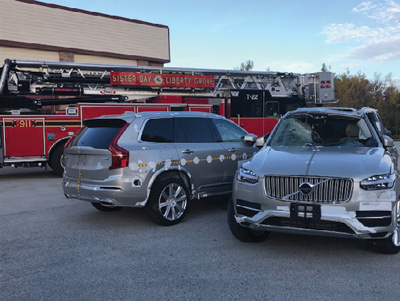 1 At a recent training event, two 2017 crash-tested Volvo XC90 hybrid vehicles. One of these test cars had sustained a frontal offset (corner) 40-mph test, while the other had been subjected to a 45-mph side-impact test. (Photos by author.)

Can the new rescue tools conquer the strength and hardness of the metals used to make that 2007 Volvo XC90 that I refer to above? My personal experience tells me that some of them can and some of them can’t. I will tell you that in the late fall of last year, I taught the full lecture and hands-on version of my FDIC International New Vehicle Extrication class in Wisconsin with two brand new, crash-tested 2017 Volvo XC90 Hybrids—the retail value of these two cars was in excess of $160,000. One of these test cars had sustained a frontal offset (corner) 40-mph test, while the other had been subjected to a 45-mph side-impact test. I share this information simply to offer that these were two of the toughest vehicles on the market, and they had virtually every option available on them. They had also been severely punished during the crash testing, which gave our students real-life scenarios on monster-tough cars as opposed to the junkyard cupcake vehicles most of us are afforded the opportunity to train on. 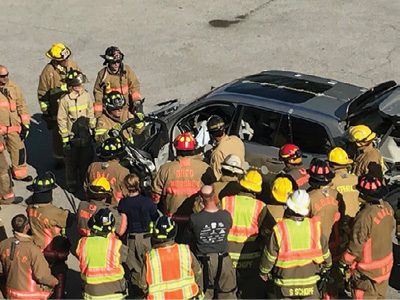 2 Four or five departments were in attendance with an array of traditional hydraulic and battery-powered rescue tools that spanned various manufacturers and years.

We had four or five departments in attendance and an array of traditional hydraulic and battery-powered rescue tools that spanned various manufacturers and years. We had tried-and-true old-school (circa 1970s and 1980s) tools to battery-powered and hydraulic tools that were brand new and never used before. Invitations had been sent to rescue tool manufacturers that were not represented in the cadre of tools that we had to use on these new cars. Although many of the manufacturers’ products were represented, none of the manufacturers we invited to send tools or representatives showed up at the event. We wanted to offer a fair shot at these new Volvos for all toolmakers.

During the lecture the night before, students had been briefed on what to expect and how to attack these new vehicle technology challenges that they would encounter the next day. During the hands-on day, students were shown new techniques, tactics, and strategies and given junkyard softball cars to try these new techniques on as if they were hardcore new vehicles like the Volvos. We do this for two reasons: The first is to let them apply the tactics they learned in the lecture, which can be used on new and old cars alike, and second is to let them see and feel firsthand just how differently (and light speed quickly) their individual rescue tools would react (or not react) when used on the toughest of today’s automotive metals and components compared with soft junkyard cars.

For example, there is a very real safety hazard that exists while trying to use combi (combination cutter and spreader in one) tools on certain components of new cars. Simply stated, many combi tools have straight blades (like scissors) for cutting. Imagine taking a pair of scissors and trying to cut a chain saw file. With adequate pressure applied and assuming that the scissor blades can gain a purchase so as not to spit the file out, one of two things is going to happen: either the scissor blades are going to break and fly apart because they are not made of materials that are as hard as the metal of the file, or the scissors are going to “snap roll” and skew the scissor blades. If you translate this same scenario into using a hydraulic combi tool on an ultra-high-strength-steel component on a car, wherein more than 100,000 pounds of cutting force are applied, the results are often that the blades catastrophically fail and violently come apart. The more common mishap is that the combi tool snap rolls and skews, breaking the operator’s hand or wrist in the process and damaging the rescue tool.

Ok, don’t shoot the messenger. If I hadn’t personally seen it happen and had many other reports of it happening, I wouldn’t share it. Some will say that a combi tool is the wrong tool choice for that application. I agree, but tell that to the crew that only has a combi tool while they wait for the next due rig or those departments that swear by combi tools because “it’s what we’ve always been successful with and, let’s face it, 90 percent of our pin jobs only require a door pop with a combi tool!” Remember, tactics that worked on old-school building construction fires were modified because of of new construction material use. The same very much holds true for extrication practices. We just don’t want to see anyone hurt or worse.

Regardless of what brand or type of rescue tools you’re using on new vehicles, remember that because of the way they are made and what they are made of (unlike with old cars), “things” happen (tools find their seat, components snap or fly off, stabilization is rocked off) in the blink of an eye, and often very violently and loudly.

What these students in Wisconsin learned is that today’s and tomorrow’s vehicles are VERY different than those we’ve always been able to train on. Likewise, the rescue tools of today are certainly better than those from the 1970s and 1980s. During these classes, some of the older tools used were successful, and some of the newer tools used were not. The single biggest takeaway from the mix of really tough new vehicles and having the best of the best new tough rescue tools still comes down to the most versatile component at any vehicle rescue site: the operator. We’ve seen it time and time again. Older rescue tools in the hands of an operator who has honed his craft by learning about the new vehicle technology of the day can be safe and successful on new cars. Conversely, the cocksure mildly educated know-it-all with brand new state-of-the-art rescue tools often knows just enough about what he’s working on to get himself, his patient, or his crew seriously injured. None of us wants to contribute to the problem at hand. We all want to be part of the solution and have good patient outcomes. Remember, YOU are (or should be) the best tool in your toolbox!