The South River (NJ) Fire Department is a volunteer department with 70 firefighters operating out of a single station located in a flood-prone area in the borough of South River. The fire department had been talking with the borough council and mayor about the need for a new firehouse for a number of years, but it took Hurricane Sandy in 2012 to get things moving much more quickly on the drive for a new station. 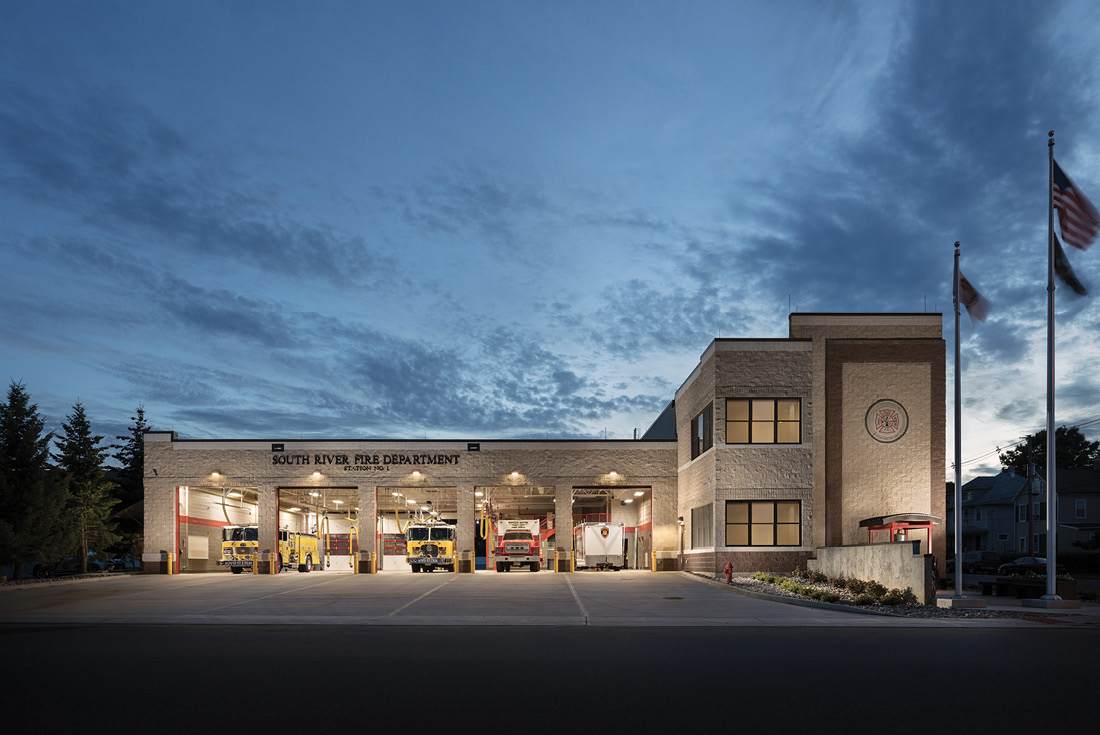 “Our existing firehouse was nearly 100 years old,” says Art Londensky, South River Fire Department’s fire marshal. “On one side of the old building, we had to put down metal road plates to prevent the floor from caving in because of the weight of the pumpers. On the other side of the station, you couldn’t walk around the ladder tower in the bay because it was so tight to the walls. With 70 personnel using the fire station, there were only two toilets and two sinks in the building, and there was no place for firefighters to decon, so they had to decon at home.”

When Hurricane Sandy hit, the fire station was in danger of being flooded. “The water was about a half a block away, so we were getting ready to evacuate the station,” Londensky says, “and when the South River crested, the water was almost to the front door of the firehouse. After that, the mayor and council agreed on the need for a new fire station headquarters.”

Londensky says the department formed a committee that included firefighters with various areas of expertise, such as plumbers, electricians, a laundry technician, and others, to research architectural firms that specialize in building fire stations. “We sent out requests for qualifications and got back 15 responses,” he says. “We narrowed them down to six, interviewed all six, and chose Mitchell Associates Architects.”

Bob Mitchell, principal in Mitchell Associates, says the fire department and borough council wanted to be sure that the new station would be built out of the flood-prone area of the borough. “The borough is 95 percent built out, with much of it located in the flood plain,” Mitchell points out. “Determining a new site became a complicated two-year process. They initially selected a site in a gracious residential area, and in spite of a design that nicely fit the residential neighborhood, citizen opposition to the site was overwhelming,” Mitchell says. That sent the station committee and borough council on the hunt for another suitable location. Londensky notes that the borough owns the fire station and all of the apparatus and equipment, while the department supplies the volunteer firefighters to staff the apparatus. “There weren’t a lot of places where we could put a 21,388-square-foot fire station,” he says, “but the borough eventually located a combined parcel of a former Knights of Columbus property and a gasoline station.”

After environmental and geotechnical analyses of the combined properties, it was discovered that the new building would need to be constructed on 325 pilings; contaminated soil would need to be removed to a depth of 15 feet; and, because the water table depth was five feet, contaminated water would have to removed as well. 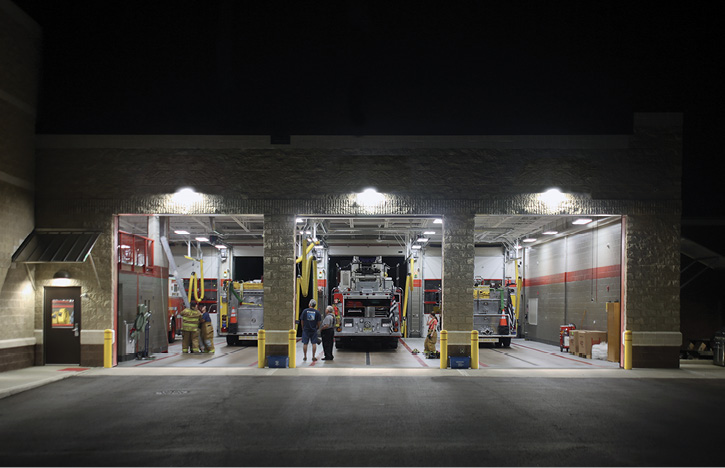 2 The rear of the South River fire station showing the back entrance to the three drive-through double-deep apparatus bays. The station also has two back-in bays. 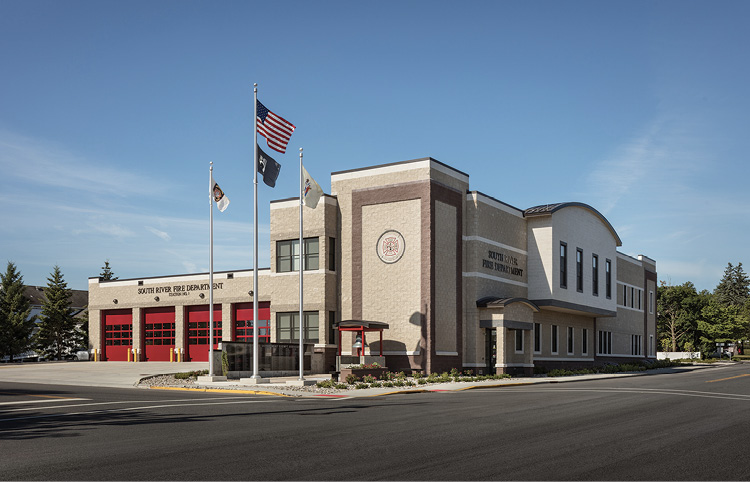 3 The Mitchell-designed station for South River is the work space for 70 volunteer firefighters. 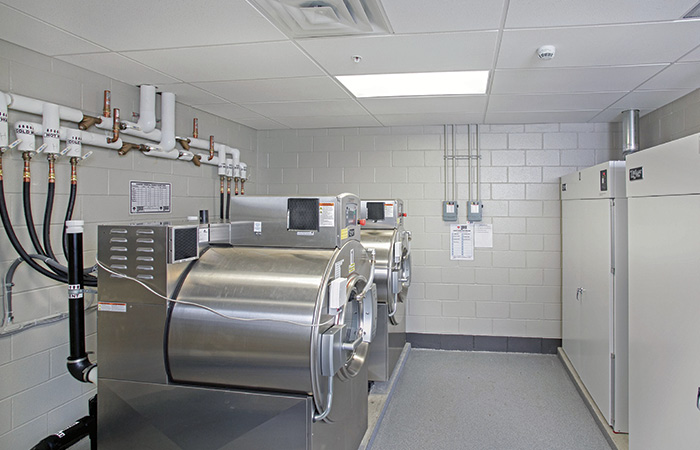 When construction was completed in June 2018, the department had a modern two-story, five-apparatus-bay fire headquarters that cost $7.5 million. Mitchell says the fire station’s first-floor apparatus room occupies 5,730 square feet and has three double-deep, drive-through bays and two back-in bays. Adjacent to the apparatus bays are two hot zone bathrooms, a decontamination laundry room, a turnout gear storage room, a general storage room, a self-contained breathing apparatus filling station, and a mechanic’s room. The first floor also has offices for the chiefs and fire commissioners, a conference room, unisex bathrooms, an exercise room, a kitchen, and a dayroom. 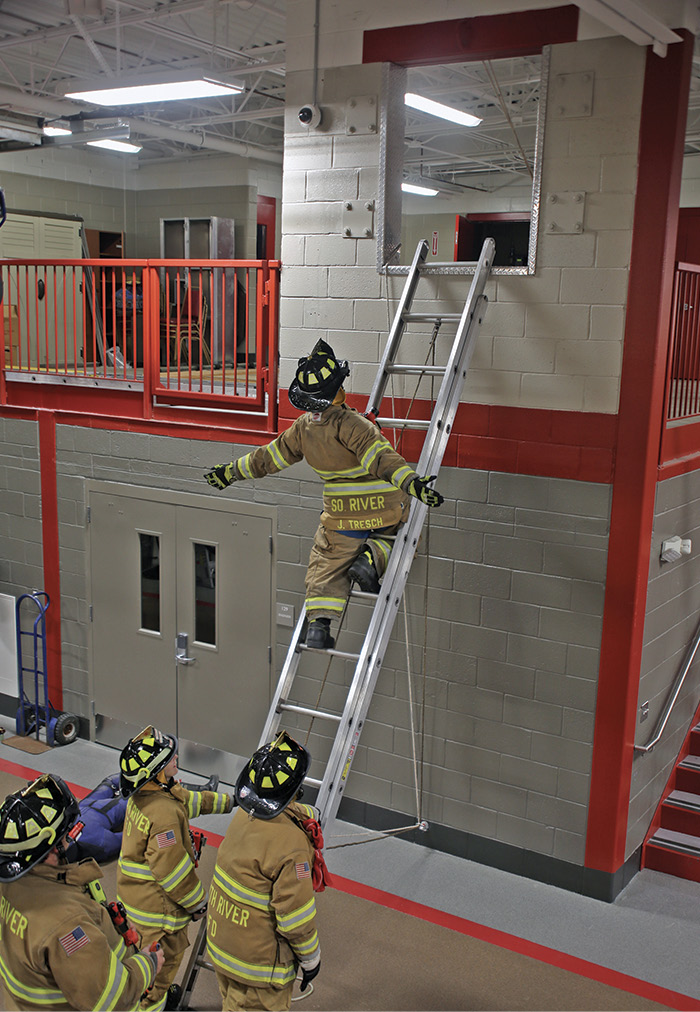 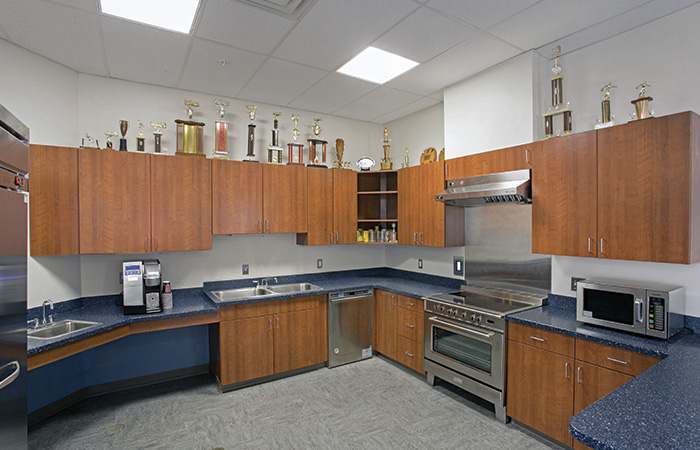 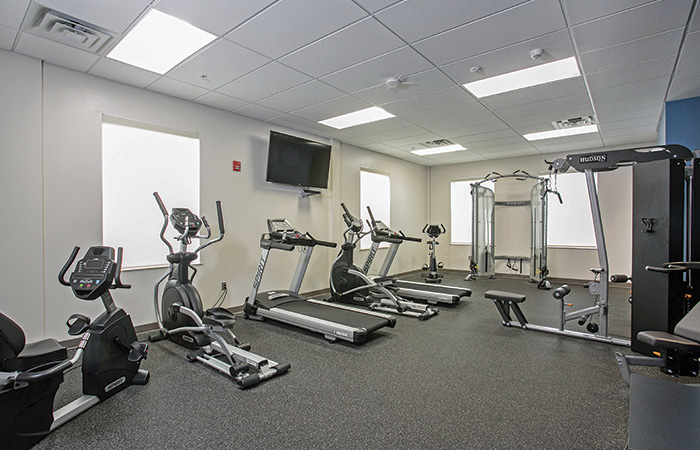 7 South River’s exercise room is on the second floor of the station. 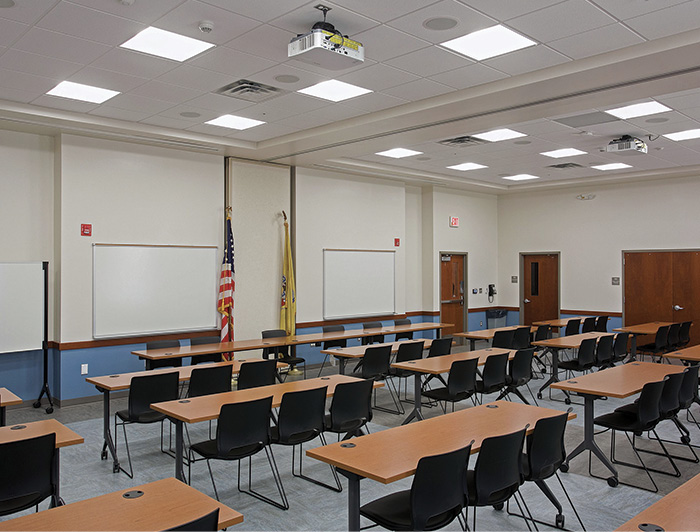 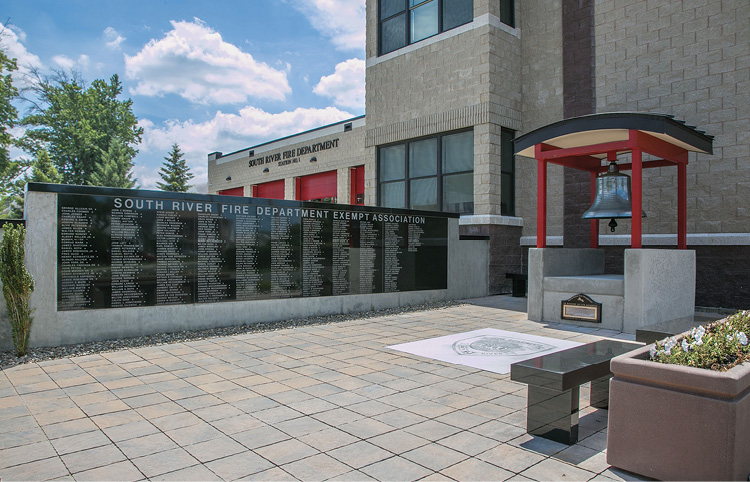 9 The front of the South River fire headquarters features a memorial for deceased firefighters. 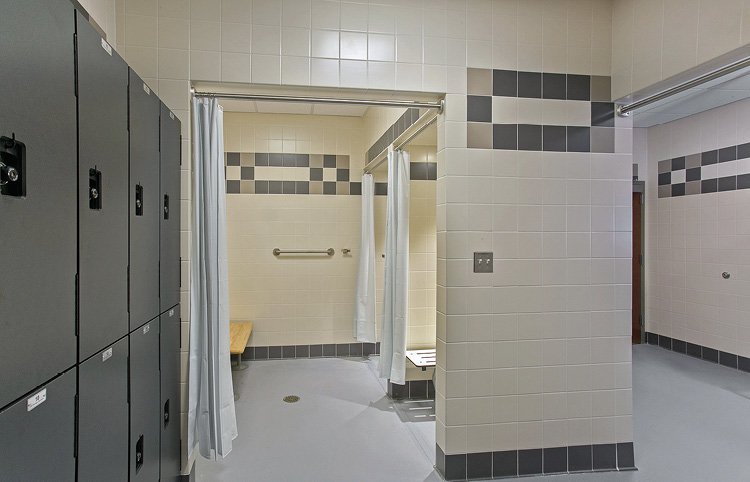 10   One of the locker rooms in the new South River station. 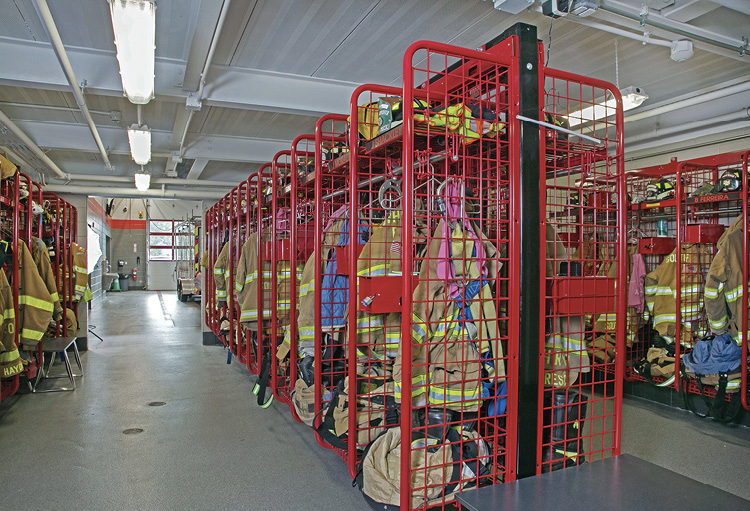 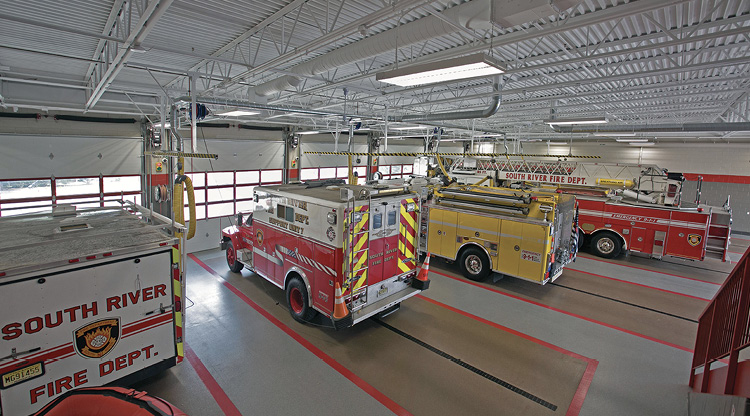 Mitchell notes that the second floor has a combination meeting and training room, a kitchenette, male and female bathrooms, three bunk rooms, a gym, a men’s locker room, a women’s locker room, and a washer and dryer room for linens. “There are two showers in the men’s locker room and one shower in the women’s,” Mitchell says. “Two of the bunk rooms have four beds each, while one bunk room has two beds. There also are stairs and a fire pole to the first floor.” In addition, the station has a mezzanine with a bailout window and a confined space extrication manhole.

Londensky says the new fire headquarters has a 100-kW diesel generator that can power the entire fire station in the event of a power outage. “We also have two 105-pound-capacity washer/extractors that each can do six sets of turnout gear at a time and two dryers that will each dry six sets of turnouts,” he adds. “And, we have a washer and dryer that we use for hoods and gloves.”

Londensky believes that Mitchell designed the “perfect functionality” into the station for South River. “The flow works well from when you come in from the parking lot, into the gear room, and onto the apparatus,” Londensky says. “We were always sure we chose the right architect, especially because he was able to work perfectly with the station committee and with the governing body to explain the size of the station and why we needed all the various elements in it.”

The new fire headquarters station houses two pumpers, an 85-foot ladder tower, a medium rescue, a trailer, and an inflatable boat. “We’re filling it out already,” Londensky says, “and the station fits all of our needs. And, the size of the apparatus bays will allow us to increase our fleet to four pumpers if necessary, so those bays are set up for four engines with vehicle exhaust systems and electrical charging drop-downs.”