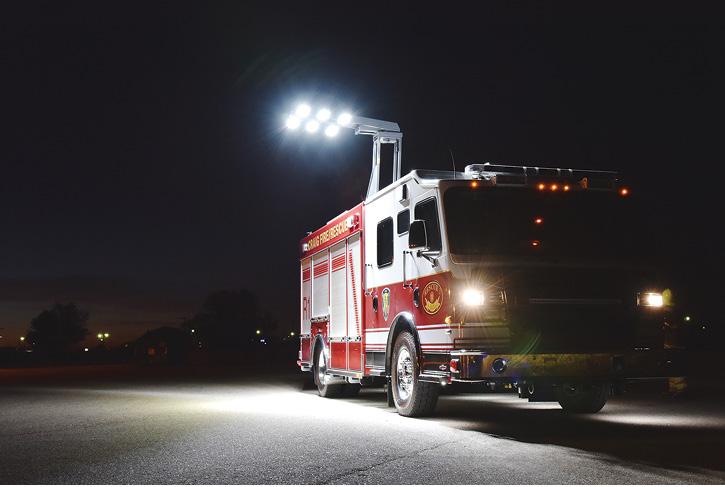 LED lighting has become the most popular type of lighting used on fire apparatus, from warning lights to scene lights to interior lighting. Manufacturers are continuing to come up with new designs and improvements to their LED fixtures with the aim of meeting the wide-ranging lighting needs of various fire and rescue situations.

Whelen Engineering makes a wide range of scene lighting for fire apparatus, says Paul Deming, Whelen’s manager of fire and EMS sales, including the Pioneer™, Pioneer Plus™, Pioneer Summit™, Pioneer Micro™, ION™, and 900 series in various models. Deming says Whelen’s dual-panel Pioneer Super-LED® surface mount scene lights are gaining in popularity, compared with recessed scene lights. “They work very well with roll-up doors, where the drum housing the retracted door at the top of a compartment could be in the way of a recessed scene light fixture,” he points out.

James Stopa, Whelen’s senior sales engineer for fire and EMS, notes that Whelen has developed the Proclera™ silicone optic, available for all Pioneer series LED scene lights, which gives combination optics of both flood and spot lighting from a single lens. “We also make the ProFocus™ multiple-focal-point solid-state optic that allows from a 10-degree to 60-degree beam with no moving parts,” Stopa adds, “which is available in our Liberty II series light bar and the Arges remote control spotlight that can be rotated 360 degrees.” Whelen also makes the low-profile Pioneer Summit series LED light that can be mounted above the windshield line and incorporates spot and flood lights and also clearance and warning lights. “Summit can also be installed in various lengths on the side of fire trucks,” he says.

Toh Meng, senior vice president of Safe Fleet’s Fire, EMS and Industrial Division, says FRC makes the SPECTRA LED High Rise scene light that allows firefighters to illuminate up to six stories of a building. “When mounted on a fire vehicle, the High Rise will illuminate the ground with 40 percent of its light, while 60 percent of it will be covering the second to sixth floor, with more concentration on the fifth and sixth floors of the structure because of the special design we use in the light’s optics,” Meng points out. “The SPECTRA LED High Rise is available in either 20,000 lumens or 30,000 lumens.”

Meng notes that FRC’s SPECTRA-MAX LED lamp heads are popular on fire apparatus, providing two rows of intense flood LEDs with an output of 28,000 lumens. The lamp heads are available in 12/24 volts DC or 120/240 volts AC models, featuring 72 ultra-bright LEDs, 60 for flood and 12 for spot beam light patterns, he says. FRC’s SPECTRA-MAX-S LED lamp heads provide three rows of long distance spot LED lights and a bottom row of LED flood lights for a total of 28,000 lumens, Meng adds, with a specially engineered lens that gives the ability to view objects farther away as well as floodlight up the scene and work area. FRC also makes the SPECTRA-MS LED lamp head in a compact and slimmer style that provides 14,000 lumens of light.

Mike Frankowiak, director of OEM sales for IDEX Fire and Safety, says that Akron Brass Company’s Weldon Division makes the Revel Scout Portable LED Emergency Scene Light, the company’s newest offering in the fire market. “This tactical LED scene light is designed to increase the safety of firefighters and emergency responders on exterior scenes or inside dark spaces,” Frankowiak says. The Revel Scout scene light combines a spot and flood light pattern of 14,000 lumens; weighs 12 pounds; has a removable, rechargeable battery; and can be surface-mounted, hung, carried on a strap, or affixed to a spike.

Sam Massa, president of HiViz LED Lighting, says that HiViz has introduced the BG2 Modular Scene Lighting System. He says the backbone of the system is a four-inch-wide light module with a variety of circuits inside allowing spot, flood, scene, and warning/marker LEDs. “Systems can be configured from any number of modules, one to 19 modules wide, with each system requiring at least one two-inch controller,” he notes.

Massa says, “The Gen 2 FireTech Brow Light is designed to produce the perfect beam pattern with the maximum volume of light in every application. The fixture incorporates a tight spot light, an extremely wide flood, and an asymmetrical down optic that shines more light in the front of the apparatus and is available in standard and smart options.”

Roger Weinmeister, president of Command Light, says his company makes four versions of light towers for use on emergency apparatus: the SL Shadow, the KL Knight, the CL, and the C-Lite series. “The Shadow series now has 360-degree rotation and a 4½-foot reach or up to a 6½-foot reach with an optional arm extension,” Weinmeister says. “The KL Knight series is a mid-range light tower with a 7½-foot reach, while our CL series is our largest tower with an 11-foot reach. We also make the C-Lite series, which is great for command units, can rotate 360 degrees, and has a 120-degree tilt.”

Weinmeister points out that the various models come in either AC or DC power configurations and that some series can carry up to eight light heads. “Many departments choose a four-light head option, which is good for mid-range scene lighting,” he says. “The light heads we use are the Whelen PFP4 in the 40,000-lumen range, the FRC Spectra-Max producing 28,000 lumens, and the HiViz Helios giving 14,000 lumens.”

Cotsmire adds that Will-Burt offers Whelen and FRC light fixtures on its light towers and has partnered with HiViz to develop LED scene lighting specifically for its towers. “We have three versions,” he says. “The X200 is a 20,000-lumen light head; the XL200 also produces 20,000 lumens but with a wider spread; and the Sirion produces 220,000 lumens. Sirion is a two-light-head system with three types of optics in it—long-range optics of 400 to 500 feet, midrange optics for wider spread of light, and near optics to light up around the apparatus itself. It won’t leave any dark areas.”

Dineen notes that Streamlight’s Portable Scene Light II is a 10,000-lumen rechargeable waterproof light with a 360-degree rotating head on a steel frame that can be stacked with up to three light units. The light offers a range of brightness run times, with a maximum brightness run time of two hours and a low setting of 20 percent (2,300 lumens) for 11 hours. The light is powered by two rechargeable lithium ion battery packs that charge in six hours and continue to charge the light and operate while plugged into an AC or DC power source.

Mario Cugini, chief executive officer of FoxFury Lighting Solutions, says FoxFury makes the Nomad® 360 Scene Light, a battery-operated light with a built-in tripod that extends up to 8½ feet tall and delivers up to 8,000 lumens. “The cordless, rechargeable LED light can operate as a spotlight, flood light, or 360-degree scene light with a run time of up to 24 hours,” Cugini points out.

Search Rope Is for More Than Search