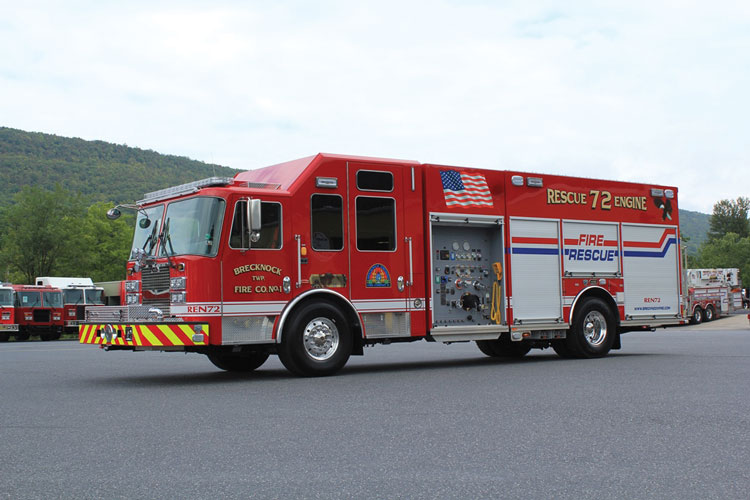 Budgetary tightness and lower staffing levels have pushed many fire departments to consider a multiuse vehicle instead of a single-use truck.

Brian Connely, account manager for Spartan Motors, says the multiuse concept goes back a few years, but the trend is continuing. “Fire departments want to combine vehicles because of a lack of personnel and tight budgets,” Connely says. “And, they want their vehicles to have a smaller wheelbase and footprint.”

Ronny Allen, marketing director for Ferrara Fire Apparatus, agrees that the trend in the fire service has skewed toward the use of multipurpose vehicles. “A multiuse vehicle might be taller and somewhat longer,” Allen says, “but it depends on what the fire department is using it for. Adding storage space and tweaking it allows more equipment to be carried, but it’s all about organizing that equipment in the compartments, sort of like organizing your closet.”

Rick Suche, president of Fort Garry Fire Trucks, says that multiuse vehicles make up many of the rigs his company has been producing. “Pretty much everything we do has a rescue-pumper body and full-depth compartments,” Suche points out. “Also, departments want their ladders and suction hose encased in the body, and about 50 percent of our trucks now have enclosed pump panels inside the cab.”

The multiuse trend even extends to brush rigs, according to Suche. “A lot of brush units are being wildland urban interface (WUI) units,” he says, “with larger chassis, pumps, and water tanks than before, some carrying a compressed air foam system (CAFS) and using live drive power takeoff (PTO) units.”

Ryan Slane, product manager for pumpers and tankers at KME, says that the trend in fire apparatus has completely shifted toward multiuse apparatus with the exception of large municipalities. “With fire departments faced with limited staffing, declining numbers of volunteer firefighters, and budget problems, they are turning away from purchasing one vehicle for a special purpose and getting a multiuse vehicle like a rescue-pumper, quint, or pumper-tanker,” he says. “On the rescue-pumpers, we’re seeing them devote four compartments for fire suppression and three for rescue equipment purposes.”

Slane says that the Pleasure Ridge Park (KY) Fire District recently took delivery of two KME rescue-pumpers, one to handle fire suppression and technical rescue and one to deal with fire suppression and hazmat incidents. “They chose the two rescue-pumpers instead of one traditional pumper and a traditional heavy rescue,” he observes. “The trend most visible in rescue-pumpers is that you have a bigger toolbox with you on every call where you can handle hazards you typically might not be prepared for.”

Vincent Smith, Pleasure Ridge Park’s chief, says his district covers 56 square miles and is split down the middle by a main highway. “We have staffed career companies on both ends of the district and in the middle,” Smith points out, “and always have used multipurpose vehicles because they allow us the capability to have one of two rescue-pumpers respond on every box alarm. We know we’ll have the vehicle there with all the equipment we might need.”

Shane Braun, Pierce’s product manager of rescue products, calls rescue-pumpers “the fire service’s true multiuse vehicles.” Braun notes that rescue-pumpers can be used as a first-due engine but also have the capability of handling vehicle crashes and other types of rescue scenarios. “They also have a good weight carrying capability for a lot of equipment built into one package,” he says.

Allen adds that Ferrara’s MVP model has been its hottest seller, combining fire suppression, rescue capabilities, and sometimes hazmat equipment onto the vehicle. “If a department were to choose to do that, they would only have to have one vehicle instead of three,” he notes.

Rob Rosenau, technical sales and contract administrator with Marion Body Works Inc., believes the trend in multiuse vehicles will continue. “My department, Manawa Rural (WI) Fire Department, recently bought a rescue-pumper from Marion,” Rosenau says. “Our reasoning was a lack of personnel for calls, so we wanted to be able to respond with one vehicle instead of two but be ready to handle anything.” The Manawa Rural rescue-pumper carries a 1,500-gpm pump, 750-gallon water tank, 20-gallon foam tank, and full complement of hydraulic rescue tools. “The biggest things driving this trend,” Rosenau adds, “are tight budgets and shortage of personnel.”

Tim Smits, senior sales manager of aerial products for Pierce Manufacturing Inc., says Pierce has seen continued growing popularity of quints. “We see that market growing because fire departments are being asked to do more with less, which is one of the reasons we built the Ascendant,” Smits says. “Ninety percent of quints run medical calls, and the Ascendant can handle them, plus it has a pump, water tank, a high-performance aerial on a single rear axle, and drives and handles like a pumper.”

Connely notes that Spartan is seeing more quints and rescue-pumpers in use as well as pumper-tankers. “A lot of volunteer fire departments are using quints where they can put an aerial in front of a building and still have pumping capabilities as well,” he says. “Departments aren’t designing apparatus around one major call any more. They are looking at statistics and determining the kind of vehicle they actually need and identifying the kind of use they’ll put that vehicle to.”

Suche adds that Fort Garry also has seen an increase in the call for pumper-tankers compared with traditional water haulers. “The pumper-tankers we’re building now have 1,250- to 1,500-gpm pumps on them instead of 500-gpm and usually 1,800-gallon water tanks,” he says. “We’ve even put hydraulic rescue tools on some of the pumper-tankers too.”

With pumper-tankers, Slane says that the region of the country usually determines their use. “The Midwest uses a lot of traditional tankers, while in the East the tanker that might be second due is often a pumper-tanker,” he notes. “It makes sense to have an additional use besides being a water hauler, and the vehicle can be used as a reserve to the department’s main engine or go out on mutual-aid calls.”