The Mt. Lebanon (PA) Fire Department had a number of issues to be addressed in the specs for a new pumper, mainly a rear-mount pump, strict angles of approach and departure, dual hydraulic ladder racks, as low a hosebed as possible, and both Class A and Class B foam tanks. Mt. Lebanon found the answer to their needs from Rosenbauer.

“Our district is in the foothills of Pennsylvania where we are a first-ring suburb outside of Pittsburgh,” says Rodger Ricciuti, Mt. Lebanon’s deputy chief. “We needed a pumper that has a drivetrain geared toward the low-end torque because we wanted pickup rather than top speed because of all the hills we encounter,” Ricciuti says. “There are some very steep transitions on some of the roads in town.”

Ricciuti points out that light rail transit runs through town and includes a 2,800-foot-long tunnel. “We have a suburban character to our fire district with an urban density,” he says. “US 19 highway cuts us in half, and we have three high schools as well of lots of other large residential and commercial buildings to deal with.” 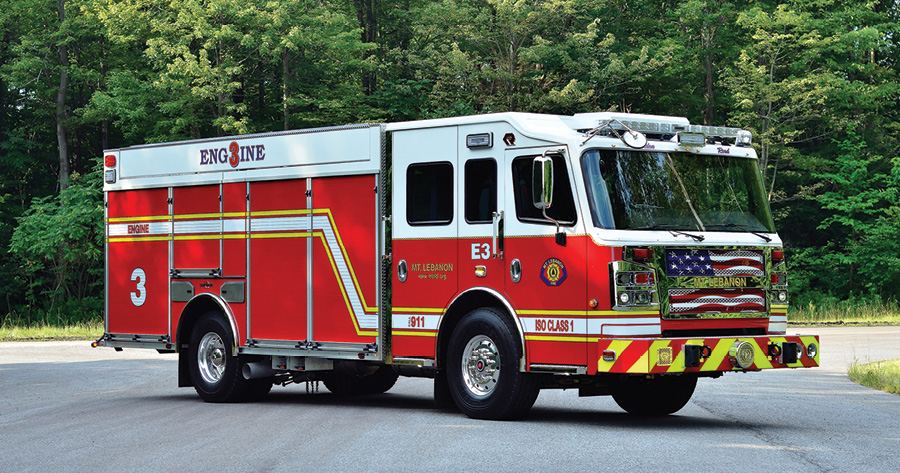 1 Rosenbauer built this rear-mount custom pumper for the Mount Lebanon (PA) Fire Department on a Commander chassis with a 60-inch-long, 100-inch-wide cab with 11-inch raised roof. (Photos 1-5 courtesy of Rosenbauer.) 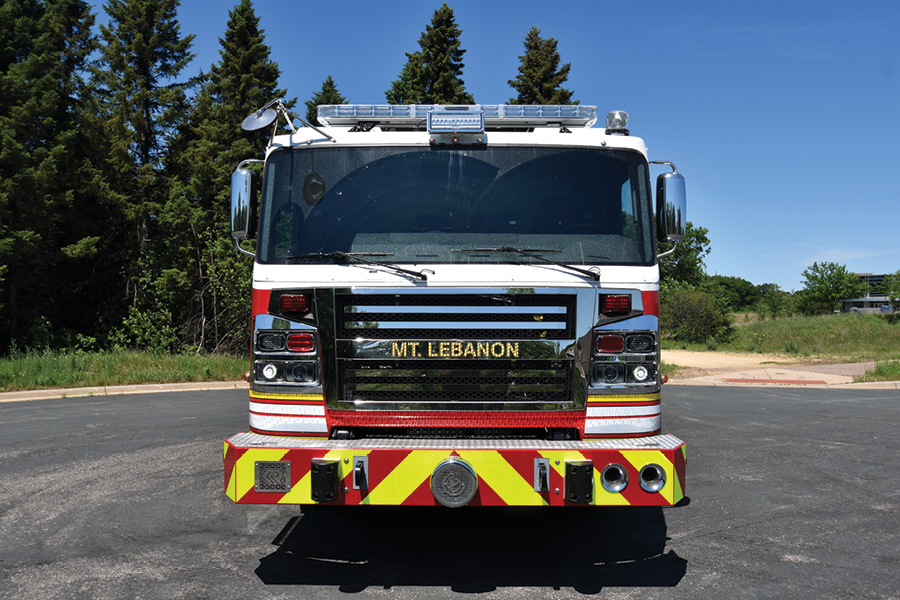 2 The pumper is powered by a Cummins 500-hp 12-liter ISX12 engine and an Allison 4000 EVS automatic transmission. 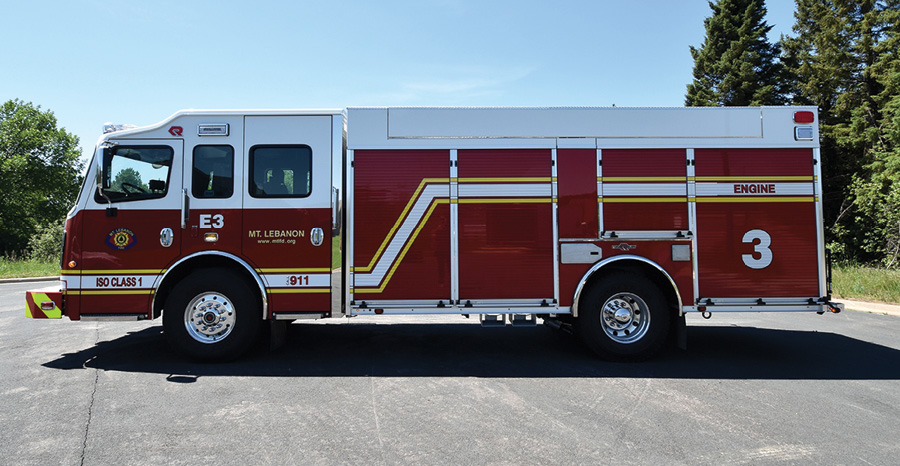 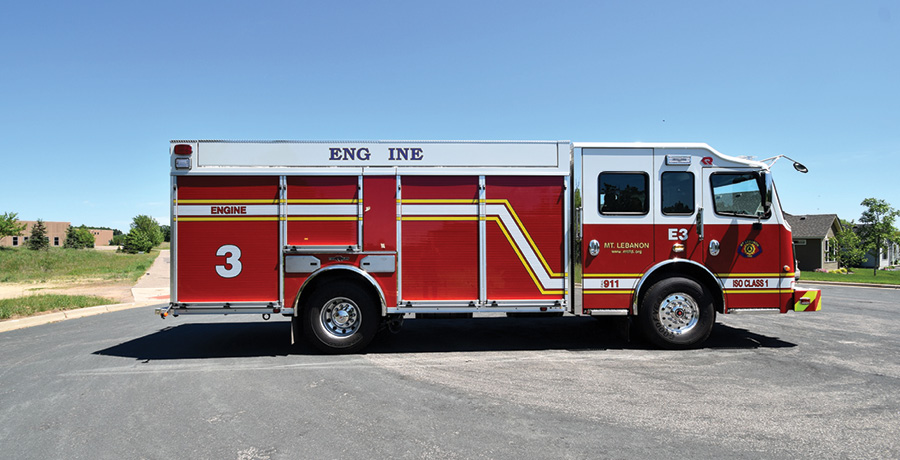 4 The pumper has all roll-up doors over compartments and carries a Harrison 10-kW hydraulic generator.

Rick Smith, sales manager for Kaza Fire Equipment LLC, who sold the rear-mount pumper to Mt. Lebanon, says the biggest challenges were the corrosion issues the department was having with its pumps and the very hilly terrain it has to traverse. “We solved the corrosion issue by installing a Rosenbauer N55 1,500-gallon-per-minute (gpm) rear-mount pump with a marine-grade bronze pump case,” Smith points out. “On the issue of hilly terrain, on the finished vehicle, we were able to give them a 13.2-degree angle of approach and a 12.5-degree angle of departure, well beyond what they required.”

The vehicle is powered by a Cummins 500-horsepower (hp) 12-liter ISX12 diesel engine and an Allison 4000 EVS automatic transmission. It has an overall length of 32 feet 10 inches, an overall height of 10 feet 2 inches, and a wheelbase of 193 inches.

Kurt Christofel, a lieutenant in Mt. Lebanon and member of the apparatus committee, says the committee wanted dual foam tanks on the new pumper, similar to those on other Mt. Lebanon pumpers and a quint. “Since 2002, we’ve been running twin foam tanks on our apparatus because we have quite a few gas stations and minimarts with gasoline in town along with a lot of truck tanker traffic,” Christofel says. “So, our new Rosenbauer pumper has a 15-gallon Class A foam tank and an 85-gallon Class B foam tank controlled by a FoamPro 2002 foam system.”

The pumper has three 1¾-inch preconnected crosslays in trays, one of 150 feet and two of 200 feet each, along with 200 feet of 2½-inch preconnected in a tray. At the rear of the pumper, the department runs a 200-foot leader line used for houses with setbacks and courtyards, so it can serve as a mobile standpipe, as well as 100 feet of three-inch hose headed by a Task Force Tips Blitzfire. “Preconnect height is a big thing on a rear-mount pumper,” says Christofel. “We were able to get our crosslays down in the L1 and R1 transverse compartments where someone 5 feet 2 inches or 6 feet 5 inches could easily handle them. We also have irons, other tools, and cones in the transverse compartments.”

The rear-mount’s hosebed, according to Ricciuti, carries 1,200 feet of five-inch large-diameter hose, 400 feet of three-inch hose, and 200 feet of 2½-inch hose. “This pumper has met all of our expectations,” Ricciuti says. “It’s similar to our 2002 pumper, and the main difference is the chassis height where the frame is higher, but that’s because we needed the steeper approach and departure angles.”

Ricciuti notes that the Rosenbauer rear-mount pumper has 11 self-contained breathing apparatus (SCBA) onboard. “There are five air packs in the cab and another six in compartments,” he says. “In addition, we have six spare cylinders on the pumper. We carry 3M Scott Safety 45-minute cylinders and allow a firefighter only one cylinder in a structure fire. After that, he goes to rehab and is reassigned to outside tasks. It’s the safety factor that we build into our operations.” 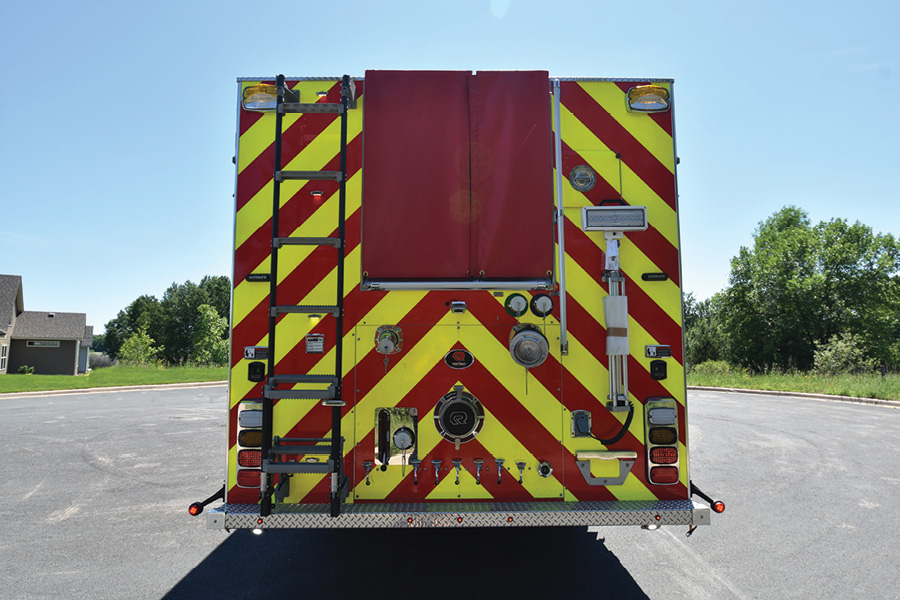 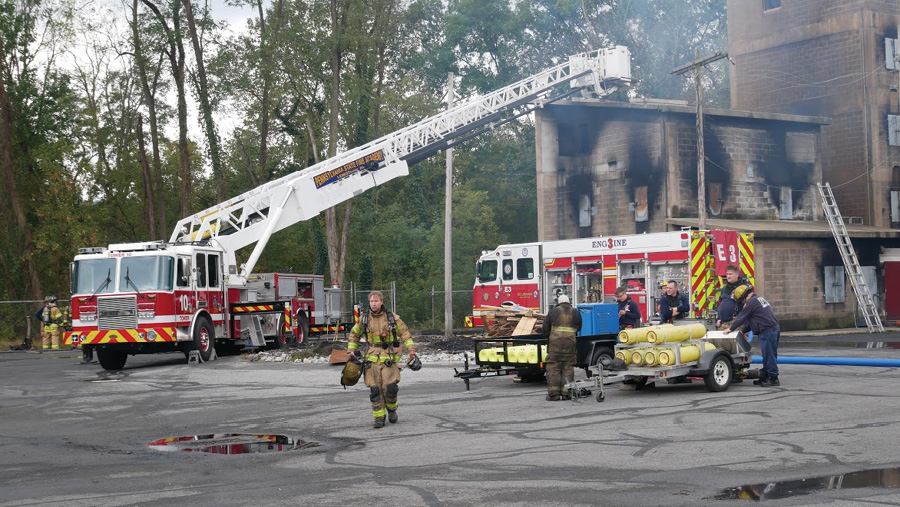 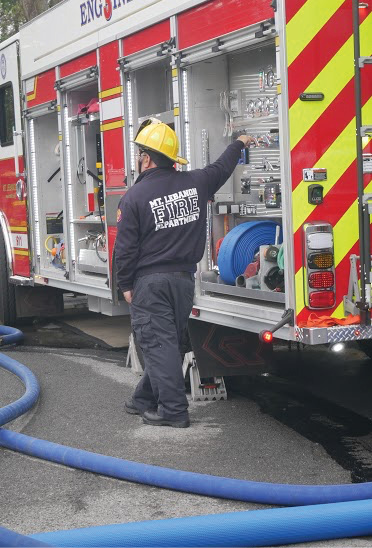 7 The pump panel is located in the end compartment on the driver’s side. 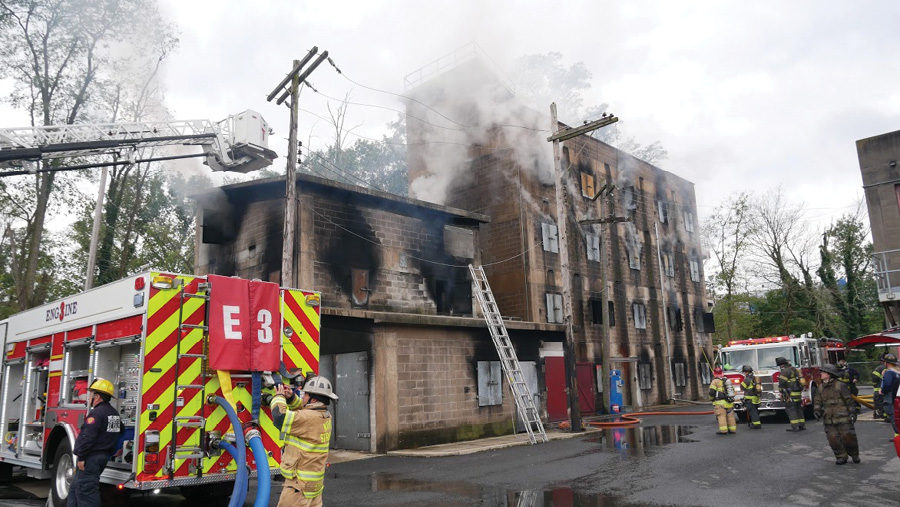 8 Another view of the pumper operating at a training facility.

Ricciuti adds that safety was a big factor on the rear-mount pumper. “We only put air packs, thermal imaging cameras, and hand lights in the cab of the vehicle,” he says. “Everything else is outside in compartments. For example, the L3 lower shelf holds all our emergency medical services equipment, and the shelf above it has a rapid intervention team (RIT) pack and rope for RIT.”

“All three of Mt. Lebanon’s engines are equipped nearly identically,” says Ricciuti. They each also carry a Genesis battery operated combi tool as well as a Sawzall and cribbing. “This new engine is first out on all calls,” he adds, “and if it’s a motor vehicle accident or other type of rescue, our rescue truck rolls with all its rescue equipment, including a HURST hydraulic tri-pump, two HURST portable hydraulic pumps, a 28-inch spreader, a cutter, a combi tool, a manual spreader, and two fixed and two telescopic rams.”