What does a newly-formed fire district do to fill out the fleet it needs to serve the public? The Mt. Juliet (TN) Fire Department faced that problem and turned to Pierce Manufacturing for an answer, which came in the form of a contract for two PUC pumpers, a quint aerial ladder, and a quint aerial platform.

Mt. Juliet Fire Department contracted with Pierce on a lease-purchase agreement where it leases the four vehicles for the next 10 years and at the end of that time purchases them for $1 each. “Our annual payment for the four vehicles is $300,000,” says Erron Kinney, Mt. Juliet’s fire chief.

The Mt. Juliet (TN) Fire Department was established in 2013, organized in a suburb of Nashville that had experienced fast suburban growth. Kinney notes that because Mt. Juliet grew so fast, Wilson County was unable to keep pace. So, the city started its own fire department. The department has 12 full time firefighters and 28 volunteers working out of a single station.

The Pierce platform quint the department is leasing was a demo stock unit that underwent minor modifications for Mt. Juliet, while the aerial ladder quint and the two PUC pumpers were on the production line and received modifications to spec them the way Mt. Juliet required. 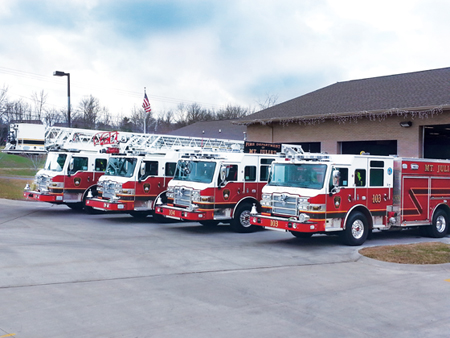 For pics of the new fleet, click above HERE.

Each pumper is built on an Impel chassis and carries a 1,500-gallon per minute PUC pump, a 750-gallon water tank, a 20-gallon foam tank, and a Husky foam system. Each is powered by a Cummins ISL9 diesel engine and an Allison 3000 EVS transmission on a 188½-inch wheelbase and has a Harrison hydraulic generator.

One quint features a 105-foot heavy duty ladder and the other 100-foot platform. Each quint has 2,000-gpm Waterous pump, 500-gallon water tank, 20-gallon foam tank, and Husky foam system. Both have Harrison hydraulic generators and are powered by Detroit DD-13 engines and Allison transmissions.

Wink Brown, the vice president of sales for Emergency Vehicle Specialists, who sold the apparatus to Mt. Juliet, says the two aerials were delivered first, followed by the pumpers a couple of months later. “I’ve been doing this for 26 years and never had a deal like this before,” Brown says. “It’s rare to sell an entire fleet at one time.”

Kinney points out that because the two quints were delivered first, they were the department’s first-due apparatus from when they went into service in September 2013 until the pumpers were delivered two months later. “Our platform also doubles as a rescue vehicle for us,” he says. “We’ve installed hydraulic tools on it, and it has the reach, accessibility and stability for rescue capabilities, should we need them.”

Kinney notes that Mt. Juliet runs automatic mutual aid on some types of calls with the neighboring Nashville (TN) Fire Department. “Our foam systems and our platform are the same as their apparatus and equipment,” he says, “so we’re comfortable working together.”

Multifunctional apparatus with maximum storage space were two of the key reasons why Mt. Juliet went with Pierce, Kinney observes. “They maximized the compartment space on the vehicles for us in order to provide for future growth,” he says. “We also liked the ergonomic design on the pumpers and aerials, especially with Pierce placing often-used equipment at waist or chest level, which was ideal. And, we kept everything consistent in terms of the pumps on all four apparatus.”

Pat Konz, stock sales coordinator at Pierce Manufacturing, said the changes to the demo platform and the rigs on the production line were no problem for Pierce. “Mt. Juliet added a foam tank and system on its aerial ladder, while the platform already had those systems,” she says. “They had the same foam systems put on their PUC pumpers that were still on the line.”

Chief Kinney points out that the Mt. Juliet firefighters are fond of the rigs. “Everyone loves the vehicles,” he says. “We wanted the most user-friendly trucks that we could get and went to Pierce because they embody that tradition in the fire service. It has a name for quality, tradition and reliability.”

Rosenbauer’s Harold Boer Talks about Apparatus and the Fire Service