There are times when it is nearly impossible to get large amounts of water close to a fire scene from a water source, and it may be necessary to move it long distances. 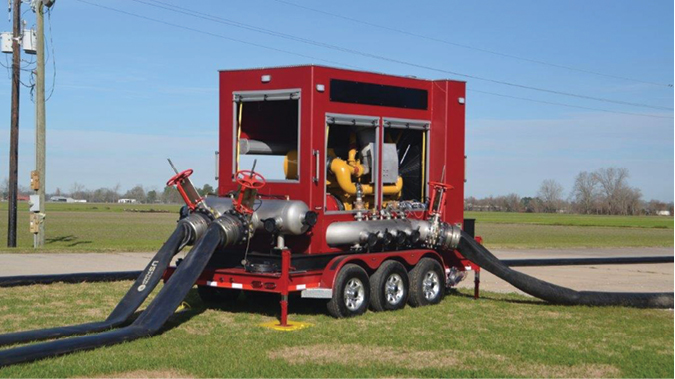 1 US Fire Pump makes a trailer-mounted stainless steel pump that will flow 6,250 gpm. (Photos 1-3 courtesy of US Fire Pump.)

Chris Ferrara, president and chief executive officer of US Fire Pump, says a lot of fire departments using water shuttles and portable water tanks for large fires might want to consider alternative means of moving big water. “We make the largest fire pump mounted on an apparatus that flows in excess of 6,000 gallons per minute (gpm),” Ferrara says, “and took the same concept and developed a portable application in a skid-mount-type unit that will flow 6,400 gpm at 150 pounds per square inch (psi) through 12-inch hose.” 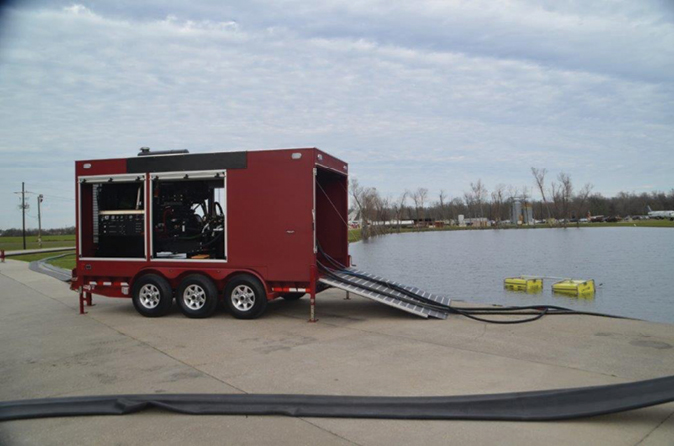 2 This submersible pump unit made by US Fire Pump can produce a flow of 10,000 gpm.

Ryan Nawrocki, US Fire Pump’s chief engineer, notes that the Skid Pump unit is fitted in a heavy-duty four-foot-by-four-foot carbon cage with lifting eyes and forklift holes. The unit is driven by an 800-horsepower Caterpillar engine. US Fire Pump also makes a Mobile Pump unit rated up to 6,250 gpm that’s carried on a six-wheel trailer. Nawrocki says that a Direct Injection Foam Skid for proportioning foam concentrate through a 300-gpm foam pump and a 12-inch discharge manifold can be coupled with a large pumping system to deliver foam from a safe distance from a hazard.

DependaPower pumps can be built on hook-loader skids or on a dual-axle trailer for greater mobility and to allow the pump to be easily detached for standalone operations. Williams uses a high-volume, low-pressure jet pump (venturi) situated a safe distance away from a hazard to introduce foam concentrate into a pumping system.

Mike Laskaris, chief engineer at Hale Products, says Hale’s most popular industrial pump is its 8FG model rated at 3,000 gpm. “The 8FG has a lot of reserve, so it can push out to 3,500 gpm and 4,000 gpm,” Laskaris says. “It’s a staple in the industrial fire apparatus market, and some municipal fire departments like to use it in their quints and midmount aerials because of its shape and how easily it fits the space on the aerial apparatus.” 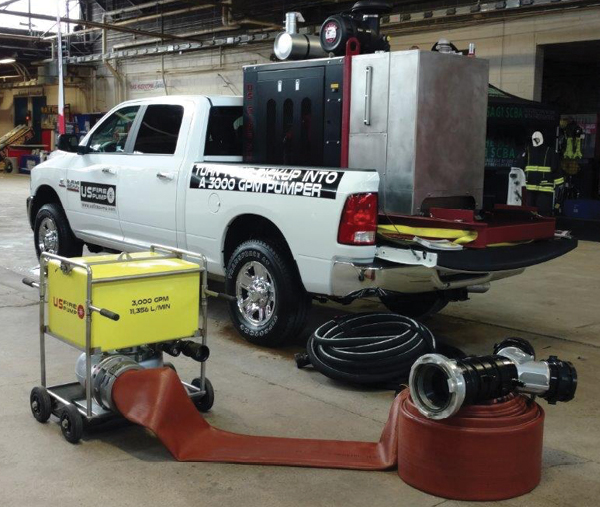 3 US Fire Pump makes a 3,000-gpm submersible pump that fits in the back of a ¾-ton pickup truck.

Gregg Geske, director of North American sales for Waterous, says his company makes the CRU-2 model pump with different transmissions so it can be mounted on fire apparatus, on a diesel-powered skid-based system, or on a trailer for remote work. “It’s very popular for industrial applications and can pump 3,500 gpm to 4,000 gpm,” Geske says. “From draft at 4,000 gpm we can add an inducer, which helps the water into the eye of the pump, aiding the negative pressure in the eye and pulling the water into the impeller, allowing us to get in excess of 6,800 gpm throughput.” 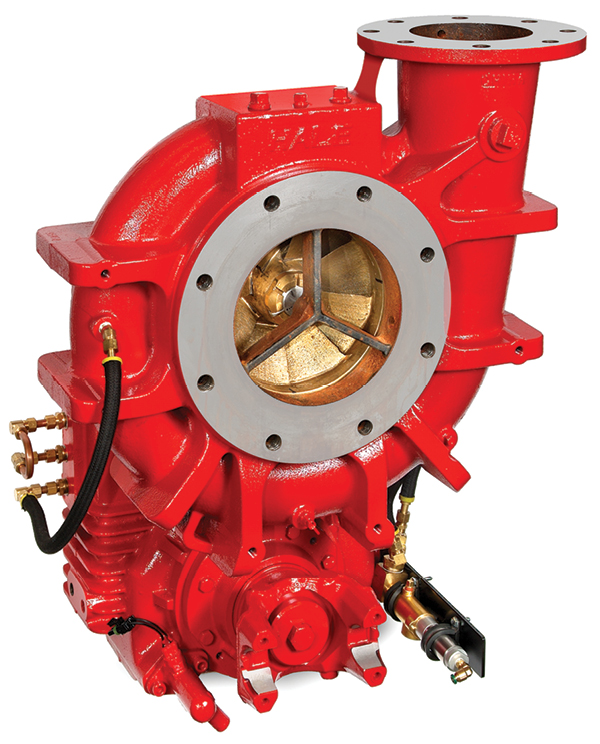 Kyle Darley, design engineer for W.S. Darley & Co.’s pump division, says Darley makes the 2ZS, a 6,000-gpm midship-driven pump that “uses a single transmission to power two impellers, each with its own volute and interior design that gives a smooth stream profile and more flow for less horsepower.” He notes the 2ZS gives less vibration on the apparatus and its drive train, “and the smooth water flow leads to monitors having a predictable pattern and also stressing the hoselines less.” Darley also makes a 3,000-gpm version of the 2ZS. 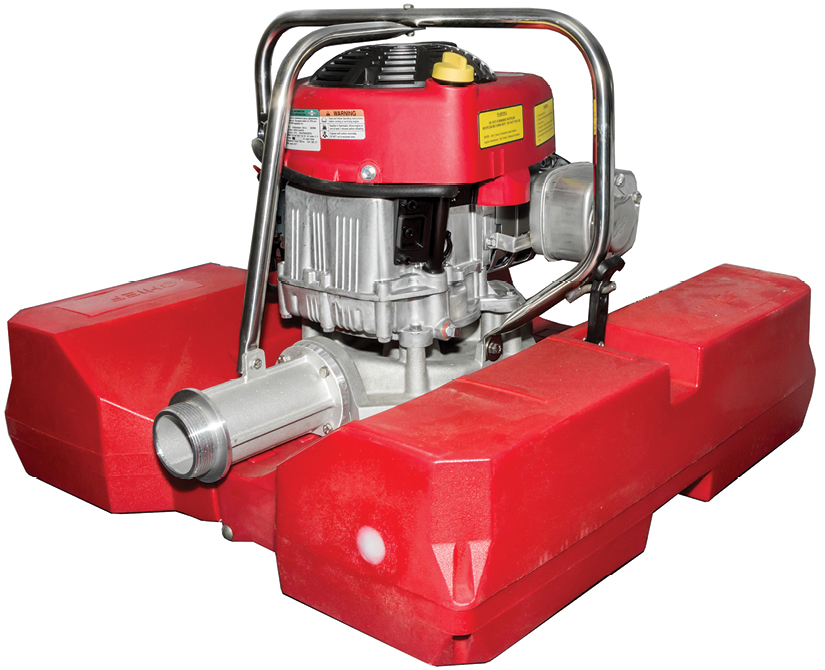 5 The Super Chief floating pump made by Hale Products can pump 420 gpm from a static water source.

US Fire Pump makes a Hydraulic Submersible pump on a six-wheel self-contained trailer that can deliver from 3,000- to 20,000-gpm, which Ferrara calls “ideal for emergency fire water supply and dewatering from natural disasters.” US Fire Pump also makes a Mini Submersible pump that fits in the back of a ¾-ton pickup truck and delivers 3,000 gpm from any body of water.

Williams Fire & Hazard Control makes the DependaPower submersible pump, driven by a diesel engine that will pump water at the rate of 8,000 gpm from a water source as far as 200 feet away with a vertical lift of 35 feet. LaVergne says the water flow then can be delivered to either an apparatus pump or a separate boost pump where pressure is increased before sending it to end-of-the-line devices. Williams also makes its submersible pump in 4,000- and 12,000-gpm models.

Laskaris says that some fire departments put two of Hale’s Super Chief floating pumps together to move big water. “The Super Chief only needs three inches of water and can pump 420 gpm from a static source,” he points out, “so some departments put them where a truck can’t get to in order to give them a significant water supply in a rural or interface area.” For wildland use, Laskaris says Hale makes the Fyre Flote, which puts out 20 to 70 gpm at up to 170 psi, allowing the pump to supply a wildland attack line or an uphill supply hoselay. 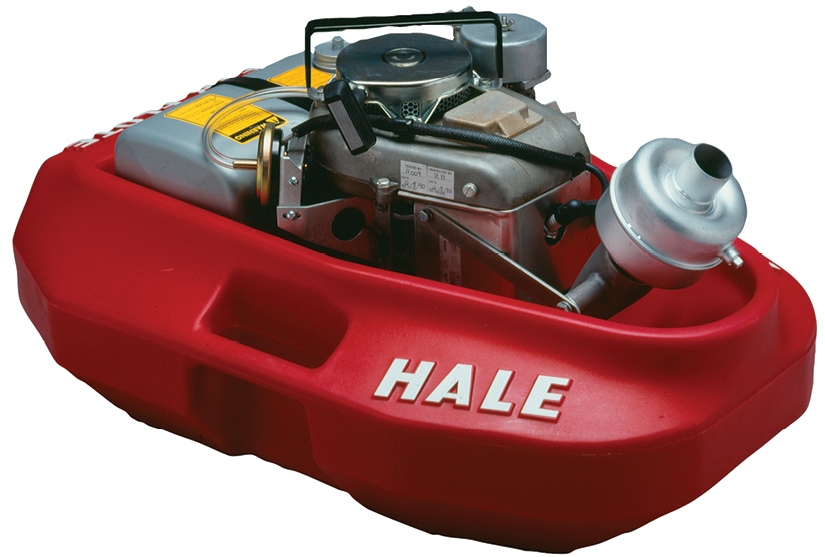 6 The Hale Fyre Flote is often used in wildland applications to supply an attack line or hoselay.

Jerry Halpin, vice president of sales and marketing for CET Fire Pumps, says, “All of a sudden, people are discovering floating pumps again, using them to access swimming pools, creeks, ponds, and rivers.” Halpin says CET’s floating pumps will move 50 to 600 gpm, depending on the model.

Besides CET’s PFP floating pump models, it also makes the Fire Pack Force 1, 2, and 3 skid-mounted portable pumps, powered by Honda engines, that easily fit on flatbeds, pickup trucks, trailers, and quick-attack vehicles. Powered by engines running from 20 to 100 hp, Halpin says the portable pumps will put out between 300 and 1,000 gpm. 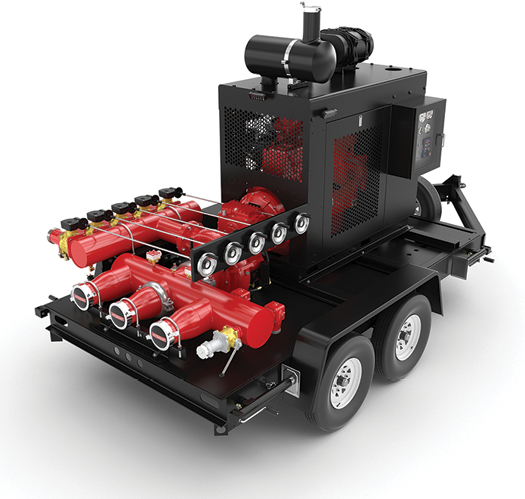 7 This Waterous CRU-2 model pump, which can flow 4,000 gpm, is diesel powered and mounted on a four-wheel trailer. (Photos 7 and 8 courtesy of Waterous.) 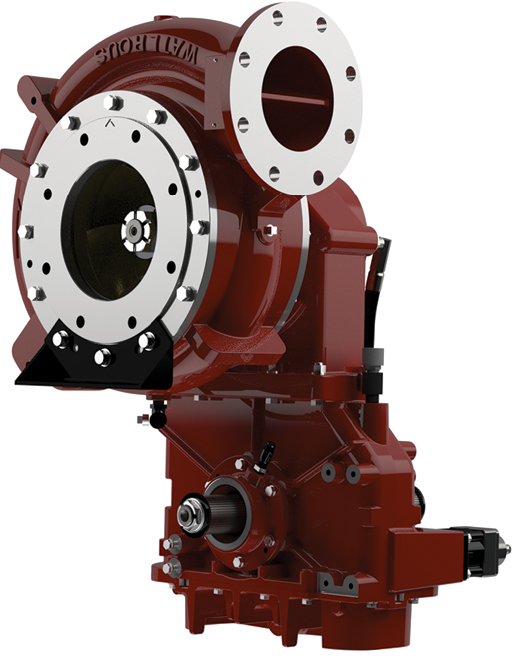 8 The Waterous CRU-2 pump can have an inducer added to it, which allows the unit to get in excess of 6,800 gpm throughput from draft.

Big Monitors and Other Equipment

Ferrara notes that his company makes a trailer-mounted deck gun that is available in 2,000- to 8,000-gpm models, which can be custom configured to meet a fire department’s particular needs. 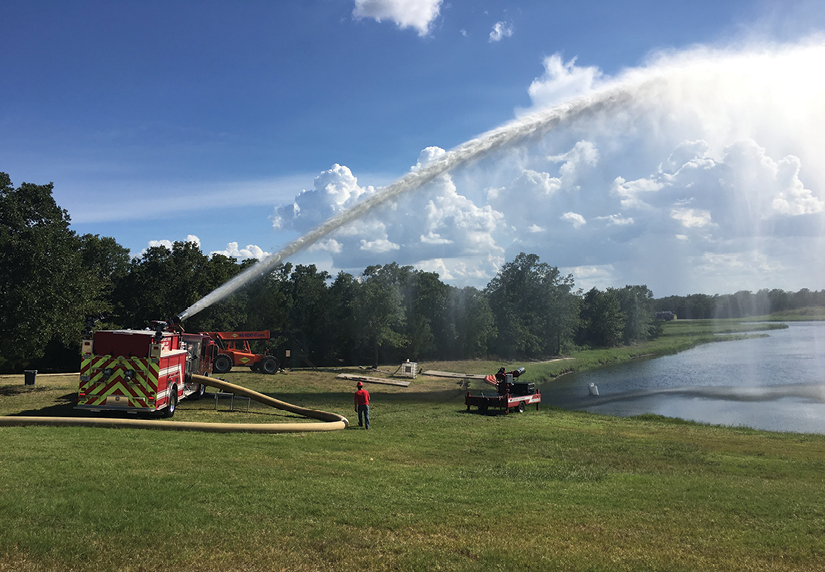 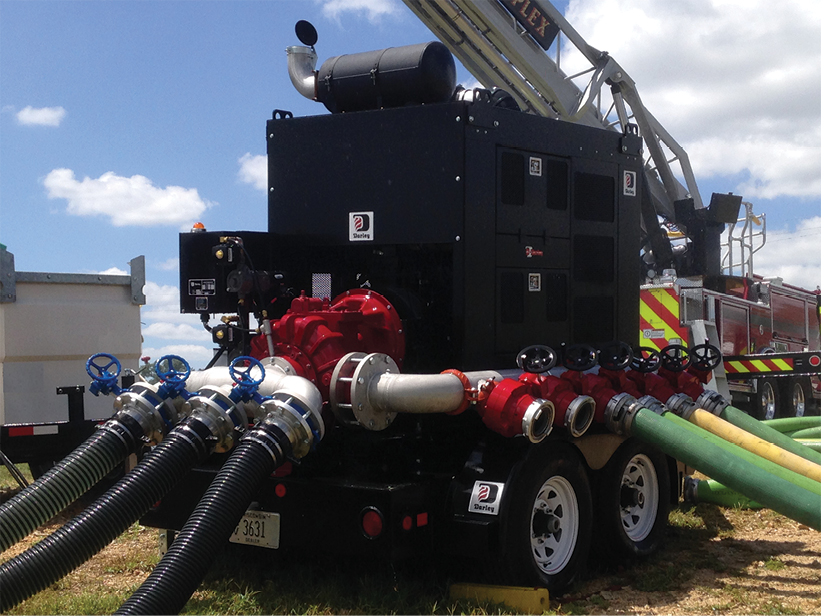 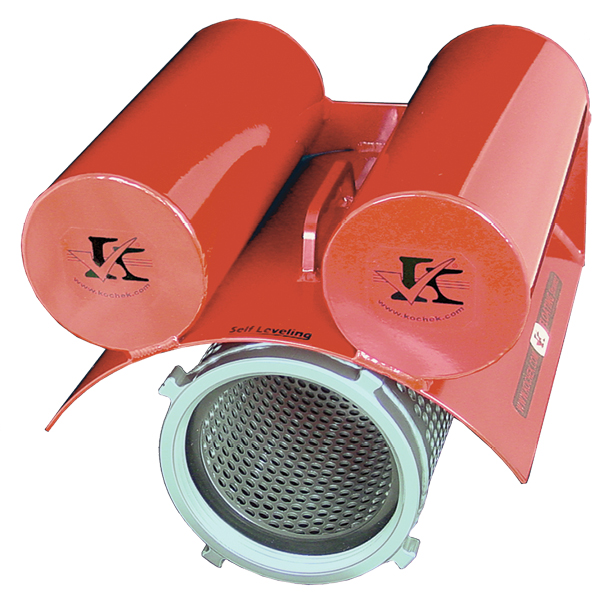 Lou Thomas, product specialist for Kochek Co., says Kochek makes a series of Big Water Strainers that increase the output of standard size strainers used in drafting. “A standard strainer is a low-level floating barrel strainer with six-inch tubing,” Thomas observes. “We use eight-inch tubing in our Big Water line, which doubles the flow from the strainer. The National Fire Protection Association requires a drafting engine to use two pieces of 10-foot suction hose at draft to get to 2,000 gpm, and with our Big Water Strainer, we can get up to 1,800 gpm out of a single 10-foot hard suction connection.” 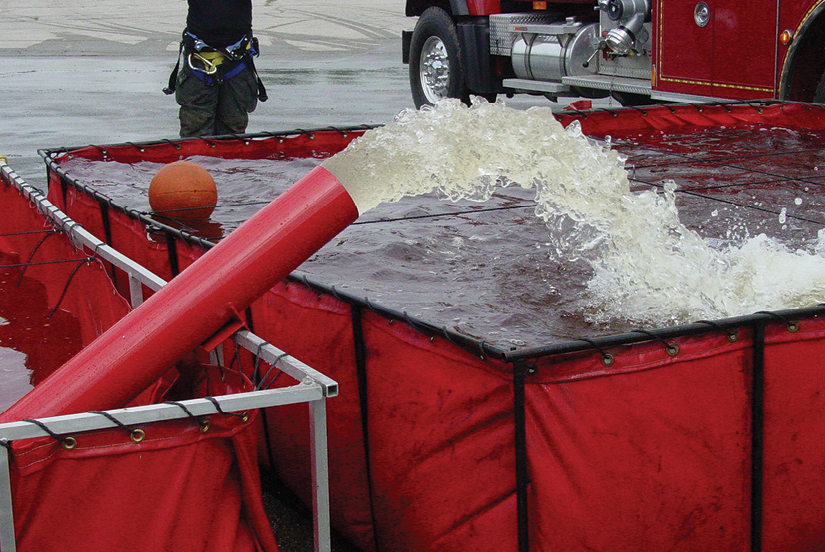 12 Kochek Company makes the Holley Transfer Device, an eight-inch-wide device that will move up to 1,300 gpm, shown transferring water between portable tanks.

Kochek also makes a Drafting Wye that fits over an engine’s six-inch intake that allows an operator to hook up two six-inch hard suction lines to the wye and each to a Big Water Strainer. “That way, they can get to 2,000 gpm or more from one side of the truck, which is a much easier setup than going off of both sides of the engine.” Kochek also makes the Holley Transfer Device in six- and eight-inch models. The device is a jet siphon that hooks to a suction hose and drapes over a portable water tank. The eight-inch model will move between 1,000 and 1,300 gpm, Thomas says. 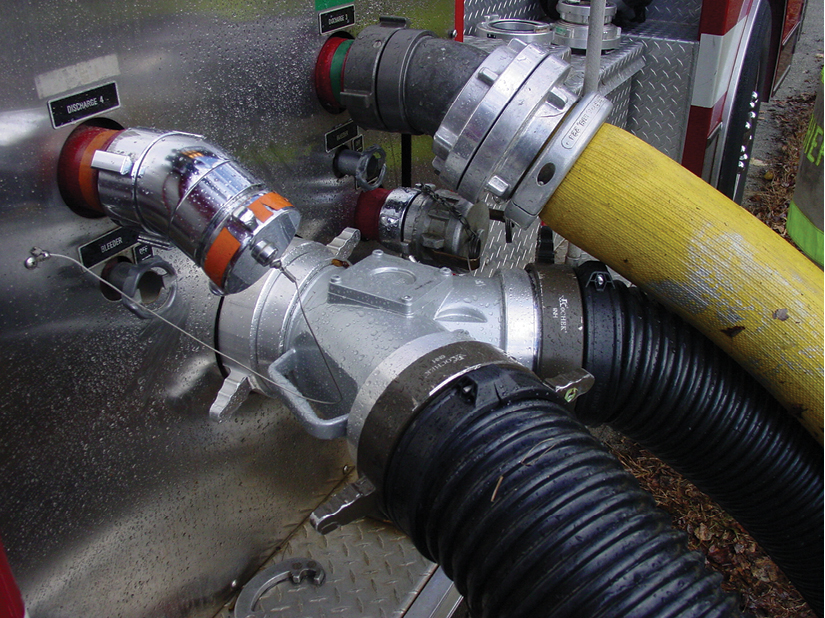 13 The Drafting Wye made by Kochek Company fits over an engine’s six-inch intake to allow the pump operator to hook up two six-inch hard suction lines to drafting strainers.

Henry Lovett, product manager for TurboDraft, says his company makes 2½-inch and five-inch TurboDraft versions. “It works on the same principle as a foam eductor where a negative venturi effect is created,” Lovett says. “You hook a 2½-inch hose to a pump discharge and then to the TurboDraft, which has a five-inch large-diameter hose (LDH) connected to it and the pumper’s six-inch intake. The operator charges the 2½-inch line from his water tank, and the TurboDraft eductor creates a negative pressure and sucks water from the pond and discharges it through the five-inch LDH to the pumper, establishing a water supply.” 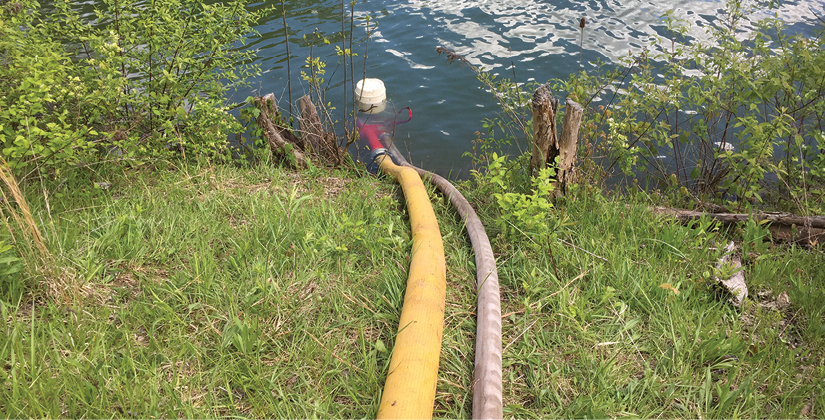 With minimal lift, Lovett says TurboDraft will produce 900 gpm, Lovett says, with 200 gpm subtracted for the 2½-inch discharge to leave a net gain of 700 gpm. “You can put two TurboDrafts in service and run double the amount of water with two five-inch LDH lines to the pumper,” he says.