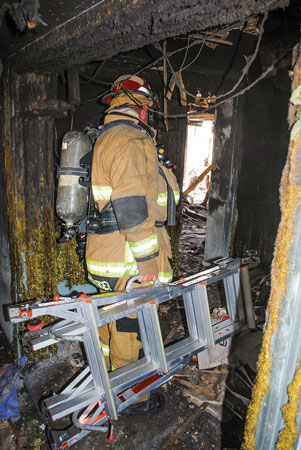 But, sometimes, those ladders don’t fit a situation where firefighters find themselves because of a tight space, inadequate room, hard-to-access ingress, uneven surfaces, or another type of issue. However, there are ladder types that go beyond the typical ladder complement to fit those situations.

Randy Vandersee, plant manager of Duo-Safety Ladder, says Duo-Safety makes two versions of an A-frame or combination ladder that work well in unusual circumstances. “Our 300A model works as an extension ladder where the fly slides up, as well as an A-frame ladder that has a spreader assembly similar to a step ladder,” Vandersee says. “This ladder is available in a six- to nine-foot length (six feet A-frame and nine feet extension), an eight- to 13-foot length, and a 10- to 15-foot length.”

Duo-Safety also makes the model 35B, a traditional jackknife-style combination ladder, Vandersee points out. “It’s often used to bridge a fence or wall,” he notes. “It folds in the center and comes in six- to 12-foot, seven- to 14-foot, and eight- to 16-foot lengths.”

Sam Cramer, chief executive officer at Alco-Lite, a product line made by Sam Carbis Solutions Group, says that Alco-Lite makes the CJL series ladder, which is a short extension and A-frame combination ladder. “We’ve made the CJL series for years, and it has traditionally sold well in the New York and Pennsylvania areas,” Cramer says. “It can be an A-frame or stepladder when needed or be reconfigured into an extension ladder in 10-, 12-, 14-, and 16-foot lengths. In the A-frame configuration, it runs from six to 10 feet high.”

Lyndon Walpole, vice president of governmental sales for Little Giant Ladder Systems, says Little Giant has developed two combination ladder models, the Overhaul and the Defender, built to comply with NFPA 1931, Standard for Manufacturer’s Design of Fire Department Ground Ladders, and NFPA 1932, Standard on Use, Maintenance, and Service Testing of In-Service Fire Department Ground Ladders. “The Overhaul is a multipurpose, triple combination ladder that can serve as an A-frame, a roof, or an attic ladder,” Walpole says. “This all-aluminum ladder has a built-in carrying handle that works well with gloved hands, has a large ratchet leg release, and a heavy-duty wheel kit.”

By including a ratchet leg system on the Overhaul, Walpole notes, “You don’t need blocking to make the ladder straight on a hillside or on uneven ground. You put your bunker boot on the ratchet pin and raise a side of the ladder so the ladder is in an even, stable position.” The Overhaul is available in four sizes of A-frame from four to eight feet, an adjustable extension ladder from nine to 15 feet long, and a roof ladder from nine to 15 feet long.

Little Giant’s Defender is built identical to the Overhaul, Walpole points out, in 17- and 22-foot-long sizes. “The 22-footer goes from 11 to 18 feet,” he says, “and can be used on the fireground but not as a rescue ladder. Both of our models are great to use on staircases in the A-frame position or for getting over a fence, wall, or other obstacle. And, you can easily walk into an elevator with either of these ladders or carry them up a staircase.”

Brent Sedlacek, senior product manager for extension ladders at Werner Company, says Werner makes the MT series aluminum multipurpose ladder that can function as either a straight ladder or an A-frame. Sedlacek says the ladder uses a telescoping design that allows the ladder to be adjusted to various heights for maximum versatility, curved rails for smooth climbing, and an extra-wide flared bottom with nonslip feet. The MT is available in 13-, 17-, 22-, and 26-foot lengths.

Vandersee says that one of the ladder designs requested by firefighters is a folding roof ladder. “As roofs get higher and with longer pitches, putting a longer roof ladder on the side of a pumper can be a problem,” he says. “We make a folding roof ladder that is 15 feet long folded, which opens like a jackknife to 30 feet, still with the typical roof hooks on it. This all-aluminum ladder comes in 10-, 12-, 14-, and 15-foot folded lengths.”

The double-ended version is Alco-Lite’s TRL pumper-style series in lengths from eight to 20 feet, while its double-ended DRL series, introduced this year, comes in 12-, 14-, 18-, and 20-foot lengths. “We’re also working on a folding roof ladder,” he adds. “We’re finishing testing, and it will be out sometime in 2016. It will be in the 14- to 20-foot range when in the open position.”

For the rear of fire vehicles, Werner makes the Sure-Step II access ladder, often used on aerials and rescue trucks. “The bottom two to four rungs (depending on the vehicle) fold up and pull away from the body,” Williamson notes, “to give the firefighter the correct climbing angle with steps that drop below the tailboard.”