The Mount Mourne (NC) Volunteer Fire Department (MMVFD) was interested in purchasing a new engine for its fleet. The older unit, according to Captain Matt Harrington, was underpowered and was starting to show its age.

Its brakes were not up to par, and the maintenance costs were getting higher as time went on. “The vehicle it would be replacing was not meeting our requirements for our ever-growing response area,” says Harrington. “The area we serve is stuck between urban and rural and was changing dramatically during the past several years. Strip malls, hotels, restaurants, and low-rise apartment buildings are the norm in the area now. There are also areas with farms. The area required a new style of apparatus to respond with. The majority of our area is nonhyrdranted, and we wanted at least a 750-gallon tank on the rig; 750 gallons of water is good for at least an initial attack, we decided.”

So about a year ago, the fire company formed a truck purchasing committee that was headed by one of its assistant chiefs and made sure everyone had a voice in the decision. “We had officers, drivers, and some members who were career firefighters in the area,” says Harrington. “We made sure all decisions made were by majority vote. We felt it was more diplomatic this way. It was also discussed why we needed certain items that were built on the vehicle and what hose and equipment should be carried. The committee decided that the cab and chassis should be sole-source and looked at several new deliveries in the area.”

The fire company went out to bid, and three manufacturers responded. “Because of the way we are set up, we didn’t have to go with a low bidder,” adds Harrington. “Seagrave was our choice because of meeting our specs and having good quality, we thought.” 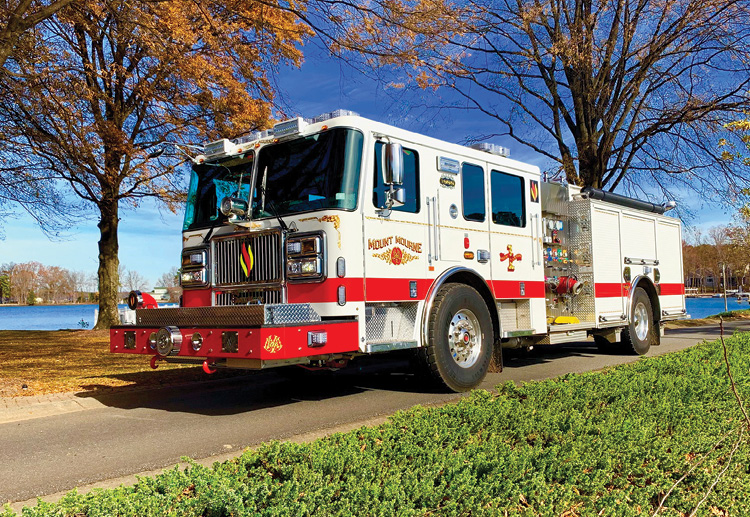 Designing the vehicle was something the fire company took pride in. A low hosebed so firefighters could pull hose without standing on the tailboard was an important safety consideration. “One of the biggest changes we incorporated was that we don’t have an onboard generator on this pumper,” Harrington comments. “And, we found we didn’t have to make any sacrifices without it. We have all LED lights for emergency vehicle lighting and scene lights, which draw less power but provide higher lumens. Scene lighting was improved with two front brow lights, one on each side, and one in the rear. We didn’t want to go with a light mast, even though we respond on Interstate 77 for motor vehicle accidents. We have more than enough lighting with this setup.” There are also battery-powered fans and HURST Jaws of Life eDRAULIC cutters and spreaders. And, the pumper has an inverter built in with a shoreline that charges the vehicle at the station. 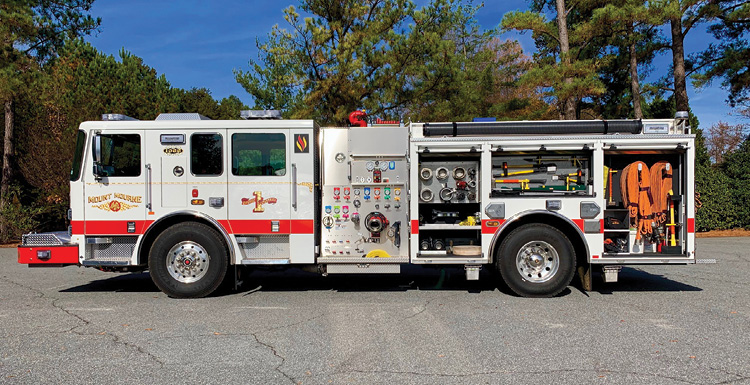 2 The driver’s side of the pumper. It has a simple pump panel layout, a booster line, and a deck gun on top. It carries normal engine company fittings, forcible entry tools, flex hose on top, and 1¾-inch hose packs. 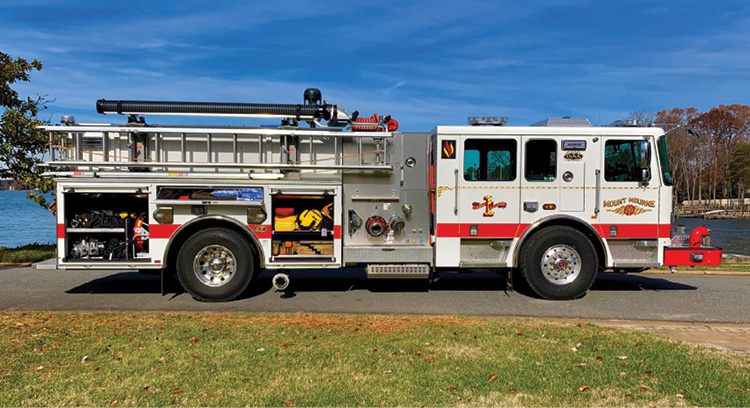 3  The officer’s side with portable fans and lighting, shoring material, tarps, flex hose with strainer, and portable ladder rack.

The new rig has a Jacobs brake for the engine and auxiliary braking for the transmission. Harrington says, “This gives us more braking power, saves us on brake maintenance, and promotes safety as well. The stopping power is really impressive. The cost was a little more up front but worth it in the long run.” Also, Harrington says, all of the equipment is compatible with the department’s neighboring departments.

“One of our biggest concerns now with firefighter cancer is that we have a cab that is easy to wash and decontaminate, including the seats, to promote cancer prevention,” Harrington says. “The exterior of the vehicle is coated with a ceramic coating, which makes it also easy to clean, and we spend less time waxing it. Seagrave provides a 10-year warranty on this item also.”

Some of the other improvements over its old engine that the fire company incorporated include a 30-inch extended front bumper, which contains extrication tools and saves equipment and compartment space, and a 100-foot length of 1¾-inch trash line in the front bumper.

Aside from regular engine company tools and accessories, the truck also carries forcible entry tools, fans, and a portable ladder rack on the officer’s side of the truck. The rack makes it easily accessible for firefighters. It comes down in about 13 seconds. “With what we carry, we can start basic truck company evolutions if needed,” says Harrington.

“Seagrave and the Seagrave-owned local dealer were great to work with,” Harrington continues. “We were able to work with the local dealer to mount all of our tools and equipment before the pumper went into service. They also provided training on the operation of the vehicle. Service after the sale was great.” 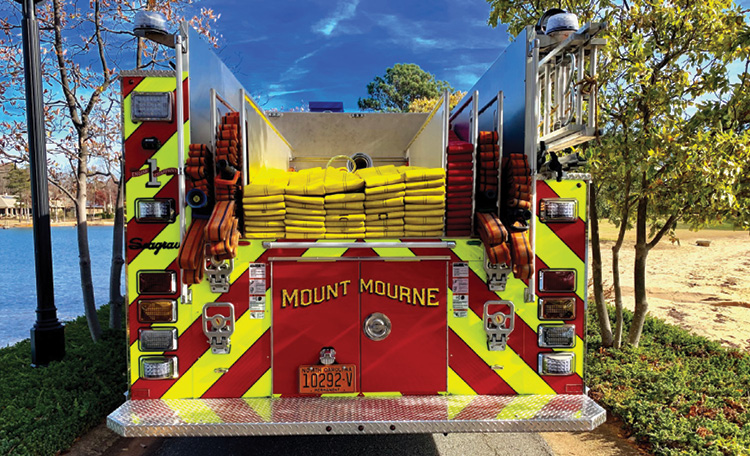 The MMVFD seems to have everything covered with this new purchase. It planned accordingly for the present and future. It improved on this new design, taking into account water supply, braking, and maintenance costs. It also took into account its mutual aid companies and made sure the equipment was compatible so it would make operations at a fire scene easy for all involved. The best thing you can do with any future apparatus purchase, if your budget allows, is to think outside the box and be proactive. Both of these were accomplished by the MMVFD.