“Apparatus and fire equipment are funded and provided by the Town of Hempstead, so we are pretty lucky when it comes to our budget,” explains Phil Sarubbi, ex commissioner and chairman of the apparatus purchasing committee (APC). “Merrick Truck Company #1 was comprised of a heavy rescue and a platform. We provide the ladder company and rescue work for the community, while the other two companies provide the engines. Our present vehicles were getting older, and we try to replace our rescues every 20 years as well as the truck. However, this time, based on needs, we went 30 years on the heavy rescue and 28 years on the truck.”

Planning for replacing both rigs started around three years ago. The APC looked at various manufacturers and makes and models and decided to do away with the heavy rescue in favor of two ladders. “The rear mount would take the place of our heavy rescue and have a great deal of rescue tools as well as air bags and shoring material. The ladder would respond on all MVAs and residential structure fires, and the Aerialscope would replace our platform and respond on all commercial structure fires,” Sarubbi adds.

“The operation of both vehicles was something we were impressed with. They both set up really fast and are easy to operate. We liked the self-leveling feature on the Aerialscope as well as the joystick control, which was something we didn’t have on our older platform,” Sarubbi says. 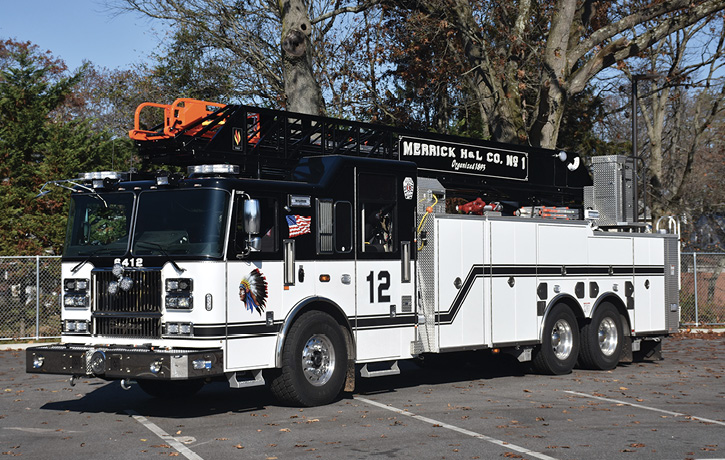 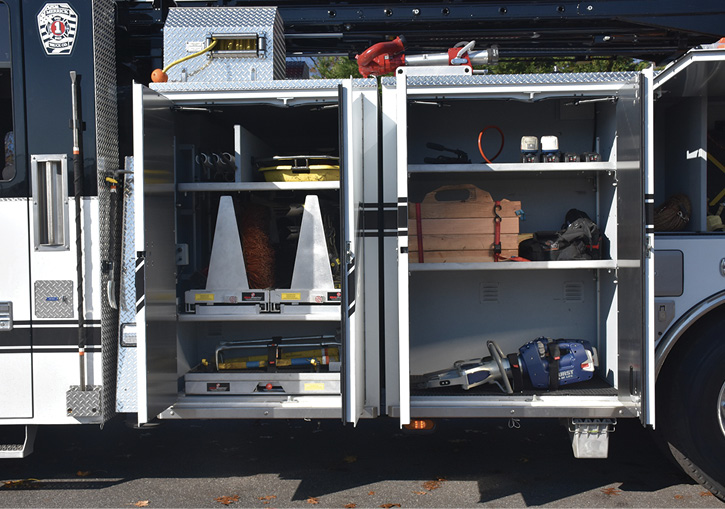 “Both trucks would also have vehicle extrication equipment onboard so we could actually interchange. Seagrave brought over a demo to our firehouse for both type of rigs and we liked what we saw as far as quality, sturdiness, and overall construction. Our members decided they didn’t want any plastic in the cab and wanted the cab to be able to be easily cleaned out when necessary,” Sarubbi continues.

As an independent fire company, Merrick could choose the manufacturer it wanted without going out to bid, so it chose Seagrave. “The use of the highly popular HGAC program reduced a great deal of time and made the whole process easier for us,” Sarubbi adds. “It was great dealing with the factory itself and the local dealer on Long Island, RVI. Our APC did a prebuild conference with RVI and saw the process of both builds by video because of the pandemic. The final inspection was a three-hour live video where we, along with the Seagrave engineers and RVI, went over both vehicles and checked through the specs. We had some minor changes to make on our part; other than that, both builds went well.”

“Some differences in operation for us were that we never had a straight ladder, so there was a little bit of a learning curve for our members as far as jacking and placement. The members also had to learn the operation of the Aerialscope, since our platform was a rear mount with the bucket overhanging the cab. The self-leveling feature proved to be a gain for our company in reduced setup time for the new vehicle. Compartment space was virtually the same, with some less space on the tower. However, with the placement of the tools by RVI, it gave us better use of the space for overall operation,” Sarubbi says.

Merrick Truck Company #1 did a great deal of planning in purchasing two different types of aerials at the same time. Designing a rear-mount aerial to take the place of an existing heavy rescue was no easy task. The APC designed compartment space to hold the normal complement of truck company tools as well as auto extrication and rescue company tools. Training the members in the operation of these two unique trucks was also an accomplishment. 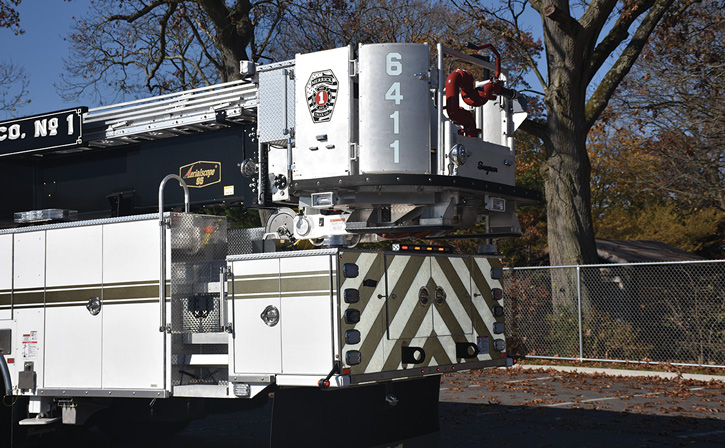 5 Rear access to the bucket and a manually controlled deluge gun.

6 Driver’s side compartments on the tower also have eDraulic cutters and spreaders as well as air bags and will carry forcible entry tools, fans, and a normal complement of truck company tools when fully loaded.

Remember, any purchase you make now needs to last for at least 20-plus years or, in some cases, you can replace it sooner if your budget permits. Planning for any kind of apparatus purchase in these times of staffing shortages is different than years ago. You need to consider cost, downsizing, and whether you have adequate staffing to operate what you purchase.