Fire apparatus makers have introduced a number of new and redesigned models of aerial ladders and platforms with the aim of improving the ease of use and safety of their rigs as well as wringing out a little extra working length on the aerials.

Rosenbauer has introduced a new aerial model to its aerial vehicle lines, the new King Cobra. Dave Reichman, Rosenbauer’s national sales manager, says the King Cobra is part of the Cobra platform line and is a 100-foot model that changes the fly section, the last eight feet of the aerial, to an articulated fly. “The articulated fly on the King Cobra is similar to that used on our telescopic box boom design on the T-Rex,” Reichman says.

1 Rosenbauer has introduced the 101-foot King Cobra aerial ladder platform that has the last eight feet of the aerial set up as an articulated fly section. (Photo courtesy of Rosenbauer.)

There are several benefits to using an articulated aerial, Reichman points out. “There are a lot more commercial and retail buildings with big parapets, and the articulated fly allows firefighters to get over them easily,” Reichman says. “The articulated fly also can be used for below-grade water rescues. In addition, articulation allows the operator to set the platform on the ground at any place around the truck, even the front, and allows for working in tight alleys and streets for both rescue and fire suppression activities.”

Tim Smits, senior sales manager for aerial products at Pierce Manufacturing Inc., says Pierce’s newest ladders are the Ascendant® series aerial models, which put a 107-foot aerial on a single-rear-axle chassis. “The Ascendant series offers lighter weight coupled with higher performance as well as a lower cost of ownership,” Smits says. “There also are the benefits of getting better performance out of the drivetrain and engine and better stopping distances.” 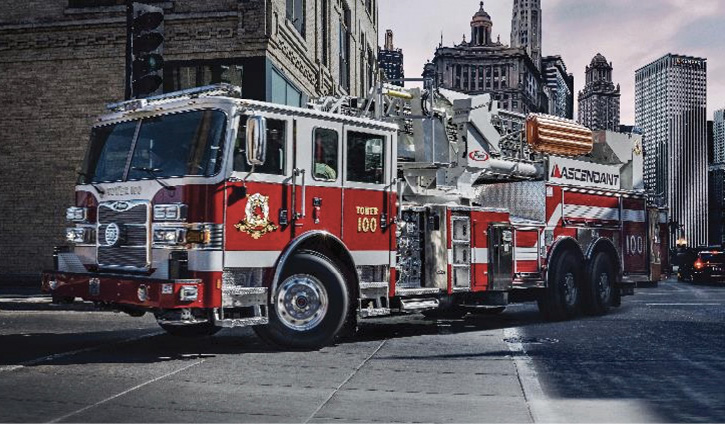 The 103-foot Tuff Truck AerialCat™ is KME’s newest aerial product, says Pete Hoherchak, KME’s product manager of aerials. “It’s a rear-mount ladder on a tandem rear axle that has a shortened torque box but with a body that can still package a large ground ladder complement, including two 35-foot two-section extension ladders,” Hoherchak says. “There’s a large amount of compartmentation, especially for positive-pressure ventilation fans, and it can carry up to 650 gallons of water.” 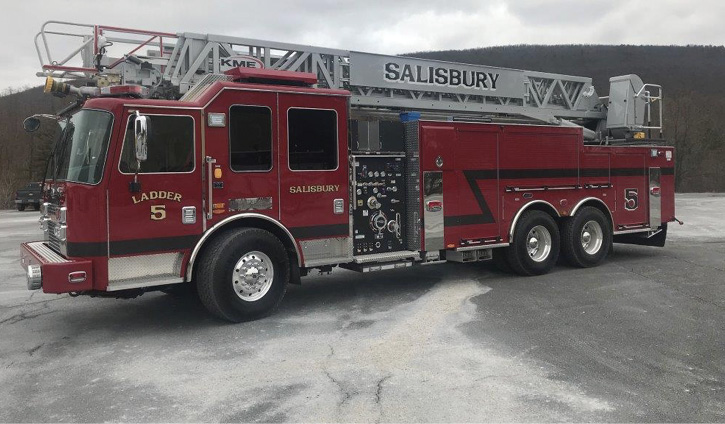 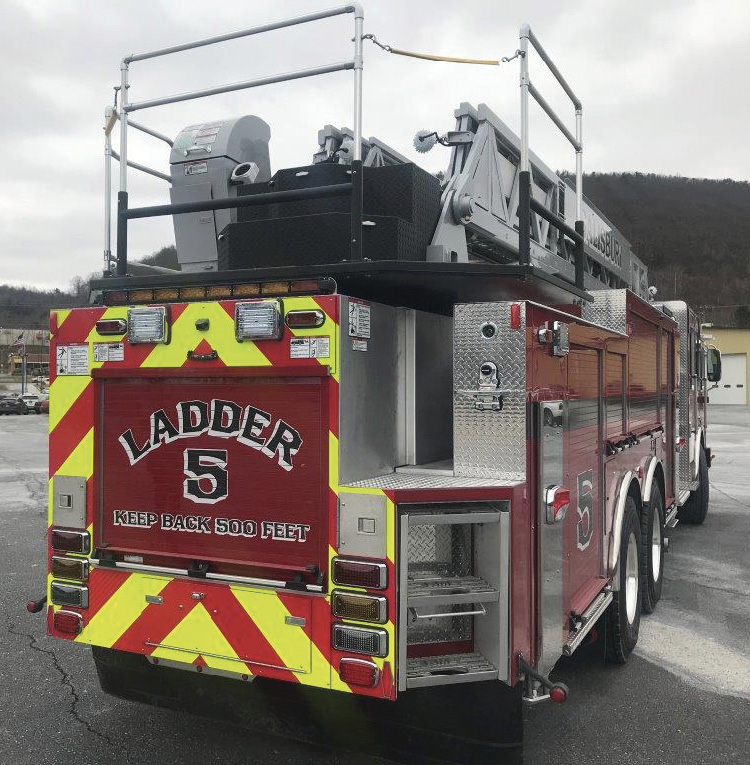 5 The back corners on the rear of the Tuff Truck’s body are mitered on 45o angles, which removed nine inches off the back corner radius, allowing less swing on turns.

Hoherchak notes the Tuff Truck AerialCat can operate from -7o to +80o elevation and has a stabilizer stance of 12 feet that allows it to be set up in tight and narrow streets with no restrictions as to its stability. “The capability of going to 80-degree elevation allows the aerial to be rotated within the footprint of the truck,” he observes. “The cab and body are 96 inches wide, which we narrowed to allow the truck to get down tight streets and yet carry any pump and engine on the chassis. In addition, the back corners of the body are mitered on 45o angles, which took nine inches off the back corner radius, allowing less swing on turns.”

The SkyFlow is the latest aerial product from Ferrara Fire Apparatus, a midmount four-section aerial ladder that’s designed for high-flow applications like those in industrial settings, says Paul Christiansen, Ferrara’s aerial sales manager. “The SkyFlow can pump in excess of 5,000 gpm at a 100-foot elevation,” Christiansen says, “using a U.S. Fire Pump HVP high-volume pump and a Williams Fire and Hazard monitor at the tip.”

Ferrara also made some redesigns to its R series aerials, incorporating multiplex controls into the aerials in place of the hard-wired hydraulic controls it uses on its S series aerials. “We make them in 79-, 103-, 109-, and 123-foot aerial ladder designs and also in a 102-foot rear-mount platform,” Christiansen notes. “And, we are able to incorporate our MVP design into the 109-foot aerial ladder, for those departments that choose that design.”

David Rider, director of aerial and industrial products for HME Ahrens-Fox, says his company’s newest aerial is the Ahrens-Fox AF104P, a 104-foot rear-mount platform that has a galvanized torque box, outrigger legs, and chassis. “We are trying to use stainless steel wherever possible on our aerials,” he says. “We incorporate envelope control as a standard feature on the AF104P where you can work over the short jack side with limitations on weight and reach, depending on what the envelope control allows for safety.” 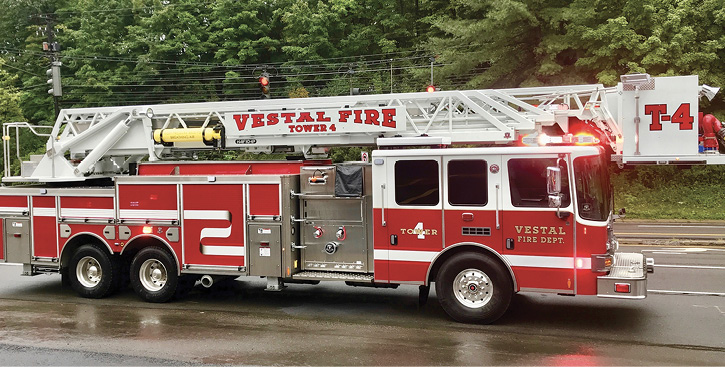 The AF104P’s outriggers are technologically smart, Rider says, allowing for precise placement, and the entire aerial is wireless. “There’s an operator’s station on the turntable, another in the bucket, and also on a handheld iPad,” he observes. “This aerial was 3D modeled and built as a new design from scratch, and it’s fully multiplexed.”

One of E-ONE’s newest aerial products is its HR 100 single-axle quint. The unit features a welded extruded aluminum aerial ladder with 100-foot vertical reach, 85-foot horizontal reach, and crisscross under-slung outriggers with 11-foot spread. The ladder has a 750-pound tip load (500-pound while flowing) and pinnable waterway piped to the tip with optional extended range of motion. The aerial ladder, integral torque box chassis, and outriggers feature a 2.5:1 structural safety factor. The aerial features E-ONE’s Advanced Aerial Control System (AACS) with a 3.2- or seven-inch full-color display. The extruded aluminum body has a SideStacker hosebed and up to a 500-gallon tank. Its midship water pump is available with up to a 2,000-gpm flow rating. 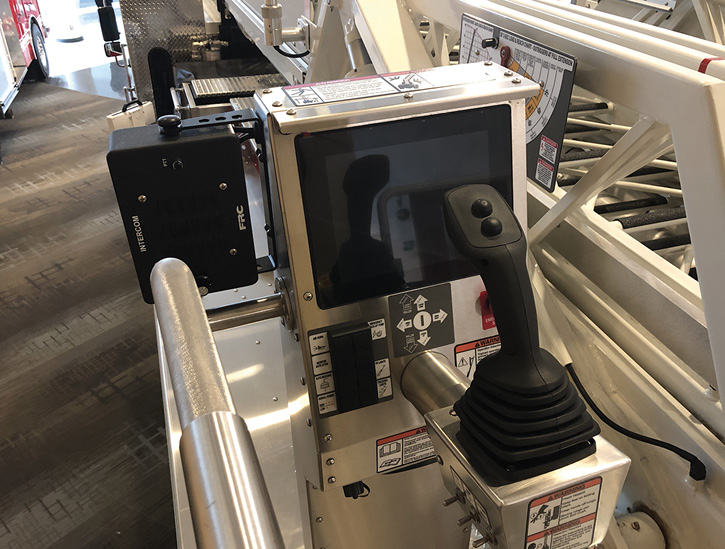 8 The aerial control position at the turntable on the AF104P aerial platform.

The HR 100 is also available in tandem-rear-axle configurations both as a quint and truck company model (no pump or tank). The tandem axle features a 500-pound tip load (wet or dry) and crisscross under–slung outriggers with a 12-foot spread. Horizontal reach of the tandem models is 92 feet.

The HR 100 is also available as a single-rear-axle unit with no pump or tank. The outriggers on this model have an 11-foot spread, and the horizontal reach is 92 feet. Like the tandem models, the tip load is 500 pounds (wet or dry).

According to Joe Hedges, E-ONE’s product manager for chassis and aerials, the company has also introduced a 100-foot aluminum HP100 platform that can operate at -10o for enhanced below-grade capability. Other enhancements to the HP100 line, which includes the HP100 rear-mount platform and HPS100 steel rear-mount platform, include the use of crisscross under–slung jacks featuring a 15-foot 6-inch spread, the ability to short jack the truck, and an auto-level system that uses either a wireless remote or tethered remote.

E-ONE is also introducing its new steel HPS100 Midmount. It is a five-section midmount platform with a 2.5:1 safety factor and -12o operation. Its vertical reach is 100 feet, while its horizontal reach is 95 feet. The aerial extension system features a roller system like on other E-ONE steel aerial products that does not require grease. Hedges says the new aerial also features ample compartment storage. “One of the main things we wanted to do with the truck is provide tremendous compartmentation and storage,” he says, “providing a 300-gallon water tank, hosebed, long ground ladders, but then still have plenty of compartments.” Hedges adds that the aerial has a full turntable that provides working space for firefighters and will feature E-ONE’s AACS as well. The platform has a 1,000-pound live load rating and 305-pound equipment load rating. It has single or dual monitors, and a full perimeter step is available. It can flow up to 2,000 gpm.

The HPS100 Midmount also features two crisscross under-slung outriggers behind the cab with an 18-foot spread and H-style outriggers at the rear with an 11-foot 7-inch spread. “A lot of times the extending beams of H-style jacks are next to each other,” Hedges says. “So, they take up a lot of space in the body. On the new HPS 100 Midmount, they are directly in line with each other. So, there’s one cylinder in the middle that pushes each of them out of a common structure. We’ve positioned it right behind the wheel well to optimize the compartmentation behind it.” 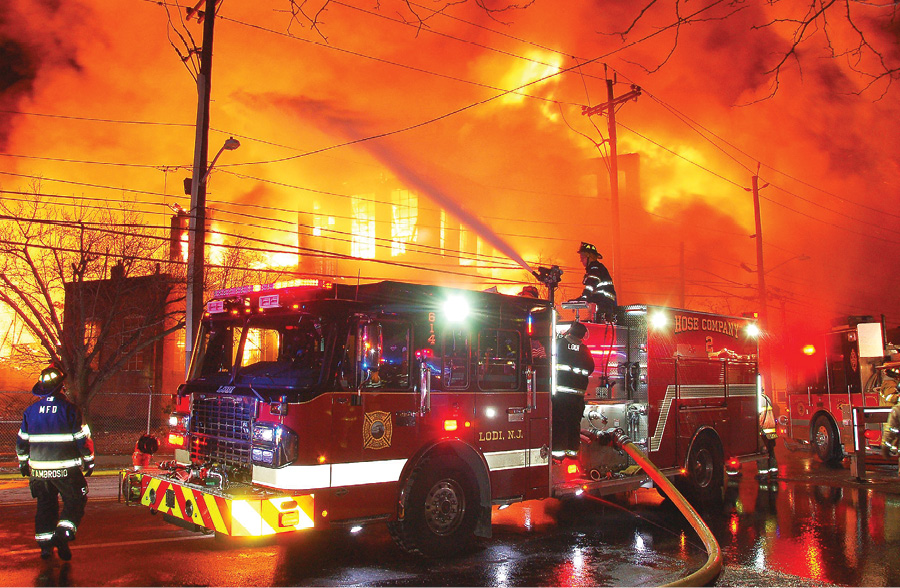 With temperatures in the single digits and a brisk wind, flames quickly spread throughout the Marcal Paper Products Company in Elmwood Park, New Jersey. Command made the decision to go to a defensive operation. Engine 614 of Hose Company 2 of the Lodi (NJ) Fire Department, a 2016 Spartan ER with a 2,000-gallon-per-minute pump and a 1,000-gallon booster tank, went to work with its deck gun. The fire destroyed most of the complex, leaving more than 200 people jobless, but caused no serious injuries. (Photo by Bill Tompkins, www.BTFirephotos.com.)