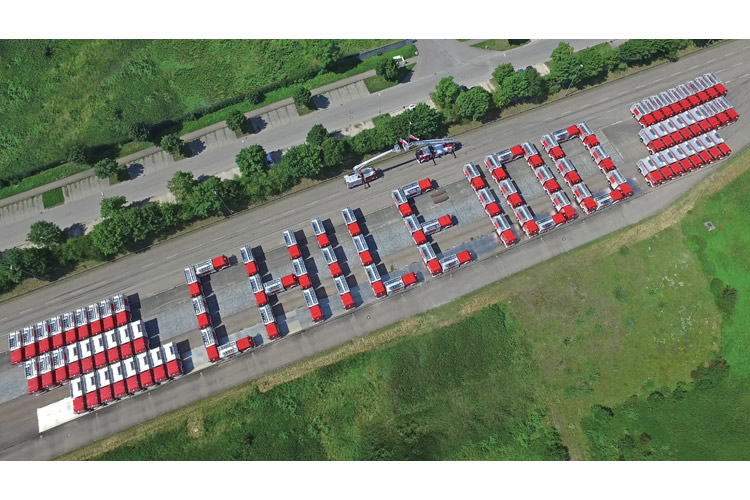 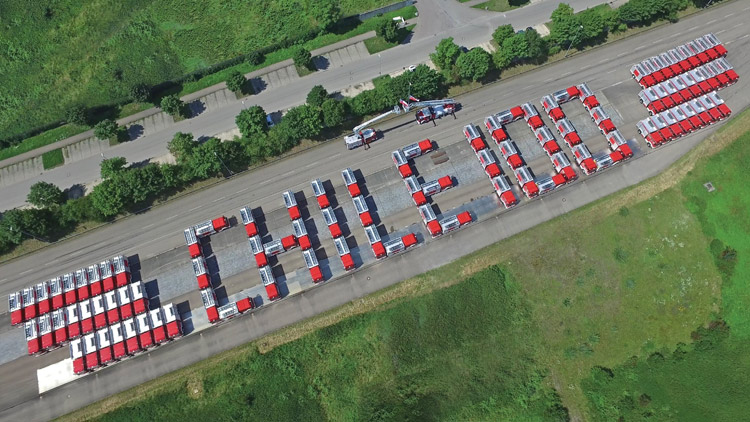 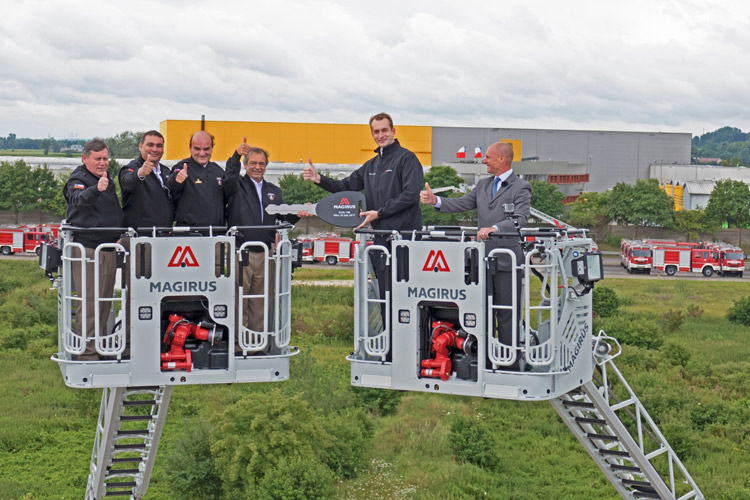 High-ranking representatives of the Junta accepted all the vehicles at a presentation held at the Magirus headquarters in Ulm, Germany. The tank pumpers were especially positioned on the test site of the Magirus Excellence Center for the customer’s review. A symbolic key handover to the representatives of the Chilean Fire Department was presided over by Magirus CEO Marc Diening. This handover was most certainly out of the ordinary as it took place 30 meters above ground. Using two Magirus M42L-AS articulated turntable ladders, the delegation was able to view all of the vehicles from a bird’s eye view. While up in the air, the delegation received a special firefighter salutation of well wishes: “Have a good trip and return safely from all your future missions.”

All of the 100 Magirus fire engines were built exclusively on IVECO Eurocargo chassis and have 220-kW (299-hp) engines. Thanks to an all-steel crew cabin, the C4 Semiurbano is designed for a fire brigade team of 1+8. Of the total 71 units, 55 were ordered with the well-established 160E30 model in the 4×2 variant. The 16 twin-tire all-wheel 150E30W fire engines ensure better driving in rough terrain. The large, external water tank has a capacity of 4,000 litres. All vehicles have a Magirus MPN230 centrifugal pump with a capacity of 3,000 litres per minute with 10 bar.

“Magirus offers us a very flexible vehicle and superstructure concept that is suitable for operations on motorways and in rural or urban areas,” commented JNBC Vice President Raúl Morales, adding,  “The agile fire engine covers so many operational areas and reliably replenishes extinguishing water whenever necessary.”

In the past, Chile’s national fire department has had to fight forest fires that were immense in scale. At the beginning of this year, fire destroyed an area of over 370,000 hectares—four times the size of Berlin, Germany.

The Junta Nacional de Bomberos ordered 29 Magirus C5 forest firefighting vehicles especially for such operations. As a single-tire all-wheel variant with an all-steel cab (1+5), the 150E30 WS Eurocargo chassis shows its strengths most especially on unpaved terrain. The technical firefighting structure includes a 3,000 liter tank and the Magirus MPN 230 pump, together with reliable self-protection for vehicle and crew.

The vehicle shipment to Chile has already commenced, traveling from Germany to South America via sea. The official delivery to the Chilean fire departments will take place following their arrival.