The Los Angeles County (CA) Fire Department (LACoFD) has always been a front-runner in air attack superiority for wildfire operations in the Southern California area.

Back in 2001, the county purchased and put in service the first Sikorsky S-70A Firehawks in operation for any fire department in the United States. The S-70A is the civilian version of the Sikorsky UH-60L Blackhawk that Sikorsky has been building for more than 25 years for the U.S. military. Los Angeles County has operated three of the older generation Firehawks that were more military designed.

Fast forward to 2017, and the wildland fire season in California was devastating.

It was the most destructive wildfire season on record, which saw multiple wildfires burning across California. A total of 9,133 fires burned—1,381,405 acres, according to the California Department of Forestry and Fire Protection—including five of the 20 most destructive wildland urban interface fires in the state’s history. Throughout 2017, the fires destroyed or damaged more than 10,000 structures in the state (destroyed 9,470, damaged 810), a higher tally than the previous nine years combined. State data show that the large wildfires killed 43 people—41 civilians and two firefighters—almost higher than the previous 10 years combined. 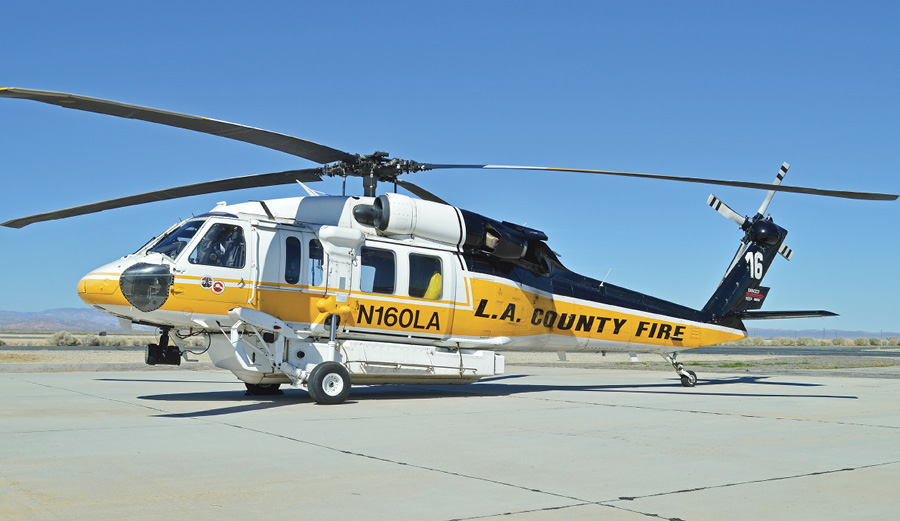 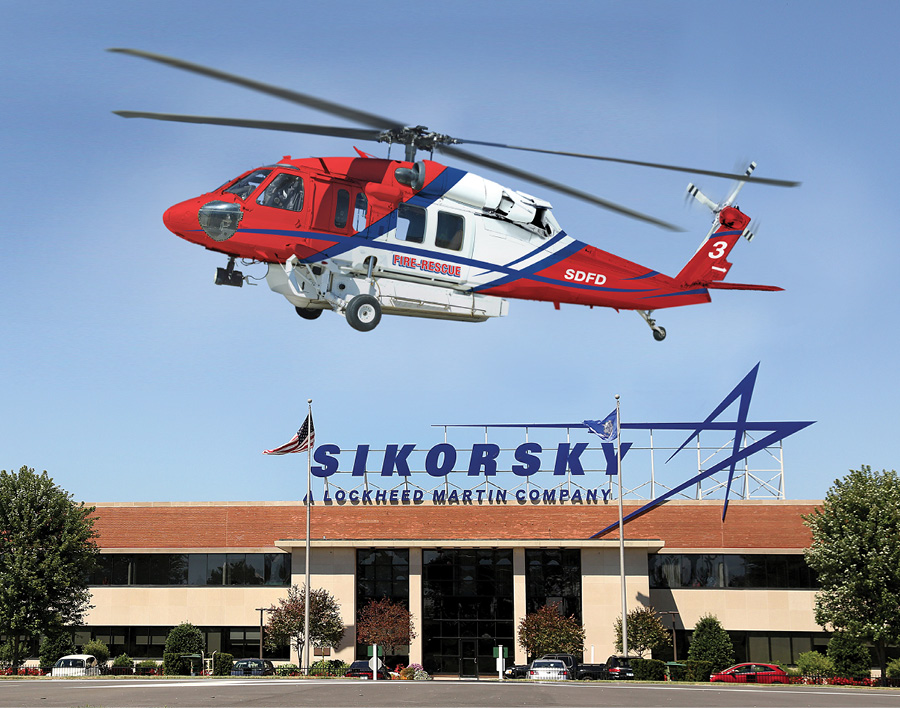 The LACoFD was contemplating the purchase of new helicopters for the future. The workload was increasing, and the department and pilots liked the versatility of the S-70 Firehawk and wanted to improve on the design.

According to Janette Eaton, RVP of North American Commercial Sales for Sikorsky, “When we started with the project on the new variant of the Firehawk, the goal was to carry as much water as possible without interference or reduction to the cabin so it could be multimission, with the tank installed, with the quickest dash speed possible in between water and refueling sources. Thus, having a retractable snorkel hose was a must.”

The end result was the Firehawk® 70i, which is an effective tool during the initial attack—for the following reasons:

The Firehawk® provides the following:

The aircraft will be modified by United Rotorcraft, in Denver, Colorado, with a 1,000-gallon water tank, extended landing gear, single-pilot cockpit layout, troop-carrying capability, swift water and search and rescue modifications, and a medically equipped interior

The S-70i is about 940 pounds lighter than the UH-60M, which is a key factor to allow a maximum load of water. Sikorsky removed the military survivable or “defensive systems” from the aircraft such as the hover infrared suppression system (HIRSS). HIRSS not only adds weight but takes away power and adds drag. Removal of military application equipment and its provisions provided substantial weight savings, improving performance without taking away from the reliability or safety of the aircraft—and these firefighters deserve the safest product possible.

3 One of 12 Sikorsky S-70i helicopters to be delivered for CAL FIRE.

The S-70i can do everything the M can do but with increased payload performance. (i.e., at the same power, same torque, and same conditions, the S-70i wide chord blade contributes to an increase in lift of 500 pounds). The wide chord rotor blades offer enhanced lift and a stronger airframe, and the aircraft features a digital glass cockpit with flight management system for enhanced situation awareness, precision hover capability using enhanced GPS and inertial navigation system, and a cockpit voice and flight data recorder. An integrated vehicle health management system (IVHS) will monitor the aircraft’s operational health.

The S-70i also has a new engine, the GE T-700 701-D, providing improved efficiency with additional power (approximately eight percent power increase at maximum torque). The combination provides more than a $400 reduction in direct operating costs over the legacy H-60 aircraft ($430 calculated). It will be able to lift an increased payload by 850 pounds over the A model.

More than 1,100 UH-60M/S-70i’s are now in service with improvements made by the US Army/Sikorsky from the 1986 vintage UH-60L/S-70a. The latest third-generation BH provides a 25 percent increase in airframe fatigue strength; improved corrosion improvements, the same as the U.S. NavalHawk; IVHMS; component qualification to MIL-STDs; improved durability/ruggedness; dynamic blades drive systems; and engines with 35 percent improvements in corrosion prevention and additional power, which all contribute to lowering the inspection interval from 360/720 to 480/960, resulting in lower direct operating costs.

Operating the older generation Firehawk has given the LACoFD great results. According to Senior Pilot Tom Short, “Our initial Firehawk was a game changer when it was added to the fleet. It is more powerful performing our missions than any other aircraft. It adds night operations safety, multiengine capability with extensive power, higher speed, and a larger cabin with greater payload. It changed what we could do for the county and now sets the standard. It is a multirole aircraft that we can reconfigure in a few minutes. I don’t know of another aircraft that can change roles like that and do it so quickly and do it so well.”

Pilot Paul Gottwig adds, “Maneuverability is critical to us. The Firehawk can maneuver tightly all the way to max gross weight. It is extremely nimble with tail rotor authority that allows the Firehawk to operate in conditions unlike any other aircraft—Santa Ana winds, for example.”

Senior Pilot Mike Sagely says, “We have a no-fail mission. Our aircraft are ready to fly 24/7/365. That is everything to us. The reliability of the Firehawks is exceptional. They are always on the go and always there for you. The fact that they are military designed but used in a civil agency is fantastic. The capabilities of the new-generation Firehawk will allow us to expand operations. The precision hover feature will allow us to perform mountain and ocean rescue profiles that were previously too difficult due to human performance limitations.

“Getting to remote locations is important. We have diverse terrain from sea level to 10,000-foot mountains, extreme weather conditions, high temperatures, and high winds throughout the year. The Firehawk is well suited for these conditions because of its increased performance capabilities and is routinely dispatched over other aircraft for these reasons.

“Versatility is the name of the game in emergency services, especially firefighting. The Firehawk has the unique ability for ground fills as well as snorkel operations, which allow us to utilize water sources close to the fire and adapt rapidly to changing conditions. The Firehawk also provides accurate and reliable water drops, which translates to an increased margin of safety while working with ground crews.”

Senior Pilot Eric Pacheco comments, “I’ve had the fortunate opportunity to fly some great aircraft over the span of my career, but this is one of my favorite aircraft to fly because of its increased capabilities. The S-70i is more hands-free, with an enhanced mission profile that allows us to do more with this Firehawk than we have ever been able to do in any other aircraft before.

“Time after time, I would put the aircraft through its paces in conditions that no one else in the world flies in, and the Firehawk would perform efficiently, effectively, and most importantly safely. We saved a lot of homes and helped a lot of ground units during those night campaigns. Talk about a rewarding feeling of accomplishment.”

On the recent La Tuna fires in Los Angeles, California, Pacheco says, “We made well over the 100-drop mark for the second day in a row then peeled ourselves out of her. She answered my call, and I rode her hard without a whimper …. I love this machine in the role we task her!”

The City of San Diego is excited about receiving its first Firehawk. The Firehawk configuration of the Black Hawk is the most capable multimission firefighting helicopter available, with proven military grade capabilities, says Chief Brian Fennessy, San Diego Fire Department. “Fires are spreading faster and getting larger. The need for aircraft to carry more water has become critical.” 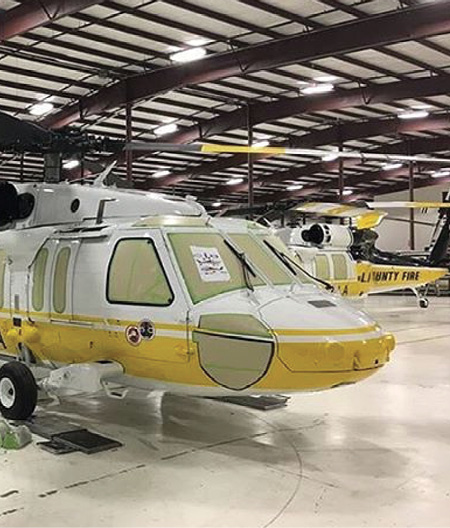 4 A Sikorsky S-70i under construction at United Rotocraft in Colorado.

“When configured for its aerial firefighting mission, the Firehawk helicopter will give the City of San Diego a state-of-the-art platform proven to fight fires from the air and perform other life-saving missions,” says Dan Schultz, president of Sikorsky. “This aircraft’s military pedigree, unique equipment, and advanced onboard systems will enable San Diego to perform these high-endurance missions with safety and reliability. Welcome, San Diego firefighters, to the Sikorsky helicopter family.”

“As wildfires continue to ravage our state, we must do everything in our power to make sure the San Diego region is as prepared as possible for the next major fire,” says Mayor of San Diego Kevin L. Faulconer. “We must continue to ensure our firefighters have the most advanced tools at their disposal to keep San Diegans safe. This new Firehawk helicopter is going to take our aerial firefighting capabilities to the next level.”

I am sure additional orders will take place as more Southern California fire departments see the firefighting and EMS versatility that this rugged helicopter provides.