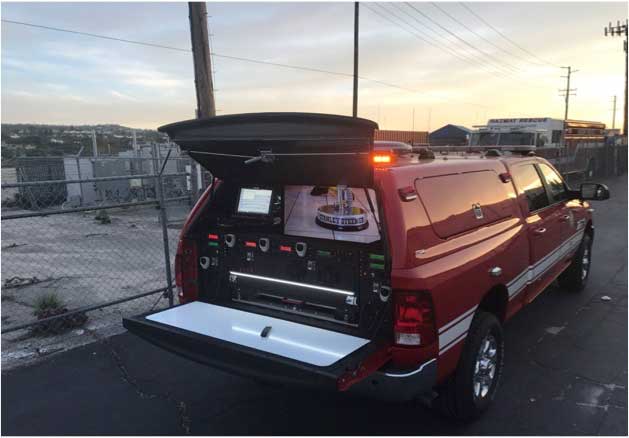 The Los Angeles City (CA) Fire Department has been running battalion chief command vehicles for a number of years, previously using two-wheel drive Chevy Suburbans with command units in the rear section. Then the department tried pickup trucks with short beds holding command modules, but found them lacking. The department’s third prototype was a four-wheel-drive pickup truck chassis with a utility box on the back similar to that found on a mechanic’s vehicle, but that type didn’t suit the department’s needs either.

Wade White, assistant chief, says he pulled together representatives from the chief officers association, the department’s labor organization, and drivers (called staff assistants) from United Firefighters and put the challenge to them to collaborate on developing the best battalion command vehicle to fit the department’s needs. “They put together a balsa wood and cardboard mockup inside a conference room of a command module for the rear of a vehicle, and also a mockup of a module for the cab,” White says. “The committee wanted the modules to function ergonomically for the user, and they went through several variations before coming up with the final mockups.” 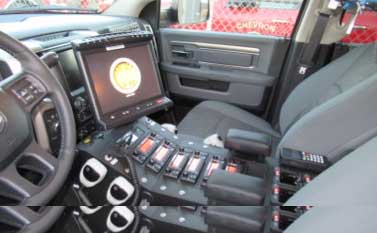 The control module for the command center has a location in the cab, as well as in the back of the truck.

White says computer-aided-design drawings of the front and back layouts were designed, and once the specs were developed, the committee had decided on a four-wheel-drive pickup truck with a camper shell. Ultimately, Los Angeles City went with a four-wheel-drive RAM 3500 chassis and four-door cab supplied by Kevin Buzzard of Wondries Fleet Group with the command modules built by 911 Vehicles. The rigs are powered by eight-cylinder diesel engines and have a Tuff Top-built shelf in the back that has a mesh embedded in the fiberglass to allow the unit to be grounded to the camper shell.

The command module in the rear has three positions, White points out, flush inside the vehicle, pulled out one position to access white boards on the sides, and pulled fully out to the third position to access an SCBA, turnout gear, first aid kit, AED, and an ice chest that are secured on the slide-out behind the command module. “We used a construction-type contractor’s slide-out and built the unit around that,” he says. 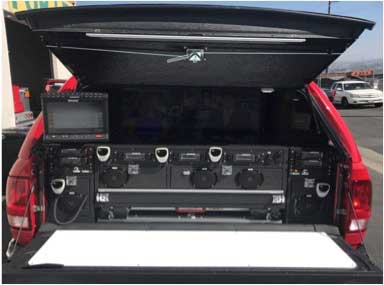 The command module in the back of the truck can be used in three positions, shown here in its flush inside the vehicle location.

Dan Walters of 911 Vehicle says the department wanted the ability to take the command vehicle into the field, shut off the diesel engine, and plug the command module into a generator off a 50-foot extension cord. “There’s so much technology available to the battalion chief on the module, such as radio communication with dispatch and other fire units,Iinternet connection, and even a drone program that displays video on a 40-inch screen,” Walters says. 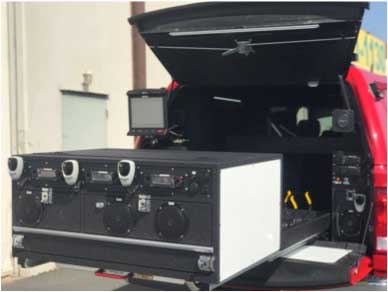 This view shows the command module pulled out to one position to access white boards on the sides.

Jeff Alario, retired deputy chief at Anaheim (CA) Fire & Rescue, who works with 911 Vehicle, says Los Angeles City wired each of its command units with two WiFi networks so the battalion chief always has a strong signal. “The command modules have a large modem that will handle up to 25 devices each,” Alario observes. “On one side of the module, we have large PVC tubes that hold maps of undergrounds and building plans, there’s a file cabinet on one side, and an Apple TV and high-definition TV for the battalion chief to see what local news helicopters might be broadcasting about a scene.” 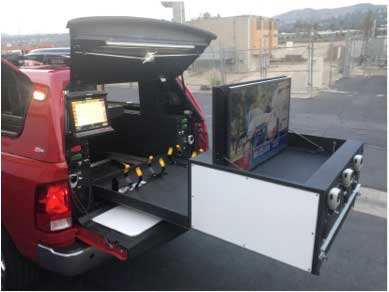 The command module is shown fully extended in order to access turnout gear, SCBA, first aid kit, an AED and an ice chest on the slide-out. Note the 40-inch video screen deployed on the module.

White notes that the first new RAM 3500 that went in service was used very quickly on a large wildland urban interface fire. “We were able to put up drones and display their feeds on a 40-inch video screen,” White says, “which means we didn’t have to put up a helicopter to get fire visuals. The command module performed very well, and from that time our phone rang off the hook from battalion chiefs wondering when they could turn in their Suburbans and get a new RAM command module vehicle.”

He notes that the new vehicles are cost-effective because of their multiplexing systems, which allow the electrical load to be shed. “If the back command module is shut down, the batteries are not taxed,” he pointed out. “I would recommend this type of unit to other fire departments. First, we are isolating turnout gear from the passenger space; second, we created a barrier between vehicle occupants and equipment in the back; and third, the unit gives command teams everything they asked for in terms of situational and resource awareness.”