Most fire apparatus being built today are being fitted with LED lighting in place of previous types, likely for their lower power draw and brighter lighting.

Since LEDs have become so popular, there is now a dizzying array of LED lighting options to choose from for warning, scene, compartment, overhead, and underbody uses. This article looks at the popular offerings of LED lighting for apparatus and portable scene lighting.

Will Turcios, product manager for Safe Fleet’s FRC and FoamPro, says that brighter LED lights have been widely accepted by the fire market, especially for safer scene lighting. “When FRC got into LED scene lighting in 2010, other industries were already using the technology, so we learned how to apply it for fire market uses,” Turcios says. “The lights have to be compact, because weight is important; be very durable; and have a low power consumption.”

Turcios says FRC quickly adopted LEDs applied on a substrate—a 1⁄8-inch-thick circuit board with an additional layer to keep the light cool. “We started with the Evolution series and then introduced the Spectra,” Turcois notes, “which deliver more light consistently at temperature saturation.” 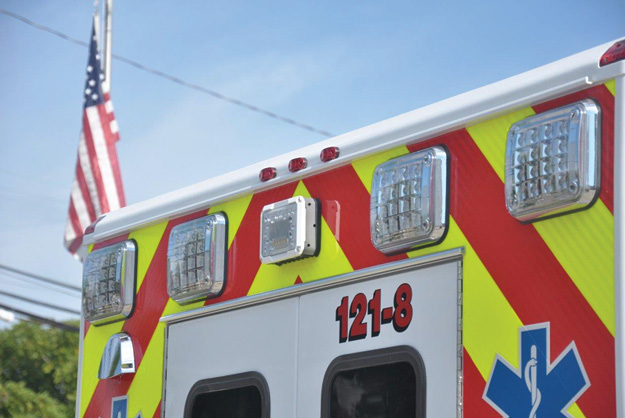 He adds that FRC uses lenses in its LED lights instead of reflectors. “We capture and redirect the light through optic design technology and manipulate the light beams to produce the best light pattern and not lose light in areas you don’t need,” Turcios points out. “Our lights project straight out and down so they don’t lose light upward.”

Michael Dupay, Safe Fleet’s division vice president of marketing for the emergency and industrial group, says FRC’s Spectra LEDs are very popular in the fire industry. “The Spectra is very well designed and can fit applications from pole to brow to surface-mounted lights,” Dupay says. “You point the lamp head where you want the light, and the LED lights up the distance as well as the ground in front of the apparatus.”

Dupay says that FRC’s Spectra 950 is a new perimeter light instead of a typical scene light. “It’s a flush-mount light for the side of an apparatus that will light up the area all around the vehicle,” he points out. “That’s accomplished through the lens design, where the light is redirected to develop a different light pattern and give an even coverage of light.” 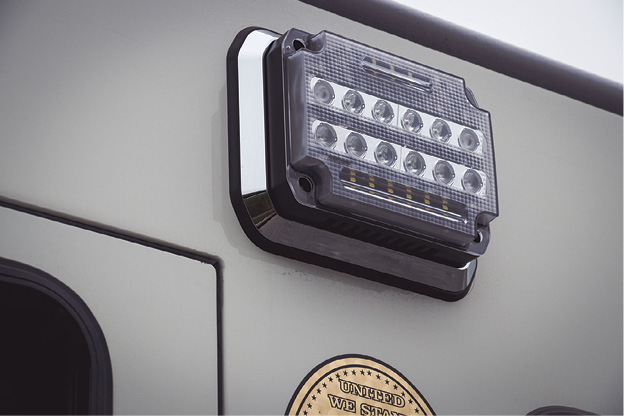 Matt Kehoe, director of fire, EMS and amber sales for Whelen Engineering Co. Inc., says Whelen’s Pioneer family products “have grown enormously and are very popular in various uses on fire apparatus.” He says that Whelen has introduced the Pioneer Summit series, a brow-mount LED light used to illuminate a scene. “It uses new technology and our ProClera silicone optics, which is a new way of optical dispersion of lighting that gives more efficient and better dispersion,” Kehoe notes.

Michael Holstein, Whelen’s training and development manager, says that an optic is a cone that goes over the LED and opens up as it protrudes. “A silicone optic is a different way to have a reflector behind a light bulb,” Holstein says. “Instead of an LED shining into a reflector and projecting out, we are projecting through the silicone, which is much more efficient. The design of the cone over the LED is so precise, it can project exactly where we want the light to go.”

Kehoe says that Whelen’s use of its Pro Focus technology allows an LED light to be switched from spot to flood light with no mechanical moving parts. “It’s a solid state and electrically switched optic that gives a seamless transition from spot to flood,” he says. “It’s available in our illumination lights now and can vary the light at any point between spot and flood.”

In terms of warning lights, Kehoe says Whelen works with end users on their product needs and to get information on new shapes and designs needed. “Our M series gives a superior performance with light output,” he notes, “and we also hard coat the lenses to give them an integrity that lasts for a long period of time.”

Whelen also makes the V series, a combination warning and illumination light that puts out 180 degrees of lighting, Kehoe says, as well as the RotaBeam, a solid state light with no moving parts that simulates a rotating pattern by having the LEDs flash in a sequential pattern. Whelen also produces LED compartment lights and traffic advisors “in every shape, size, and height you can imagine,” he says.

Roman Gaines, product manager for Weldon, a division of Akron Brass Company, says he thinks scene lighting on fire apparatus is between 80 and 90 percent LED now. “I think LEDs are becoming mature, and future changes will be around how OEMs can configure them and put them on fire vehicles in a more streamlined fashion,” Gaines says.

Pete Lauffenburger, director of global product management for Akron Brass, says Weldon’s surface-mount Diamondback LED scene lighting is popular in EMS markets because of its lower light outputs, while Weldon’s Scene Star and Revel models, both high-power LED lights, are typically used on fire apparatus. “The Scene Star LED lights can be recessed, while the Revel is a surface-mount LED fixture,” Lauffenburger points out. “A lot of truck makers prefer surface mounts for the ease of mounting and not to interfere with anything behind the skin of the truck.”

Lauffenburger notes that the Revel model has several different light settings, from full on to a number of lower output settings. “LED technology controls the light much better than halogen lighting,” he says. “Because we can control each of the individual LEDs, in the Revel a portion of them are used as spot and a portion for flood, which allows you to light up the ground from the apparatus up to the front of a structure.”

The benefits of LED lights, Lauffenburger notes, are “zero maintenance, up to 50,000 hours of run time, higher lighting efficiency, more light from less power, and a color temperature that is much closer to daylight, giving a whiter light than a halogen light.” 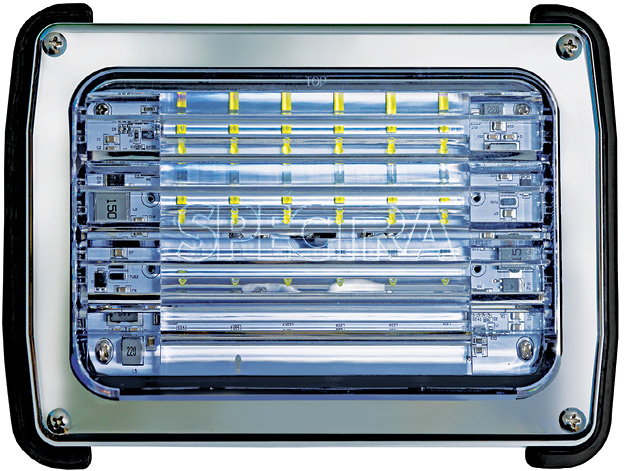 4 FRC, a division of Safe Fleet, makes the Spectra 950, a perimeter light flush-mounted on an apparatus that uses a new lens design to light up all of the area around an apparatus. (Photo courtesy of Safe Fleet.)

Sam Massa, president of HiViz LED Lighting, says his company introduced the FireTech brand of LED lighting six years ago that has expanded to include brow, scene, work, compartment, head, and other lighting options. “The FireTech Brow Light is a forward-facing scene light up to 72 inches wide with three circuit sections,” Massa says. “The center section lights up 10 degrees, while the side sections provide 40 degrees of flood lighting. The light is bolted onto the leading edge of the cab where the marker lights would be, which are incorporated into our fixture.”

Massa says that surface- and body-mounted LED scene lights have evolved to put out much more light and that he’s seen some fire departments wrapping an entire truck in scene lighting. “The biggest problem, with regard to lighting, is thermal management of LEDs,” he says. “When a fixture gets hot and reaches its thermal saturation, it can lose up to 40 percent of its lighting ability, called thermal fade. To counteract that, we take the aluminum circuit board the chip is bolted to and attach it to an aluminum housing with epoxy encapsulating the top half so it’s waterproof, but the back half acts as a thermal conductor instead of an insulator.” 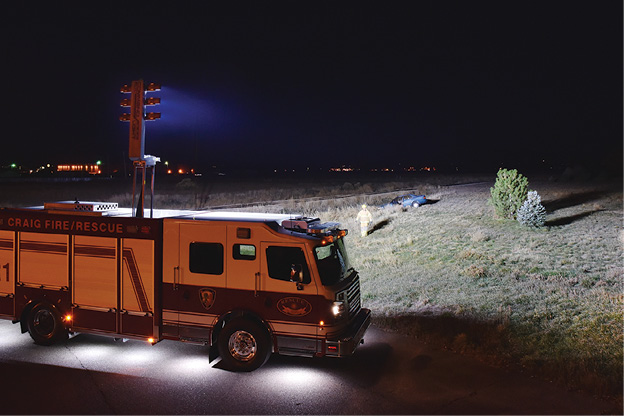 Steve Cole, sales representative for TecNiq, says his company’s High Output Scene Light can be set up with either a spot or flood light lens, depending on the type of need. “We offer that light in a flat surface-mount in 6- × 4-, 7- × 3-, and 9- × 7-inch versions that put out from 5,000 to 25,000 lumens,” Cole points out. “With our expertise in optics, we broadcast the light onto the ground around the vehicle and some light a distance away from the scene to give a large arc of light.”

TecNiq also makes the K Series LED warning lights, Cole says, “where we use optics to shine lighting forward and also spread it left and right to warn intersecting traffic as well.” He adds, “Our LEDs are some of the thinnest in the industry, using an aluminum heat sink instead of thermoplastic, which allows us to have better thermal management.” TecNiq also makes the D21 Link Light, a four-inch-long LED light designed to snap together, which is used in steady burn applications like in cabinets and rub rails, Cole says.

Roger Weinmeister, president of Command Light, says he has been “knee deep in studies on the brightness of LEDs. Sometimes, light at the wrong position on the apparatus can cause too much brightness in your eyes.” To counteract that problem, Weinmeister says that when grouping lights, it’s best to emulate the sun, where there is a downward angle, giving more efficiency of the light. “Too bright a light at too low of an angle can lose the topography between the truck and an accident scene,” he observes.

Weinmeister points out that the most popular ranges for lighting a scene are between four and seven feet above the top of a fire apparatus, which puts the light in the 15- to 20-foot range above the ground. “Take the same lights and raise them to 30 to 40 feet over the apparatus,” he says, “and you have less intensity because the light spreads out.”

Command Light’s light towers use all models and brands of LED light heads, Weinmeister says. The CL is a heavy-duty light tower that elevates to 11 feet off a vehicle, which Weinmeister calls “a preeminent light for rescue trucks.” The Knight model also is a two-stage light that elevates to seven feet off the top of a truck, often used on engines and small rescues, he says. Command Light also makes a Slim model for aerial apparatus that uses two 40-inch and two 20-inch LED light bars as well as the Shadow model, which comes in four-foot and eight-foot height versions. “All of them have the ability to go up and angle over the side of the vehicle to give that downward angle to the light,” he says, “so you don’t blind firefighters, other apparatus, or choppers. It also helps to get light down into ditches and variations in terrain.” 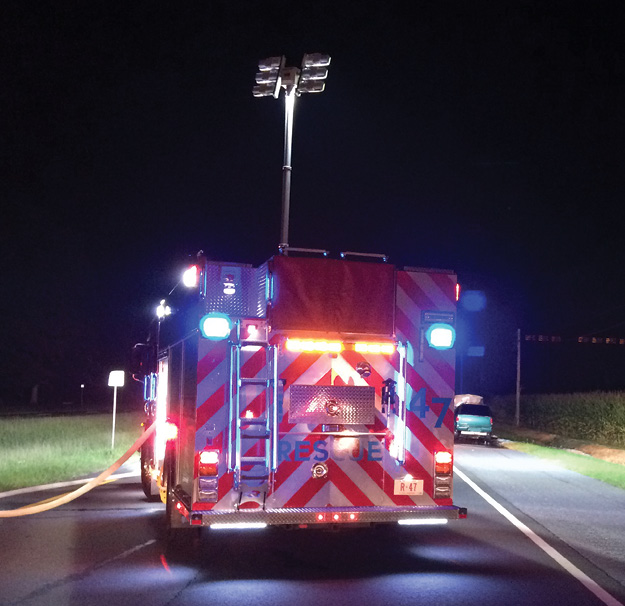 Dave Cotsmire, director of marketing for Will-Burt, says about 80 percent of his company’s light towers are LEDs, using spot, flood, or spot-flood combination fixtures. “Our Night Scan XL200 is a 20,000-lumen light that uses a HiViz FireTech LED fixture designed specifically for a light tower,” Cotsmire points out. “The circuitry is designed to work with the tower and the optics adjusted to illuminate the ground from above, rather than straight out from the truck.”

Drew Newman, Will-Burt’s manager of the lights and sales team, says Will-Burt makes the Scout, Chief, Powerlite, Profiler, Xtreme, and Vertical models of LED light towers that can be fitted to fire vehicles. The features of LEDs over halogen lights are their robustness, Newman notes, “because halogen lights are much more fragile, and longevity, where a good LED fixture will give you 50,000 hours compared to about 250 hours from halogen. Most LEDs will outlive the life span of the apparatus.”