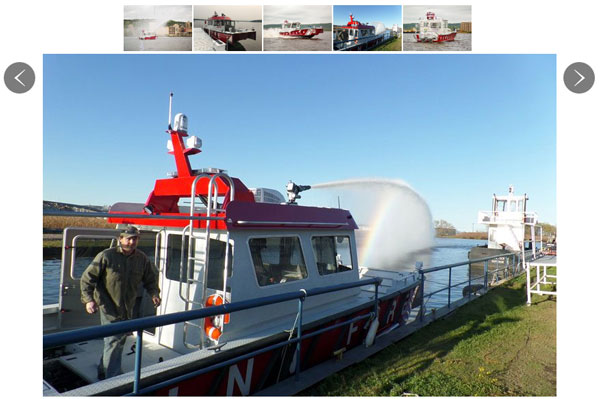 CLICK ABOVE FOR A GALLERY OF THESE FIRE BOATS >>

Two fire boats built by Lake Assault Boats have supported firefighting teams in two Wisconsin areas—Superior and Lake Geneva—with one of the support missions coming as the boat was undergoing final testing before delivery to its new owner.

Chad DuMars, vice president of operations for Lake Assault Boats, says his company manufactured a 32-foot landing-craft-style, modified V-hull configuration fire boat for the Linn Township (WI) Fire Department, which protects 25 miles of shoreline on Lake Geneva, Wisconsin. DuMars says the Lake Assault fire boat was called on to help fight a large fire in a corn drying facility near the shores of Lake Geneva. “The fire boat, with a one-person crew, supplied 45,000 gallons of water to several tenders from mutual aid departments that were called upon to help battle the blaze,” DuMars says.

The second incident took place in Superior, where a Lake Assault team was in the final stages of testing a 28-foot fire boat destined for the city of Newburgh, New York, but was diverted to respond to a fire on an ore boat at Fraser Shipyards.

In the Lake Geneva incident, Jason Smith, chief of the Linn Township Fire Department, says a corn dryer caught fire and a mutual aid call went out for assistance. “In a corn dryer, wet corn is dropped into a pit where it runs through a dryer at the top, is heated in the middle, and then out of the bottom to dry, followed by going into bins for storage,” Smith says. “It’s like an upright silo that can hold two semi loads of corn.”

Smith notes that the top two thirds of a corn dryer is where the heat is located. “The bottom has about a dozen doors accessing a four-foot-wide tube to the top,” he says. “At the top is an inverted funnel that spreads the corn to the sides of the dryer so it’s not all in the middle. The burners are supposed to shut off if any other part of the dryer stops working, but that didn’t happen.”

He notes that the strategy is to open one door at a time to let the corn out and put out the ensuing fire. “You have to let the corn out on opposites sides of the silo or it could tip over,” he adds. “Once you open all the doors and remove the corn that wasn’t burning, then you’ve introduced air into the corn dryer and get a full blown fire at the top that will then vent to the sides so you can reach it. We were there for six hours on the scene.”

Dan Pitt, Linn Township’s assistant chief, operated the fire boat and pumped the 45,000 gallons of water over the six hour period. “All the landside apparatus was supplied by the fire boat,” he says. “There was one engine and a ladder tower at the scene, along with our three tenders (tankers) and seven tenders from mutual aid departments.”

The department used a single five-inch large diameter hose (LDH) from the boat to fill a 4,000-gallon portable water tank, which then was drained by the tankers shuttling water to the engine and ladder tower.

In the Superior ore boat incident, DuMars points out it was the first time Lake Assault Boats had ever responded to a live fire with a craft during its final preparations for delivery. “We’re very proud the boat performed flawlessly with the Superior (WI) Fire Department and that it’s now on duty with the city of Newburgh (NY) Fire Department, protecting vital portions of the Hudson River.”