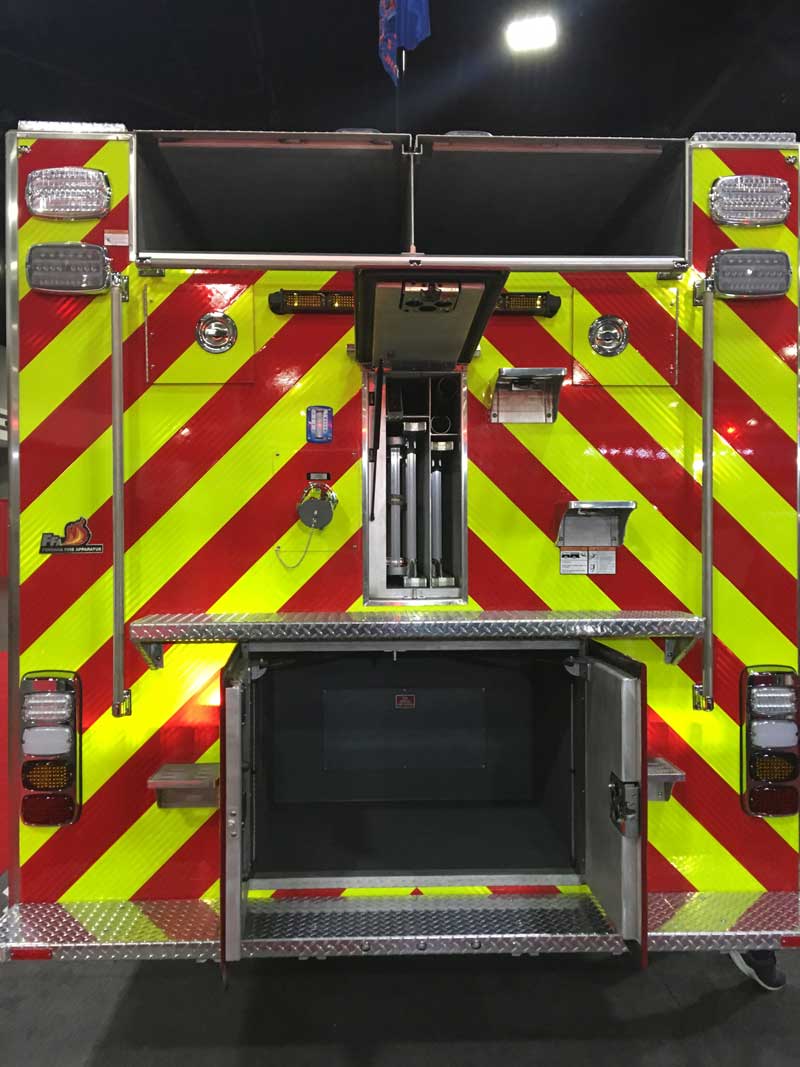 The 2019 FDSOA Apparatus Specifications & Maintenance Symposium was once again a highly informative event to learn about the latest features, products, and changes in the fire apparatus industry.

One of the key presentations was an update on the proposed changes to National Fire Protection Association (NFPA) 1901, Standard for Automotive Fire Apparatus. Several members of the audience were dumbfounded when they learned that one of the proposed changes was to allow fire departments to choose their own colors for the chevron striping on the back of apparatus.

Sadly, this is an initiative driven by the fire service, hopefully a vocal minority. Why would the manufacturers care? They would prefer to carry fewer colors in their inventory and not have to invest time in customizing each striping requirement, a cost that is not absorbed but passed on to the customer. The current requirements for chevron striping state, “Each stripe in the chevron shall be a single color alternating between red and either yellow, fluorescent yellow, or fluorescent yellow-green.”

What was the reason for the chevron requirement that became part of the standard 10 years ago? Safety for the firefighters working at the scene and to minimize the risk of the apparatus being struck from the rear. Has this requirement worked? There is no data system that captures such information, but there is plenty of history that shows it does. The European fire service has decades of history, not just one decade like in the United States. Obviously, the standard does not guarantee a firefighter or fire apparatus will not be struck, but it reduces the probability and indicates the fire department’s commitment to safety.

Ten years ago, roadway safety was becoming a big issue, and the forward thinkers realized that fire apparatus need to be as visible as possible. On reflection, those forward thinkers were absolutely correct about the dangers of operating on roadways, and their approach was sound. They realized that visibility is not just for nighttime but for daylight, dawn, and dusk. A key selling point on the idea was a photo taken from an overpass of a Plano (TX) Fire Department rig at a multilane incident several hundred feet away. It was a bright, sunny day, and the rigs were most conspicuous because of the fluorescent yellow and red chevrons.

Moreover, the forward thinkers were aware of the Manual for Uniform Traffic Control Devices (MUTCD). This manual contains a section on temporary traffic control (TTC). Although the MUTCD does not prescribe specific requirements for fire apparatus, it states: “Traffic control devices shall be defined as all signs, signals, markings, and other devices used to regulate, warn, or guide road users, placed on, over, or adjacent to a street, highway, private roads open to public travel.”

“The basic safety principles governing the design of permanent roadways and roadsides should also govern the design of TTC zones. The goal should be to route road users through such zones using roadway geometrics, roadside features, and TTC devices as nearly as possible comparable to those for normal highway situations.”

The word “Uniform” in the title of the MUTCD has meaning. Meriam Webster has four entries in its definition, one of which states: “presenting an unvaried appearance of surface, pattern, or color.” The MUTCD is the national standard in all facets of using traffic control devices. A couple of interesting quotes from its Web site are worthy of mention. “… law enforcement personnel rely on the MUTCD as they monitor driver behavior and investigate traffic incidents. The insurance and legal communities frequently refer to the MUTCD when investigating claims or proceeding with legal activities that arise from traffic-related incidents.” Why would any fire department want to be in noncompliance with the MUTCD?

Enough of the legal aspects. Allowing fire departments to choose their own warning colors probably seems okay on the surface, and who should be telling us what to do, anyway?

Let’s look at it from another angle. Fire departments operate on roadways used by the public, and the public travels beyond the response area of the local fire department. In most parts of the country, if you take a 50-mile ride, you will go through more than a dozen different fire jurisdictions. What if the size, shape, and color of a stop sign or traffic signal varied from jurisdiction to jurisdiction? What if construction zone barrels were different colors? What if the color of safety vests varied? The MUTCD exists to keep this from happening.

Equally, and more important, is the value a fire department places on keeping its members safe. The number of firefighters being struck by vehicles is growing each year. Drivers are more distracted than ever. Ten firefighters died after being struck by vehicles in 2017, which is a much greater number than the average of four annual deaths in the past 30 years—a 250 percent increase! This year is already on track to exceed previous years: In the first two weeks of January 2019, four first responders were struck and killed at incident scenes. Do some fire departments value the appearance of the fire apparatus more than they value the safety of their members?

On February 1, 2019, the International Association of Fire Chiefs and the Emergency Responder Safety Institute issued a safety alert urging all fire chiefs and officers to immediately issue a safety and survival alert in their departments. A quote from the alert: “Operations on roadways are high-risk, high-frequency events,” said Chief Dan Eggleston, IAFC president and chairman of the board. “With distracted driving, drivers under the influence, along with road and weather conditions and related traffic, firefighters are more at risk now than ever before, and unfortunately, numerous recent crashes back that up.”

As was mentioned earlier, this is a proposed requirement. It could still change. An interesting conundrum for the NFPA 1901 technical committee if the proposal goes through is in chapter 4.6: “The apparatus shall comply with all applicable federal and state or provincial laws and requirements.” Should the proposed language go through, the door is wide open for someone to challenge the requirement before the general membership of the NFPA through the Notice of Intent to Make a Motion (NITMAM) process. And, Life Safety Initiative Number 16 should be highlighted: “Safety must be the primary consideration in the design of apparatus and equipment.”

Chief Gordon Routley, during one of the general sessions at the FDSOA Apparatus Specifications & Maintenance Symposium, brought up the subject of fire departments “blacking” their apparatus. He asked a simple question: “Why?”

ROBERT TUTTEROW retired as safety coordinator for the Charlotte (NC) Fire Department and is a member of the Fire Apparatus & Emergency Equipment Editorial Advisory Board. His 34-year career includes 10 as a volunteer. He has been very active in the National Fire Protection Association through service on the Fire Service Section Executive Board and technical committees involved with safety, apparatus, and personal protective equipment. He is a founding member and president of the Fire Industry Education Resource Organization (F.I.E.R.O.).

Cleaning and Disinfecting Our Units: What We Need to Know