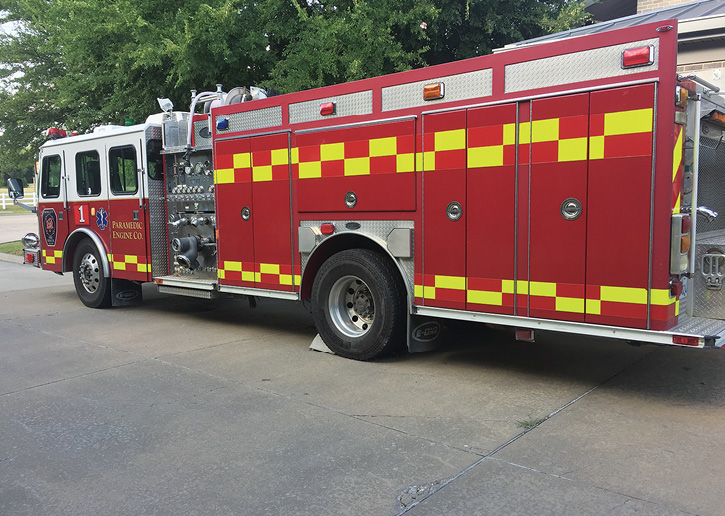 Last May my “Keeping It Safe” column about chevrons on the rear of the apparatus created a lot of feedback.

The premise of the column was that the National Fire Protection Association (NFPA) 1901, Standard for Automotive Fire Apparatus, technical committee is considering a change to the requirement of the chevon colors being fluorescent yellow and red to any color a fire department wants. My opinion, which has a scientific basis, is that the fluorescent yellow and red is far more visible than any other combination for visibility in all lighting conditions (day, night, dawn, dusk, and artificial nighttime lighting).

I received strong feedback on both sides of the discussion. These included photos of an all-black apparatus. It was a beautiful rig, but I wondered if it was for daylight use only. I also received feedback from a European fire apparatus striping researcher who showed that the chevron stripes should be wider than the minimum four inches. His recommendation was to at least double the width.

One of the noteworthy responses regarding reflective trim came from Driver/Engineer Tommy Robnett from the Rowlett (TX) Fire Department (RFD). His response was triggered by my July column last year about working safely around apparatus, which was the second of a two-part series on the subject. In that column, I made the following statement: “By the way, has anyone checked out the visibility of the checkerboard striping on the side of some European apparatus? Hmmm ….”

1 The checkerboard, or Battenburg, striping on Block 1. [Photos courtesy of the Rowlett (TX) Fire Department.]

The RFD has dedicated an engine that was recently taken from front-line service as a blocking apparatus. It is called “Block 1.” The apparatus stands out because of the checkerboard (or Battenburg) striping (see photo 1). Block 1 was retrofitted with the Battenburg striping and directional signals on the rear. To quote Robnett, “RFD chose to go with a very aggressive checked board striping pattern to make the rig more visible. The rig carries extra extrication equipment, air bags, traffic cones, and signage to assist at MVCs. The Block also carries additional water for vehicle fires on the highways. Block 1 is normally dispatched to any accident scene where the speed limit is greater than 40 miles per hour. Block 1’s main responsibility is early, advanced warning to oncoming drivers. Block 1 serves as a barrier between our front-line apparatus and any oncoming traffic. RFD normally sends an engine and a ladder or two engines to all MVCs on major roadways and highways. When staffed, Block 1 is also dispatched. Once the Block is on scene, one of the other engines or ladders can clear if their manpower is not needed. This helps to limit our frontline apparatus exposure to heavy traffic. Block 1 can be special called to any incident by the incident commander.”

Robnett went on to say that other departments in the north Texas area (Dallas, Irving, and Garland) also have dedicated blocking apparatus. He said each department has stories to tell about how the blocking rigs have saved firefighter lives and damage to front-line equipment. Anecdotally, it seems an apparatus is struck on average of at least once a day. We have all seen the reports, and there are definitely other incidents that do not make the news. Moreover, the number of first responders being struck has risen significantly with more distracted drivers texting while driving. This safety issue can be underscored by looking at the reports at www.respondersafety.com. For example, last August, it, along with the National Safety Council, issued a report that states: “Seventy-one percent of U.S. drivers take photos or videos when they see an emergency vehicle on the side of the road, responding to a fire or a crash, or simply making a routine traffic stop. Sixty percent post to social media, and 66 percent send an email about the situation—all while behind the wheel.”

The use of a blocking vehicle makes total sense. It is an emergency responder life saver. Your department may have one. If not, explore ways of getting one. If you can’t spare a dedicated unit, use a front-line rig. Make sure the blocking vehicle is visible in all lighting conditions. The Battenburg striping pattern on the RFD’s Block 1 is a great example. Be sure to adopt a policy on how blocking rigs are used.

The RFD is also in discussion to put the checkerboard striping on all its future apparatus. Kudos to them for putting the safety of their firefighters ahead of a “trendy look.”

ROBERT TUTTEROW retired as safety coordinator for the Charlotte (NC) Fire Department and is a member of the Fire Apparatus & Emergency Equipment Editorial Advisory Board. His 40-year career includes 10 as a volunteer. He has been very active in the National Fire Protection Association through service on the Fire Service Section Executive Board and technical committees involved with safety, apparatus, and personal protective equipment. He is a founding member and president of the Fire Industry Education Resource Organization (F.I.E.R.O.).