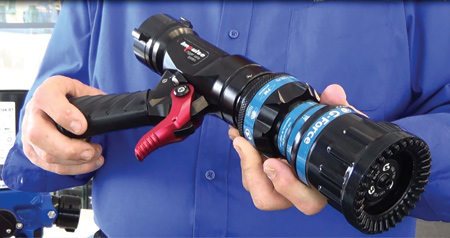 Interschutz 2015 was an educational experience on many levels.

The magnitude-approximately 1,500 exhibitors spread over six buildings and outside exhibits with 51 nations represented-is probably the most striking feature of the show. Learning how to navigate a show of that size for the first time is definitely a “baptism by fire.” But, there is far more to Interschutz than just being a big trade show. With 51 nations sending manufacturers, the show’s international attendees get a chance to see apparatus and equipment designs from across the globe. There is something to learn from everything you see because none of it is the norm you are used to.

Specifically, attendees from North America are exposed to apparatus designed around tactics that differ greatly from the States. But, just because tactics differ does not mean there aren’t design aspects United States fire departments can use on their next apparatus purchases. As Rod Carringer, chief marketing officer of Task Force Tips (TFT) , says, roll-up doors originally gained popularity in Europe before gaining traction in the United States. Today more and more apparatus are rolling off assembly lines with roll-up doors.

The show also represented proof that the United States fire service industry no longer confines itself to the States or even North America. Approximately 100 United States companies ranging from apparatus to apparatus components to equipment manufacturers displayed at the show. Some introduced new products for use in the States and abroad; some introduced products designed specifically to European standards; and some use Interschutz as a means of meeting with international customers and distributors. The show is truly a platform for a variety of purposes.

In the category of bringing a new product already introduced in the States to the global market is the IMPULSE nozzle, by Task Force Tips. This product, which debuted at FDIC International 2015, was actually developed based on European firefighting tactics. “A lot about this trigger nozzle had to do with the European market specifically,” says Carringer. “It’s a lot about meeting the needs of our customers in the European market, especially the northern European market. [We] have talked about some of the tactical applications, where there are very quick little bursts of small droplets and trying not to disrupt the thermal balance in the room. A trigger does so much better than our traditional nozzle with the bail handle on top, where they’ll very quickly try to pulse it to try to get those little droplets to come out. So, the IMPULSE nozzle was born from the European market.”

Conversely, Fire-Dex used Interschutz as an opportunity to debut a line of personal protective clothing designed specifically to meet European standards. The garment it introduced is an EN-469-certified garment, according to Allen Rom, senior regional sales manager. “Fire-Dex has been manufacturing NFPA 1971 apparel products,” he says. “This is our first year specifically making EN-certified garments.” The garment in Fire-Dex’s booth was currently under testing.

Hurst Jaws of Life® used Interschutz to introduce its newest product, the StrongArm, to the entire global market. Fresh off the heels of FDIC International 2015, where it introduced its newest addition to the eDRAULIC 2.0 line, the eDRAULIC 2.0 Ram, and its Vetter stackable air bags, Hurst kept StrongArm for the international stage. “StrongArm is a game changer,” says Bruce Johnston, director of marketing and product management for Hurst Jaws of Life, Inc. “Traditionally, tactical rescue or rapid intervention teams have had a variety of tools to shuffle through while on the scene. But now, StrongArm does it all and saves time and energy in the process. This will be an incredibly useful tool for task forces around the world.”

Finally, Interschutz isn’t just a venue for American companies to introduce themselves and their products and services to the international market. There are also European companies introducing products they hope will catch on globally. For example, Ziegler, a European manufacturer of firefighting vehicles and equipment, had its Z-Cab on display. The Z-Cab is especially designed for the international market, offering a crew cabin with space for nine personnel. Ziegler claims it will fit on almost every chassis.

As important as product displays are at Interschutz-and it’s no wonder, what with approximately 157,000 attendees-many companies use the show as a way to gather international customers and distributors in one place to meet. For example, Paul Darley, president and CEO of W.S. Darley and Company, says, “We sell into roughly 100 international markets each year. We have our local distributors in those countries here, and it makes it very easy for us to come to one location, be able to see all those visitors, and be able to share a meal with all of them.”

Robert Gilbertson, national sales manager for Veridian, states that Interschutz is important to Veridian because, “This is the largest fire show in the world, but more importantly to support our distribution. For this show, not so much Europe, but Asia, the Middle East, Latin America, South America-we’ve met with several of them already because many of them are here. So, to meet with them, to talk with them, to support them.”

Another example of Interschutz being more about relationships is how Waterous looks at the event. Waterous considers Interschutz to be an important show but not for product introductions. “Interschutz is important to Waterous because it’s a unique place where we can meet all of our current customers,” says Mark Severin, marketing and communications manager at Waterous. “Rather than having to travel to each one of them individually, we get to have them all come here. So, it’s kind of a meeting place for us.” Perhaps most important is that Interschutz is about relationships. “Waterous’s philosophy is that we’re here. We know who our customers are; we know who wants to look at Waterous. So, it’s good for relationship building and keeping our existing relationships fresh.”

As a member of the United States fire service, I found it hard to go to a show like Interschutz and not be amazed and enamored by how apparatus is designed and laid out. There are many who consider Europe to be ahead of the United States when it comes to many facets of apparatus and equipment. In some ways, that might be true. In terms of electronics, it is becoming more pervasive in the United States, but even a cursory glance at the rigs on the Interschutz show floor revealed more electronic controls than apparatus in the States. Darley remarked that in terms of electronics, Europe does use them more. His company’s market research says that many in the States still like to turn or pull a valve to charge a line.

A few things stuck out about the apparatus. First, the amount of equipment packed into the trucks is impressive. In many cases, there isn’t a cubic foot of space that is not used to stow equipment. Having said that, not all of it seemed readily accessible from the ground. As impressive as some of the hinged shelving was, to access some of what was stored, a firefighter had to leave the ground. In many cases, these trucks had fold-down steps-not something you see often in U.S. apparatus. And once the steps were folded down, firefighters practically had a platform around the truck to walk on. We often say that the more we can do to keep firefighters’ feet on the ground, the better. I’m not suggesting the way the equipment is stowed is good or bad. But, a good bit of the equipment was not reachable from ground level without getting on the truck.

Tactically, many fire departments in Europe are just different than the United States, and the apparatus there reflects this. Most, if not all, of the pumps are rear-mounted. There is no fancy stainless steel pump panel. There are, as mentioned before, a good deal of electronic controls at the pump. There are also very few, if any, speedlays or crosslays. I was also struck by how many threadless and sexless couplings there were-even for handlines. I like the idea, but I’m not sure how well it would work in the United States based on our tactics. Even the couplings on what would be the equivalent of our 1 ¾-inch lines were big. Our aggressive interior attack tactics benefit from threaded couplings’ streamlined nature. There is less to get hung up on corners and doorways. How they stored their rolls of hose though was neat and clean, and when you think about it, very simple. They basically have slots on the trucks for the rolls of hose.

Finally, the overall lengths of the trucks, considering how much equipment they carry, is almost always significantly shorter than United States apparatus. Again, I’m not saying that one is better than the other, but it is striking that it’s possible to put so much on a single-axle, short-wheelbase vehicle. That said, Rosenbauer did have a Commander chassis on display with a European body. Smeal also brought over a truck to display in the Gaimax stand. And, Ferrara brought over its Inundator pumper. All three trucks garnered much interest because the style isn’t seen often in the European markets.

CHRIS Mc LOONE, senior editor of Fire Apparatus & Emergency Equipment, is a 22-year veteran of the fire service and an assistant chief with Weldon Fire Company (Glenside, PA). He has served on past apparatus and equipment purchasing committees. He has also held engineering officer positions, where he was responsible for apparatus maintenance and inspection. He has been a writer and editor for more than 20 years. 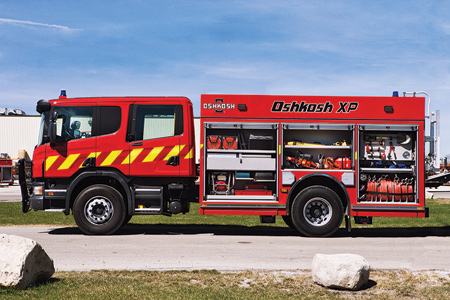 The vehicle is built on a corrosion-resistant 4,638-mm aluminum body with full-height compartments on both the driver and passenger sides. The apparatus is fully outfitted with a 4,000-liter-per-minute (lpm) pump, an integrated foam system, a high-pressure hose reel, and a full complement of rescue tools and equipment. Other features include rugged spatter-paint-finished compartment interiors, roll-up doors with LED strip lighting, and enclosed ladder storage.

“We are entering this market segment with a fully integrated and well-equipped product, along with a service and support network that is second to none,” says Jim Johnson, Oshkosh Corporation executive vice president and president, Fire & Emergency.

According to Ziegler, this fire apparatus is especially designed for the international market. The apparatus shown is built on a C&C 18 t chassis with a 4,200-mm wheelbase. It features a 3,000-liter water tank and 1,000-liter foam tank. 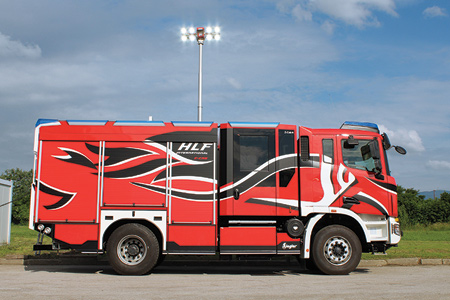 It carries a combined pump with normal and high pressure, a compressed air foam system (CAFS) with a compressor rated at 4,200 liters/minute, and a roof turret. Additionally it is equipped with a 54-kN (approximately 12,000-pound) winch and a light mast with eight LED lights.

This truck also features Ziegler’s Z-Cab crew cabin with space for nine personnel. The Z-Cab fits on almost every chassis, according to Ziegler. The truck also offers optional operational control via tablet to start and stop the engine and the pump and to manage the winch and light mast.