From six-inch down to 2½-inch intakes and six-inch to 1½-inch discharges, today’s fire apparatus carry an assortment of inlets and outlets—in many different locations—according to the tactical needs of the fire department. Apparatus manufacturers typically talk with departments about the standard inlets and discharges needed for a specific pump size and then add any intake and discharge configuration needed for the department’s specific situation.

Grady North, E-ONE product manager, says, “For E-ONE, there’s hardly a standard inlet and discharge layout anymore because we design the pump modules for every truck we build.” However, North says the biggest trend in pumper discharges is full-width front bumper crosslays. “A few years ago, it was common to see a single 1½-inch preconnect in a front bumper hose well, but now a lot of departments are doing two full crosslays, which gets the hose down low and easy to access for the firefighter.” 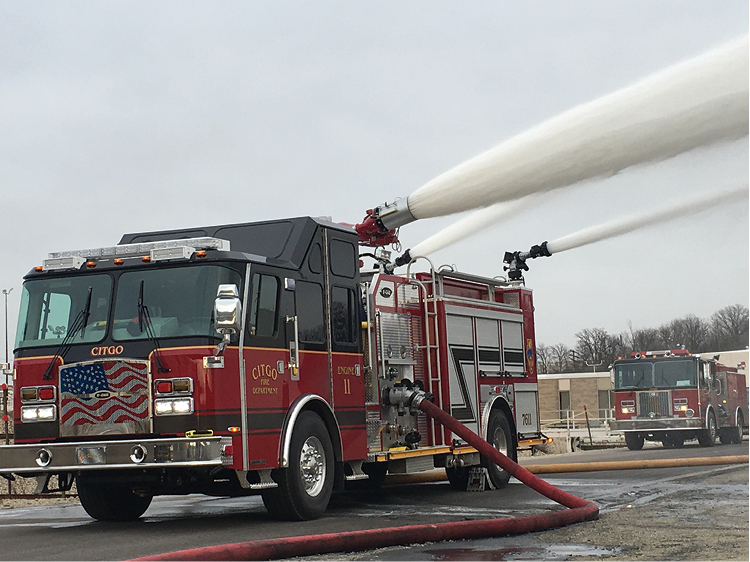 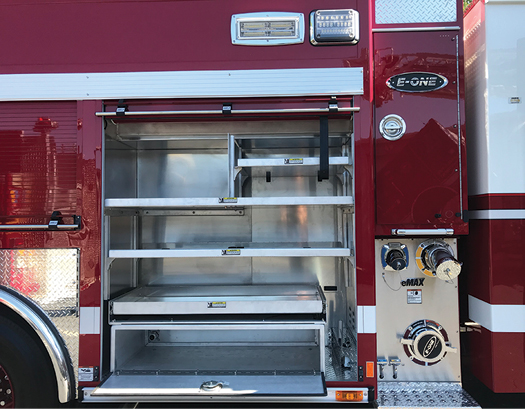 Mark Kopunek, product manager, KME, says the manufacturer has built a number of pumpers for customers wanting double preconnect trays in the front bumper. “We’ve done full crosslays for 1¾-inch hoselines,” he says, “which give better accessibility at ground level. We’ve also built multiple storage wells with multiple discharges and also a single discharge and a six-inch intake with five-inch plumbing back to the pump.”

Larry Segreto, vice president of Boise Mobile Equipment (BME), says his company builds a lot of wildland pumpers. “For our pumpers, gate control always is located at the outlet,” Segreto points out. “And, we don’t put intakes on front bumpers but rather 1½-inch outlets with local control, usually one left and one right.” BME typically will install two rear discharges on its wildland rigs, depending on the pump size—either two 1½-inch outlets or one 1½-inch and one 2½-inch discharge.

Discharges on the Side

Joe Messmer, president of Summit Fire Apparatus, says that no matter how many discharges are on a pumper, 80 percent of those Summit has built have a five-inch discharge off the right side of the truck. “If you need to move water to another truck or portable tank, that’s the best way to do it because a five-inch hose is the equivalent to eight 2½-inch hoselines.” 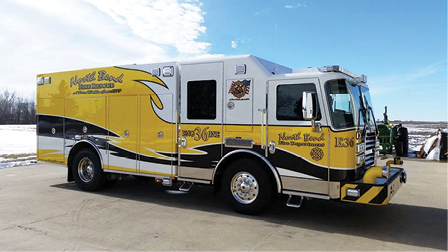 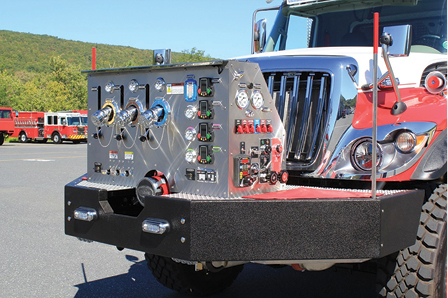 Amey Kelkar, sales application manager for E-ONE, says his company recently built an unusual discharge configuration into a pumper for the Rincon Valley (AZ) Fire Department. “We put in 1½-inch preconnect discharges in boxes in the bottom of the L1 and R1 compartments,” Kelkar says, “which will hold 150 feet of 1¾-inch hose. The department plans on using the lines for brush and car fires.”

Kopunek notes that while side discharges haven’t changed much, they have been lowered as much as possible, especially with the use of speedlays on pull-out storage trays.

Mark Brenneman, assistant sales manager for 4 Guys Fire Trucks, concurs on the lowering of side discharges. “Most departments are trying to keep their side discharges as low as possible to make them easier for firefighters to reach,” Brenneman observes. “We’ve put speedlays on polypropylene trays in the 16-inch space between the cab and a side-mount pump panel that hold 200 feet of double-stacked 2½-inch hose and two triple-stacked 200-foot 1¾-inch hoselines.” 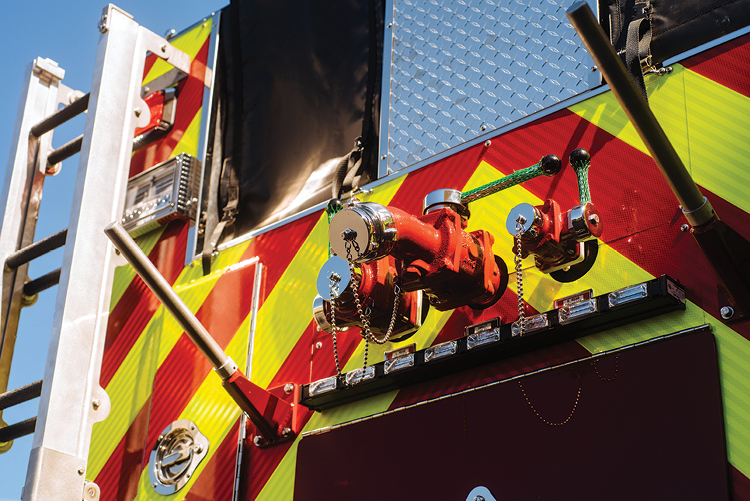 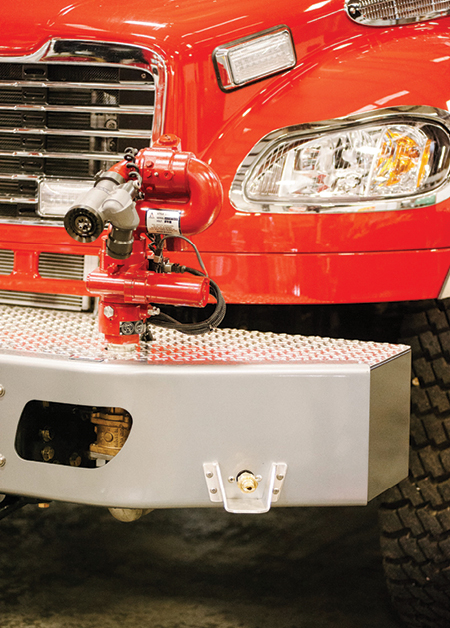 Jason Kline, Colorado and Wyoming sales manager for SVI Trucks, says a number of pumpers SVI has built have a four-inch discharge with a five-inch Storz connection as well as one or more 2½-inch discharges on a side panel. “And, we’re starting to see discharges for decontamination,” Kline points out. “This is a ¾-inch discharge that hooks to a ¾-inch wildland hose that firefighters can use to shower. For one department, we had the decon line run through a heat exchanger to produce warm water for decon.” 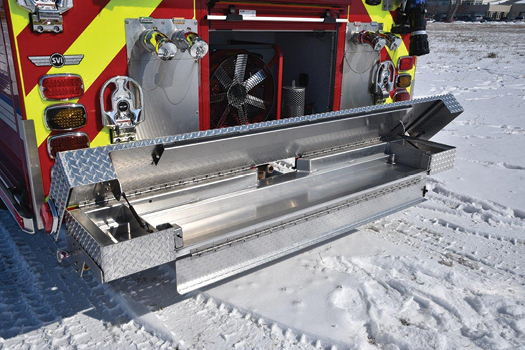 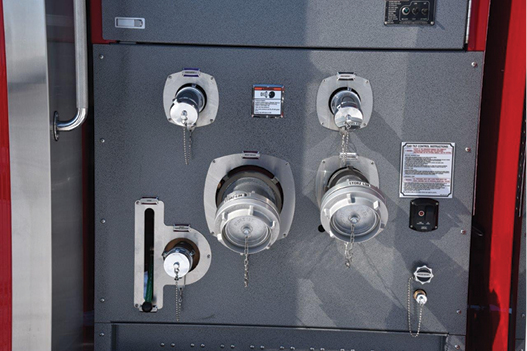 7 SVI Trucks built a full-width crosslay tray into the rear bumper of this pumper. (Photos 7 and 8 courtesy of SVI Trucks.) 8 This curbside pump panel on a pumper built by SVI Trucks contains a six-inch intake and five discharges, including a ¾-inch decon line discharge at the lower right of the panel.

When it comes to industrial pumpers, manufacturers say that the more discharges and intakes, the better. Messmer says Summit recently built three rear-mount pumpers for British Petroleum, one of which went to its Toledo, Ohio, facility and the other two to Australia. “Each pumper has a 3,000-gpm pump and eight discharges, the smallest of which was a three-inch discharge,” Messmer points out. “Each pumper had three six-inch intakes at the rear and a four-inch discharge at the top to supply a Snozzle. The rest of the discharges were located all around the truck.”

John Schultz, director of pumper and custom chassis products for Pierce Manufacturing Inc., says Pierce built an industrial pumper for the Jack Daniel’s Distillery that has eight three-inch discharges in the front of the hosebed. “Their procedure is to back the pumper up to a storage facility that holds barrels of their product and use 2½-inch and three-inch preconnects to extinguish the fire,” Schultz says. 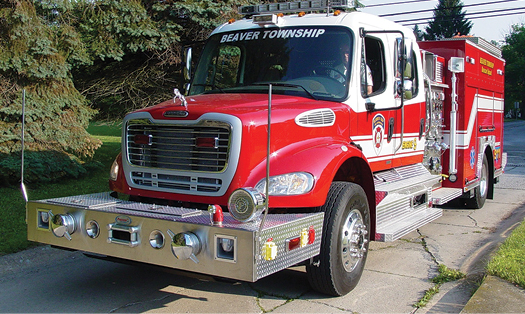 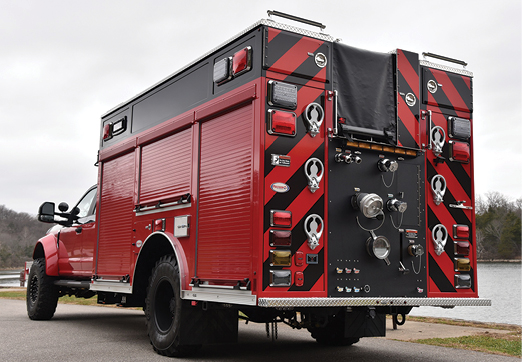 Pierce also has built a couple of unusual roof-mounted turrets on standard tilt-cab custom pumpers. “One of the turrets had a discharge line on it that had to be disconnected in order to tilt the cab,” he says, “while the other one had a flexible connection on it that allowed the cab to tilt.”

North says E-ONE built a 3,500-gpm industrial pumper for PetroChemical in Saudi Arabia that has an eight-inch discharge for a deck gun, two 1¾-inch crosslays, two three-inch hose preconnects, and four six-inch discharges (two on each side of the pumper). The rig also has three slide-out trays under the hosebed to carry dead hose.

Messmer notes that often a department will put a six-inch intake on the front bumper with a large chicsan swivel on it to allow the intake to swing in different directions and not kink the hose. “In the rural world of firefighting, many departments like their large intakes at the rear of the vehicle,” he says. “They can take a pumper with 1,000 gallons of water down a narrow farm lane, set up a portable tank behind the truck, and run a 10-foot suction hose from the rear into the portable tank that’s being refilled by tankers.” 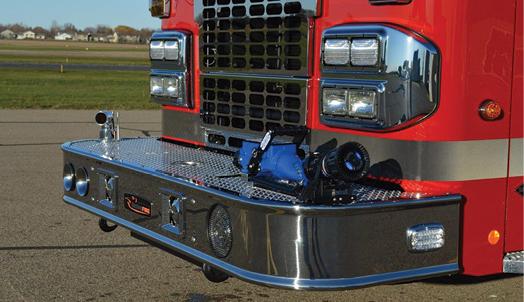 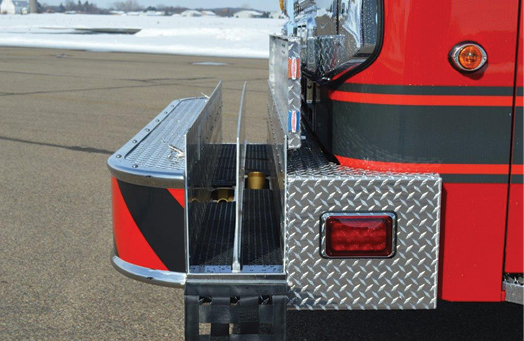 Kopunek agrees that many rural departments like to use rear intakes on their pumpers and pumper-tankers. “They often encounter long driveways where the ability to lay a supply line is restricted by the driveway’s width,” Kopunek says. “With the intake at the rear of the pumper at the house, they can more easily get a water feed from a primary pumping engine out on the road.”

North says that a five-inch intake at the front or rear of a pumper “is pretty much the biggest size plumbing we can route over the axles. A lot of municipal departments like front-mounted intakes so they can point the front of the pumper to a hydrant, while the more rural volunteer departments seem to prefer rear intakes so they can feed a pumper from a portable tank or from a hoseline down a long narrow driveway.” 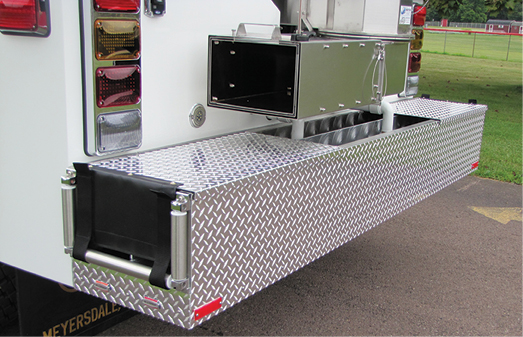 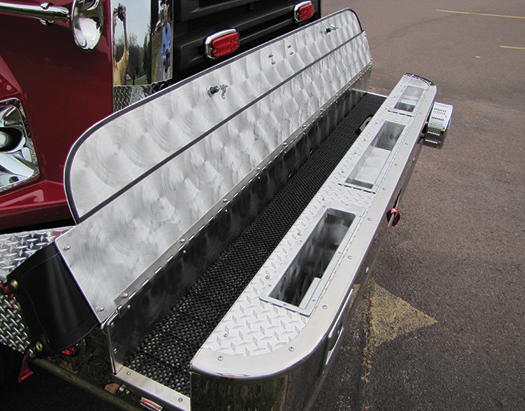 Trapper Meadors, sales engineer for Precision Fire Apparatus, says Precision recently built a pumper-tanker on a commercial chassis for the Beaver Township (OH) Fire Department that has two six-inch front intakes. Pump size on the rig is 1,500 gallons per minute (gpm), while its water tank is 2,000 gallons. 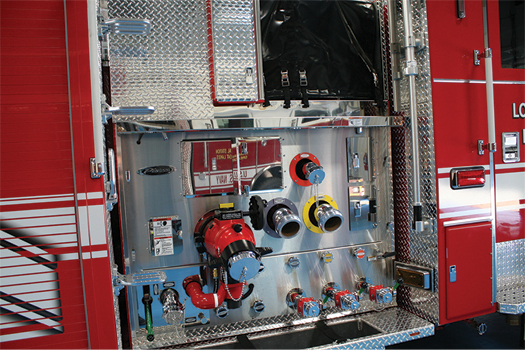 Wayde Kirvida, sales engineer for CustomFIRE Apparatus, says, “Building a pumper with front, side, and rear gated intakes that are preprimed is pretty standard for us now. Ninety percent of our pumpers have six-inch rear intakes that are reduced to five-inch Storz.” Kirvida adds that many departments also have CustomFIRE install cameras near intakes and discharges, especially at the rear or side of a vehicle where the rig might be supplying or receiving water from a portable water tank.

On its wildland pumpers, BME typically will have intakes on the left side and at the rear of the rig. Segreto says, “For a 500-gpm pump, we’ll use a four-inch intake, but most of our trucks have a 250-gpm pump with a three-inch intake, although some have 150-gpm pumps with 2½-inch intakes.”