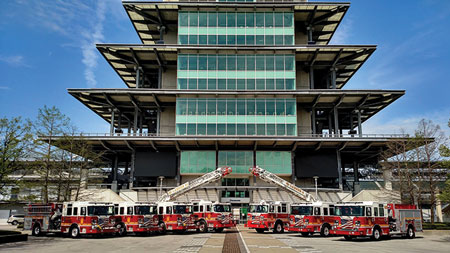 PIERCE MANUFACTURING INC. has placed five Pierce® Saber® pumpers and two Pierce Arrow XT™ 75-foot heavy-duty aerial ladders into service with the Indianapolis (IN) Fire Department (IFD). Each of the five identical pumpers is equipped with a 450-hp engine, a 2,000-gpm single-stage pump, a 500-gallon water tank, a Control Zone™ pump panel, and a full complement of ground ladders.

The pair of Arrow XT 75-foot heavy-duty steel aerial ladders is each equipped with a 450-hp engine and is built on a single rear axle chassis configuration. The cab features a raised and notched roof, a forward-facing EMS compartment, and seating for six firefighters. The storage compartments include dual LED strip lighting and a combination of adjustable shelves and slide-out trays. The three-section aerial device features remote tip controls and a two-way intercom.

KOCHEK has announced company changes, including the introduction of a new online ordering platform designed specifically for dealers, an increase in customer support personnel including a new online “live-chat support” option, and a restructuring within the sales division. Lou Thomas will continue to lead Kochek’s sales force while assuming a new title of director of sales and marketing. Reporting directly to Thomas, Laurie Prucker has been promoted to senior account manager. Rodney Furgison has the new role of national sales manager. Kochek’s new regional account managers include Eric Lane (East Coast), Annie Lussier (Northwest), and Justine Lane (Southwest). David Mihailides will now assume the role of business development manager.

TEMPEST has announced that the Austin (TX) Fire Department (AFD) took ownership of a truck-mounted, large-scale mobile ventilation unit coined the “Smoke Buster.” The AFD’s Smoke Buster uses a Tempest MVU®-L125 mounted in the bed of a Dodge Ram® heavy-duty diesel pick-up truck. The final custom fabrication and installation of the apparatus was delivered by Skeeter Brush Trucks in Hillsboro, Texas. Austin’s acquisition of the ventilator was the final result of nearly 18 months of testing and research. 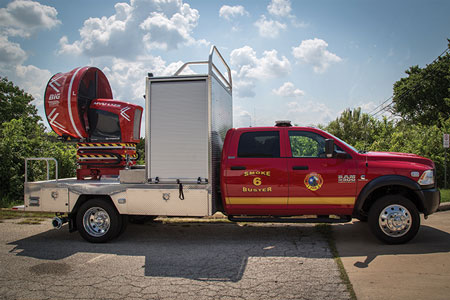 Dallenbach Racing, JAC Racing Promotions, and HOLMATRO RESCUE TOOLS have announced a partnership with Make-A-Wish Colorado to enhance a wish. Quinton, a 17-year-old, was diagnosed with cancer. His wish was to become a professional racecar driver. After a week at the Bondurant High Performance Racing School, he raced at the Pikes Peak Airstrip Attack and attended the remaining events of Speed Week leading up to the 100th Anniversary Pikes Peak International Hill Climb.

Fire departments from around the world can apply for the MAGIRUS “2016 International Firefighting Team of the Year” award through October 2, 2016, at http://bit.ly/295N308. Winners travel to New York to visit the FDNY. In 2016, the award will be cosponsored by ENDRESS Power Generators, DÖNGES, and LUKAS/VETTER. The only requirement for contest entry is that fire departments submit a short report on a mission, including photos.

Have remote shutoffs or controls installed for natural gas, lights, stoves, ovens, garage doors, etc. in the event firefighters leave something on or open. Dispatchers can turn things on and off or open or close items with a computer if needed.