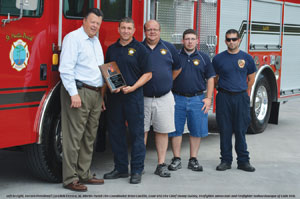 • THEFIRESTORE, a division of Witmer Public Safety Group, Inc., was recently recognized by MSA and FoxFury Lighting Solutions. Both companies honored the dedication and service of TheFireStore to the members of the firefighting community across the country. MSA awarded the company the MSA Cairns Helmets Achievement Award for more than 75,000 Cairns helmet sales during the past five years. FoxFury Lighting Solutions named TheFireStore the 2011 Dealer of the Year for the firefighting, rescue, and EMS market.

• ROSENBAUER‘s premium vehicle class is celebrating a jubilee. To mark the production of the 1,000th PANTHER, three trucks are to be ceremonially handed over to the Stansted-London, Düsseldorf, and New Doha International airports. The vehicles consist of a PANTHER 6×6, a PANTHER 8×8 with short wheelbase, and a PANTHER 8×8. They are representative of the range of variations available.

• IN MOTION TECHNOLOGY announced that the Seattle (WA) Fire Department has deployed its onBoard™ Mobile Networking System to improve fire and emergency medical service responses en route and on scene. The system allows the department to leverage new voice, video, and wireless data initiatives by providing secure, seamless, fast switching in real time between multiple networks.

• PELICAN PRODUCTS was recently awarded the Presidential “E” Award for Exports by United States Department of Commerce Secretary John Bryson at the White House in Washington, D.C. The “E” Awards are the highest recognition any United States entity may receive for making a significant contribution to the expansion of United States exports. Lyndon Faulkner, Pelican’s president and CEO, and John Padian, COO, were on hand to receive the award.

• GELTECH SOLUTIONS, Inc., creators of FireIce, a water enhancing fire suppressant, has announced that Rocky Mountain Fire Company (RMFC) will begin deploying FireIce this month on its ground attack fire trucks when it is engaged in fighting wildfires. RMFC operates a fleet of six wildland fire engines used to fight wildland forest fires for the United States Forest Service and other state and federal agencies. RMFC’s use of FireIce will be on a nonexclusive basis.

• E-ONE, Inc. has appointed Kent Tyler as president and CEO. Tyler replaces Peter Guile, who was appointed CEO of Allied Specialty Vehicles (ASV), the parent company of E-ONE, in January. Tyler most recently served as president of Collins Bus Corporation, also an ASV portfolio company. Tyler will continue to lead Collins Bus for the immediate future in addition to his new responsibilities at E-ONE.