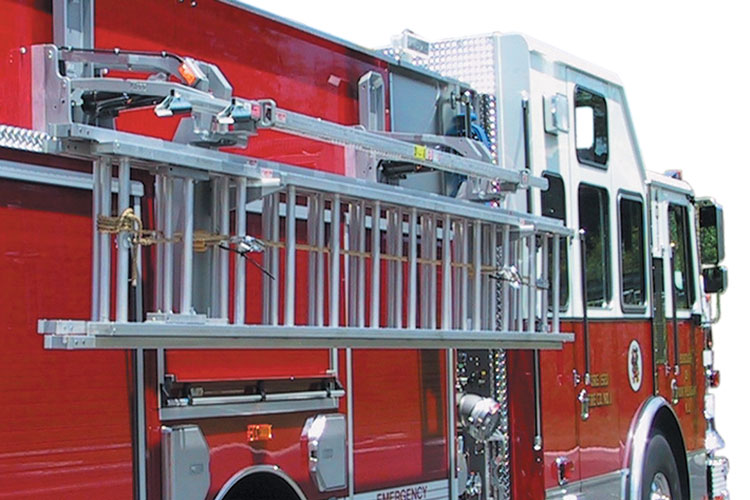 With fire apparatus getting taller and longer, firefighters have turned to electricity and hydraulics to help them get equipment on and off their trucks.

The hydraulic LAS uses electric over hydraulic encapsulated actuators, stores the ladders horizontally on top of the vehicle, and swings them down 48 inches for deployment, according to Adams. “Our center-mount single-arm ladder rack also stores ladders horizontally on top of the truck,” Adams points out, “and brings them down to a vertical position for firefighter use at about waist height. This type of system is often used on vehicles with high side compartments.”

Trapper Meadors, sales engineer for Precision Fire Apparatus, says that Precision manufacturers its own style of electric-over-hydraulic ladder rack. “It’s a single-arm rack that, once it swings out and down toward the ground, pulls back in toward the truck so the ladders don’t stick out so far away from the body,” Meadors points out. “It allows firefighters to deploy the ladders when they are in tight spots.”

Steve Touchton, emergency specialty product manager for ROM Corporation, says that while ROM makes Ergo Rack hydraulic ladder racks for commercial use-but not for the fire service at this time-its racks could be adapted to a Ford F-550-size vehicle or a Ford Transit-type van. “The system uses a hydraulic lever to counteract the balance so we are able to lower a 24-foot extension ladder gently to the ground by hydraulics over air cylinders,” Touchton says. “Depending on the vehicle and the type of ladders, some systems can be angled to the ground to allow one person to handle the ladder.”

Ryan Slane, product manager for pumpers and tankers at KME, notes that when fire departments spec an electric/hydraulic ladder rack for their fire vehicle, “using the overhead isn’t an issue because you are not sacrificing anything other than void space for the rack’s actuators.” Slane notes that putting ladders on powered racks “allows more compartmentation on a vehicle, without having to modify lower compartments or alter water tank capacities because of ladder tunnels in the tank.”

Slane says that KME built a pumper for the Stony Point (NY) Fire Department that included a Zico standard ladder rack on the officer’s side, “but they didn’t want the ladder side to look uneven from the driver’s side of the body, so we put on a beautification panel that extends down to the bottom of the ladder rack.”

When it comes to hosebeds, a number of departments are moving toward powered, hard shell hosebed covers. Touchton says ROM makes a powered cargo hosebed cover for fire vehicles that’s driven by a 1⁄3-horsepower 12-volt electric motor using a 40:1 reduction gearbox. “It allows us to develop exceptional torque and controls the speed of the cover,” Touchton points out. “It’s a chain-drive system after it leaves the gearbox, using an industrial roller chain over two metal sprockets that drive the gears that grab the aluminum shutters making up the cover.”

The cargo hosebed cover has an 800-pound load bearing surface, Touchton notes, and has a slip-resistant surface because of friction tape made by 3M Corp. The unit is available in a full-power model only but has manual overrides built in.

Slane says his company built a two-piece powered hosebed cover for Ottawa (Canada) Fire Rescue out of aluminum treadplate, one side wider than the other, driven by electric-over-hydraulic dual actuators. “We also make a Lock-N-Load manually raised hosebed cover assisted by pneumatic gas shocks,” Slane adds. “If you have a low-height station and you can’t raise clamshell covers, this model slides up and back to give you the clearance you need.”

Chris Payette, assistant chief for the Grosse Isle (MI) Fire Department, says Grosse Isle bought a KME Predator chassis pumper that has a ROM roll-up hosebed cover and two enclosed Zico electric-over-hydraulic ladder racks, one on each side of the rig. “The ROM hosebed cover rolls up like a door would on a compartment on the side of a truck, only it rolls up into the front of the hosebed,” Payette says. “There’s nothing sticking up in the air, and everything is out of the way.” On the issue of the enclosed ladder racks, Payette notes, “We wanted to keep our ladders clean and safe from debris.”

In addition to ladder racks, Adams says his company makes an electric-over-hydraulic rack system specifically designed to handle portable folding water tanks. “It mounts on the side of the truck and stores the tank upside down so in its stored position, water will drain from it,” Adams says. “When deployed, the rack spins the tank 180 degrees and down to the ground, ready to be opened up.” The Zico water tank racks can handle portable tanks from 1,500 to 3,000 gallons. Zico also has kits and adapters available to accommodate elliptical water tanks, Adams adds.

Some departments carry their hard suction hose in powered racks, Adams points out. “We’ve done suction hose racks with up to four sleeves in the rack and another one on top,” he says.