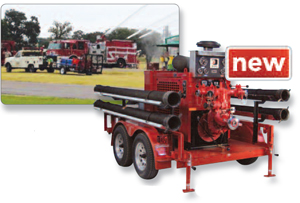 At FDIC attendees will often find products that make more sense at the municipal level than at the company level. At FDIC 2014, W.S. Darley is introducing its self-testing hydrant booster. Installed near a water source such as a holding tank, this product is for rural towns that need a hydrant system, but cannot afford the infrastructure. “Most rural fire departments will have some type of water storage,” says Paul Darley, president and CEO of W.S. Darley Company. “Many of these rural communities have no fire hydrant system. We’re working with a lot of developers on it, where some type of hydrant system is required but they don’t have several million dollars, in some cases, for the infrastructure.” The hydrant booster is self-testing, testing itself every two weeks. It will send a text message or an email to the fire department or city manager. “The chief knows: like any pump if it doesn’t get exercised, it’s going to seize up. So, with it going into an operating mode every two weeks, the pump gets properly exercised.” 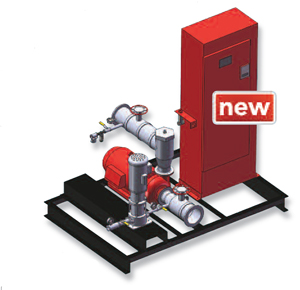 Also being introduced this year is the company’s ZSE engine-driven pump. It is suitable for industrial firefighting applications and also includes Darley’s electronic control panel, featuring telematics. Kyle Darley, design engineer, says, “Telematics is the communication that we are using to send out alarms. Any serviceable point whether it be fuel, oil, oil temperature, oil pressure, or radiator fluid temperature—if it’s at a warning state or a state where it may cause some failures, we send a text message or email out, and users can remotely operate the units via the Internet.”

About FDIC, Paul Darley says, “FDIC has really grown into the preeminent fire show in the United States. Because it’s held during the beginning of the year, many companies are releasing products that they worked on since the show circuit ended last year. Indianapolis is a great city—reasonably priced, easily accessible and not too many distractions that can tend to keep attendees away from the show floor. The unique balance of hands-on training coupled with an excellent exhibit space makes for an winning combination.”