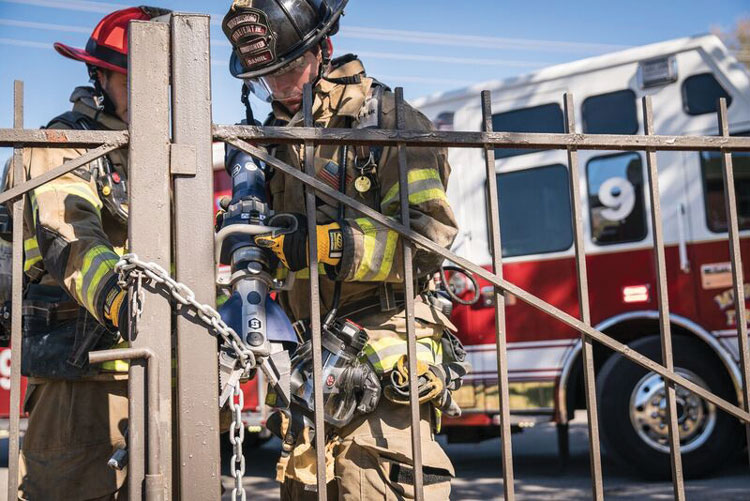 When considering the types of apparatus fire departments run all the time and some of the apparatus police departments often buy, the similarities are striking, particularly on rescue-type vehicles.

It stands to reason that some of the equipment used by both agencies would also be similar or, in some cases, the same. Such is the case with the Hurst Jaws of Life StrongArm® rescue tool. This device was originally designed for use by rapid intervention teams (RIT), but according to Bruce Johnston, director of marketing and product management at Hurst Jaws of Life, Inc., voice of the customer (VOC) research revealed that it also met other needs. “After conducting extensive VOC research,” he says, “we discovered that the StrongArm tool could fill many critical needs faced by firefighters on tactical rescue or rapid intervention teams, law enforcement officers, and SWAT teams.”

According to Johnston, the tool is a lightweight (25 pounds without power pack), 31-inch, battery-driven hydraulic multipurpose rescue tool. “Customarily, firefighters, law enforcement officers, and SWAT teams have had an arsenal of tools to choose from in the field, but StrongArm does it all,” he says. “It provides one powerful, yet portable, tool that lifts; cuts; spreads; breaches metal or wooden doors; cuts through chains and 3⁄8-inch rebar, security bars, locks, and 2×4 wood; and is IP54-protected.” In addition, Johnston says the tool is powerful enough to pry open automobile doors.

Johnston adds that the tool is designed to operate in heat and smoke environments. “With a Picatinny rail and four-position handle, it replaces crowbars, halligan bars, wire cutters, axes, and much more,” he says. Each tool comes with two sets of tips (door opener and combination), two lithium ion batteries, and one charger. It comes in two colors: blue for fire department use and black for law enforcement use.

Research and development for the tool had actually already occurred during the development phase of the company’s eDRAULC® line of electric-hydraulic tools. “The eDRAULIC rescue tools operate with an internal hydraulic pressure that generates the same force as the power-unit-driven tools,” says Johnston. “Using electric-over-hydraulic force eliminated the need for power units, hoses, and reels. This eDRAULIC innovation provided much of the research and development needed for the StrongArm rescue tool. That, combined with the VOC research, birthed the StrongArm tool. Prototypes were put through their paces with the Charlotte (NC) Fire Department and Charlotte Fire Department Training Academy.”

The Athens (TN) Fire Department is an existing Hurst Jaws of Life customer, running both eDRAULIC rescue tools as well as traditional hydraulic rescue tools attached to reels attached to a truck. Already being customers, the department turned to Hurst when it was looking for an additional forcible entry tool. “We were looking for another forcible entry tool, and we wanted something that would handle RIT as well as being lightweight without having to deal with power plants,” says Jim Dyer, chief of the Athens Fire Department. “We are very familiar with Hurst, and we talked to our rep for Hurst equipment. The StrongArm was just coming out, and it was reasonably priced in comparison with a lot of other tools.”

According to Dyer, the department was able to purchase two StrongArms, one for each engine, with a Firehouse Subs Hero grant. Understanding that the tools are also for use by law enforcement, the department purchased one blue and one black. “When we heard that, we said, ‘OK, we can help our SWAT team if we want to,’ ” says Dyer. The two tools are identical, except the black tool’s light does not turn automatically so as not to give away a SWAT team’s location. Dyer states that the police and fire departments share a building, so the SWAT team can come and take the tool when needed. Or, Dyer says the fire department will respond with the tool to a specified location, although it will not operate the tool at the police incident. Dyer’s team has trained three members of the SWAT team to use the tool.

Captain Brandon Ainsworth adds that the department has conducted training for its own members in its use as well. “We’ve used it during training around the station, learning its operations, how to change the tips, and cutting and prying things,” he says. Personnel had practiced prying doors with it as well but had not trained for what they faced in late November 2016.

In the early morning hours of November 30, 2016, a tornado touched down in Athens, Tennessee. The EF-2 tornado had winds of 111 to 135 miles per hour, and its path was approximately 12 miles long and 200 yards wide. There was widespread damage and up to 20 reported injuries. Most injuries were minor, with only a few people transferred to other hospitals for elevated levels of care.

The Athens Fire Department is a combination department with a career staff of 21, seven per shift. The department runs two engines, one ladder, and one rescue. Its volunteer staff consists of 12 members, half of which are career firefighters at other nearby departments.

In Athens’s first due, there were 97 homes and 30 commercial occupancies damaged by the tornado and related severe storms that swept through the area. The fire department responded to one structure damaged by down trees. The residential structure had an apartment attached to the back, and an elderly couple was trapped by the felled trees. “We were unable to access them from inside the original home,” says Ainsworth. “So, we had to penetrate what was originally the exterior wall to get to these two folks.” Ainsworth says the wall was constructed of common materials but had also been covered with lap siding. “It’s very tough stuff to get through,” he says. “Most of the time we run into it on the ceiling, but in this case it was actually on the wall.”

Ainsworth’s crew initially went to work using hand tools like axes and halligan bars, but the process was not moving fast enough for Ainsworth. “Since the StrongArm was a new device for us and we hadn’t actually used it in an emergency situation, I thought I’d give it a try.”

Working in a confined area was one reason Ainsworth called for the StrongArm. The other reason was because traditional hand tools just weren’t making the progress necessary for the rescue. With the StrongArm, “We started out trying to put it right in the seam and pry it apart,” says Ainsworth. “Once we’d get a piece off, we took the ends of the tool and compressed [the siding] and mashed it, popping it loose.” Without needing to change a battery, Ainsworth’s crew was able to clear an opening for the elderly couple to climb through.

Overall, the firefighters with the Athens Fire Department are pleased with the tool so far. “From a chief’s perspective, it’s a great tool as far as another tool in the toolbox,” comments Dyer. “It’s real lightweight. It’s a versatile tool. You know how firefighters are – they want something that’s quick and easy. This tool meets those needs. I’ve been happy with it.”

CHRIS Mc LOONE, senior editor of Fire Apparatus & Emergency Equipment, is a 23-year veteran of the fire service currently serving as a safety officer and former assistant chief with Weldon Fire Company (Glenside, PA). He has served on past apparatus and equipment purchasing committees. He has also held engineering officer positions, where he was responsible for apparatus maintenance and inspection. He has been a writer and editor for more than 20 years.