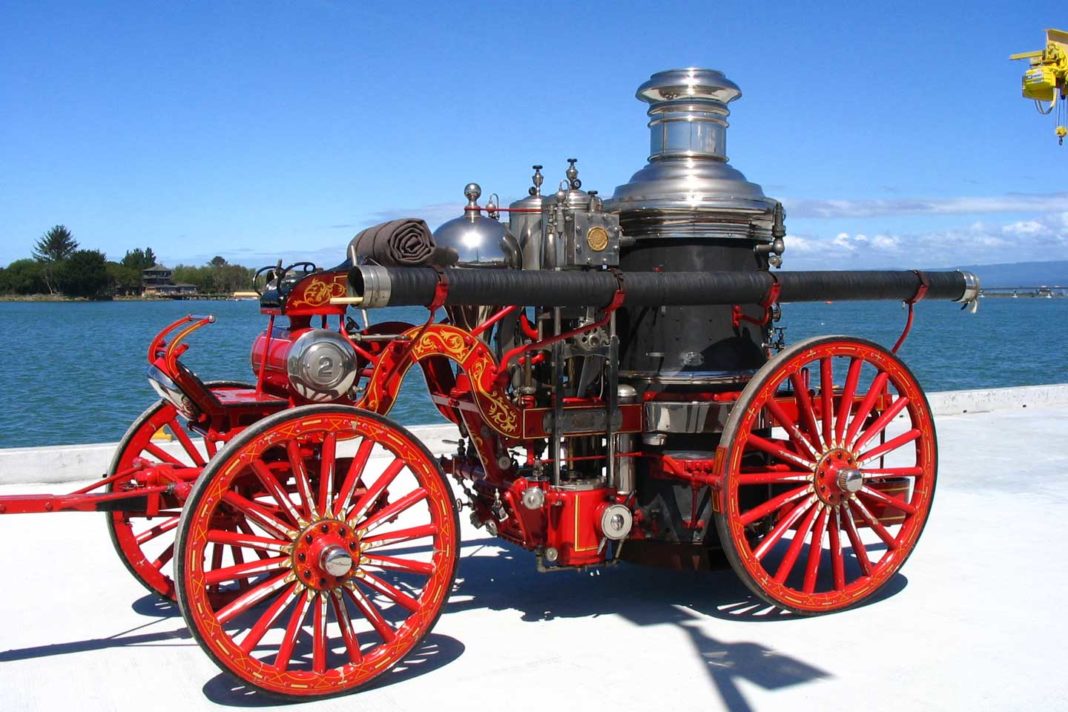 A recent vacation to northern California and a visit to Humboldt Bay Fire gave me a chance to see an unusual piece of new apparatus and find a very interesting piece of vintage apparatus that can still pump. When I think of antique fire apparatus my thoughts go back to the 1920s and 1930s from the early motorized era. A horse-drawn 1904 Metropolitan Extra First Class Steam Fire Engine manufactured by the American Steam Fire Engine Company of Seneca Falls, New York, was an unexpected find when I stopped at the downtown Eureka, California, fire station.

Any time my travels take me to a new location there usually is a stop at a fire station. I am always interested what apparatus is in service with the local department. Once in awhile there is a bonus of finding a vintage motorized rig that has been kept or restored for special events and parades. There is much pride in the department to show a piece of its history. Humboldt Fire Authority provided both interesting new apparatus and a vintage horse-drawn steamer pumper.

The main downtown fire station houses several pieces of front-line and reserve apparatus. I was barely on the apparatus floor when its main piece of apparatus returned to quarters—a 2013 Pierce Arrow 100-foot TDA with a 1,500-gpm pump. We don’t see all that many tillered rigs in the Midwest, and a tiller ladder with a pump is even more rare. The real surprise was sitting in a back corner of the fire station. There sat a nicely restored 1904 horse-drawn pumper.

Chief Sean Robertson heads a fire suppression team of 57 responding from five fire stations. They serve an area of 50 square miles with a population of approximately 55,000. The Humboldt Fire Authority was formed in 2011 with the consolidation of the Humboldt No. 1 Fire Protection District and the City of Eureka Fire Department. The Eureka Fire Department formed in 1864 as the Eureka Fire Company, a volunteer fire department. In 1929, the Humboldt Fire District was formed to provide protection to the growing unincorporated areas near Eureka. Knowing the background helps to tell the story of the 1904 steamer pumper. There would be two Silsby steamers that would serve Eureka prior to the arrival of the 1,100-gpm Metropolitan steamer. The six-ton steamer arrived at Eureka via the ship “Panama.” At that time, it was one of the three heaviest steamers on the northern Pacific coast. The cost of the pumper was $6,375. One of the tests the pumper had to pass for acceptance was to throw water over the top of the Humboldt County Court House tower. The stream of water cleared the statue on top of the tower by 10 feet. For the next 30 years, the steamer pumped at fires. A May 1935 fire at a mill would be the last fire fought. Fortunately, the steamer did not go away in retirement.

In January 1976, Eureka Fire Fighters Local #652 elected to take on the complete restoration of the horse-drawn steamer pumper as a bicentennial project. By the summer of 1977 the project neared completion. $6,400 had been raised, and 10,300 personnel hours had gone into completing the project. Members of the Eureka Fire Department performed mechanical repairs, painting, gold leafing, woodworking, and blacksmithing.

What is most interesting is that this project was completed more than 40 years ago, and the steamer is still very much in good repair to the extent the steamer can still pump. The steamer pumper puts on a pumping display at Fire Prevention week and other special events. The steamer goes through a comprehensive boiler inspection every year that can take up to two days to complete. The big pumper is also paraded using a three-horse hitch. The pumper is a wonderful example of fire apparatus that served 115 years ago.

When it comes to vintage fire apparatus, Humboldt Fire has still more to offer. Two additional vintage fire trucks are stored in unstaffed fire station No. 6. A 1928 American LaFrance 1,000-gpm pumper and a 1926 Seagrave model 6 BT pumper are also kept in very good display condition. The Seagrave did not serve with the Eureka Fire Department. It is a gift from Harvey Harper, an area collector. Mr. Harper donated the rig with the condition that the historical vehicle was never to be sold. The department actually had a 1929 Seagrave pumper that was sold.

My time spent with Humboldt Bay Fire was a pleasure that combined new and vintage apparatus as well as an opportunity to visit with downtown firefighters and watch other fire companies complete training exercises at the department’s drill tower.

Humboldt Fire has a treasure in their vintage apparatus—horse-drawn and early motorized. My thanks to Robertson for his help with information for this feature.

Do you or your fire department have an interesting vintage fire apparatus that has a story that can be shared? Drop me an email at ron.lois224@gmail.com. Let’s get together!